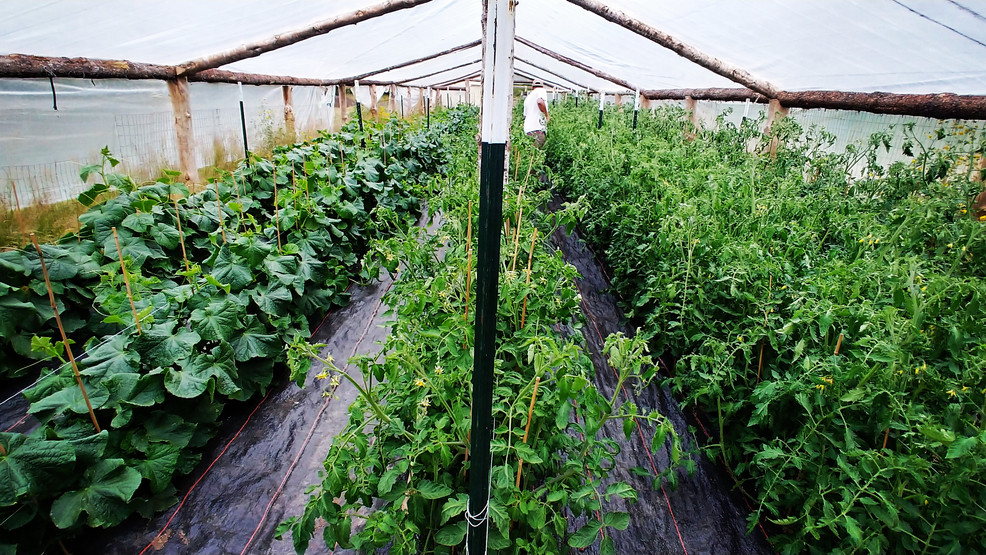 Bil Thorn and Kate Harwell have been working in agriculture since their teenage years. In high school, Harwell judged and showed livestock. Thorn started landscaping when he was 12 years old, working with his grandfather, who ran a landscaping company.

The couple met over 20 years ago in Sonoma County and hit it off immediately because of their shared love of the outdoors. She was 19, and he was 20.

After several attempts at running a farm in California, dry wells, unaccommodating landlords and inaccessibility led them to Humptulips, Washington, where they run Sky Island Farm, a 15-acre vegetable, herb, fruit and flower farm. Everything is grown using organic, sustainable and regenerative methods.

The Black-owned farm operates the first and longest-running Community Supported Agriculture (CSA) in Grays Harbor that serves 150 members. Their efforts have inspired other small farms in the region to offer CSAs, and regional farmers' markets started because of them.

One of their biggest challenges has been convincing the seafood-eating meat and potatoes loving community to eat their vegetables.

"It's taken all sorts of creativity to try and entice them to eat more veggies," said Thorn. "Our approach is mostly exposure and promoting the idea of healthy foods."

Thorn and Howell spread the word by talking to as many people as possible, hosting student field trips and including recipes in their CSA deliveries. Before COVID-19, Sky Island Farm partnered with the Coastal Harvest farm to pantry program and provided fresh organic vegetables to Grays Harbor Community Hospital.

Land cultivation runs in Thorn's veins. His great-grandparents were also farmers. When Thorn was a teenager, he got a job on a large estate with organic gardens, including a large vineyard operation.

"That's where I really started developing a love of organic farming practices," said Thorn. "My boss had a degree from Santa Cruz in organic farm management, so he was a wealth of knowledge for me."

Thorn took advantage of the knowledge at his fingertips and absorbed as much learning as possible from his boss.

After that job, he started working for a commercial landscaping business. He'd bring home plants that would otherwise be tossed from the landscaping jobs.

"A lot of times places are getting rid of perfectly good plants, so I'd rescue a lot of these plants," he said. "We started collecting plants that way."

That collection eventually amassed to over 1,000 plants. When a landlord wouldn't allow them to plant their plants where they wanted, they began to look for alternative options to carry out their agricultural dreams.

One of their Humptulips property draws was the abundance of water and the proximity to sizable markets where they could sell their products. Their "more accessible" property in California included a two-mile-long driveway with a 1,000 elevation gain in the last mile.

The beginning years weren't easy, however.

The house was a disaster, and one of the two wells on the property ran dry. Further, Thorn made the 5-hour community to Seattle for several years to bring in necessary income to bring the farm to where it is today.

"It was really tough. We struggled financially, but we're doing well now," he said. After six years on the property, they have acquired most of the tools they need.

Eventually, Thorn and Harwell want to expand beyond providing food to the community and include an educational component by holding gardening classes, youth programs and teaching visitors how to forage and then turn those finds into delicious, healthy meals.

They recently created a GoFundMe to raise money to build a dozen small structures to serve as accommodation for guests and interns and build a small commercial kitchen with a larger outdoor cooking facility.

One of Thorn and Harwell's driving motivations to do what they do is inspire younger people to embrace farming.

The couple's children, ages 13 and 15, are homeschooled and help out on the farm.

"The main attraction of having the farm is being able to spend time together as a family," said Thorn. "Not many professions allow for families to spend that much time together. It's a rarity these days."

Thorn fears that the shift toward easier ways to make money will create the space for big ag to take over food and land cultivation.

"It's a way of life that I don't want to see end," said Thorn. "It's a much healthier way to live. If we don't step up and fill the void, someone else will. Farms are shutting down, and the age of farmers is increasing. It's important for young people to get out on the land."