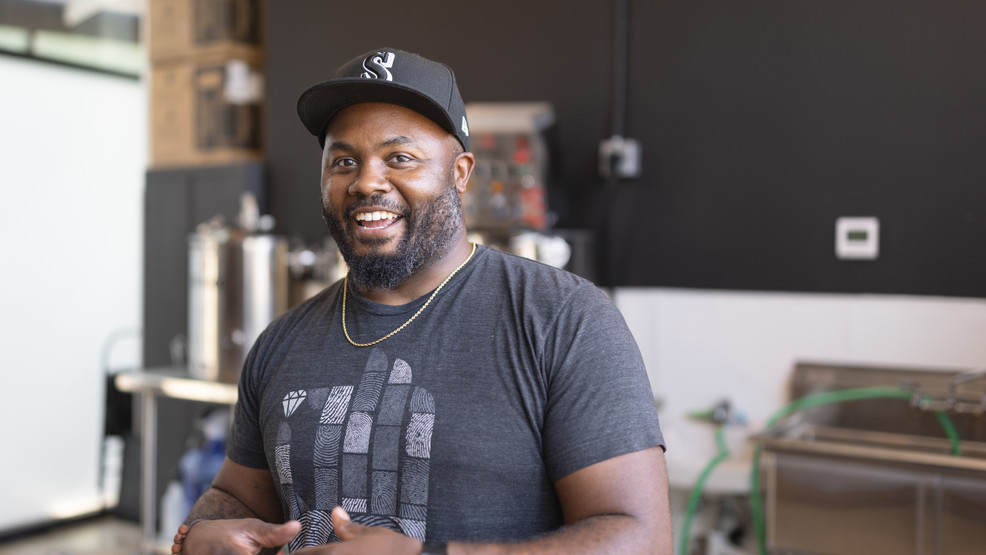 23rd Ave Brewery is all about community and really good beer

The new 23rd Ave Brewery is one of two Black-owned breweries in Seattle’s Central District. They opened during the Juneteenth holiday weekend and sold out of their beer inventory in The Can Shop in less than an hour. David Dixon, one of the co-owners and brewers at 23rd Ave, said it felt so good to have such a strong turnout on day one. In fact, when I first talked to David, he said they have since sold out of beer every day they've been open. He hopes there will start to be some beer leftover at the end of the day for the owners to enjoy.

I met up with David in the brewery on 23rd and Jackson. It has a small, unassuming exterior, with just a logo on the door telling you where you’re at. Heading into the shop, it’s a beautiful little room with a counter and a few chairs, but mostly pretty minimalist and clean. This space lets beer be the focus.

It wasn’t always about this one room, though. 23rd Ave Brewery is owned by Mario Savage and David and James Dixon. They grew up in the Central District hanging out in the basement of David’s dad’s house, which doubled as a community place. His dad was happy to have them down there to keep them out of trouble. And they were happy to have a safe place to be kids.

The owners grew up together and later enjoyed beer, so when it was suggested that they start brewing beer, they all excitedly agreed. They made a plan to meet the next day at 7 a.m. David recalls being genuinely nervous because he took the prospect so seriously, but was nervous he was the only one who did. But when 7 a.m. rolled around, all the other guys showed up on time ready to go. They brewed their first beer, which (even though they forgot an ingredient) turned out well and they all enjoyed it. They then branched out and did two other beers, and, laughing, David recalled that they were horrible.

They’ve come a long way since then. Like so many businesses, they were originally set to open in 2020, and then the plan changed. That allowed them to get the space they are in now, which is a prime location. They opened on June 18 to a very excited crowd. David said the thing he wanted to focus on was community, and they've done just that. The community has turned out to support the brewery owned by, what David’s uncle calls, "neighborhood legends."

I got to see the power of word of mouth in action when one customer told a friend about 23rd Ave. The friend came in excited to learn about the shop and grab some beer. A short time later, the friend returned to grab a few more because they had one sip and said, "Oh yeah, it took only one sip to know I'd want more!"

David laughed and told me, "It only takes one sip, quote that!"

While I was there, David opened up a beer named The Marsh, and while they aren’t allowed to have public drinking, they are allowed to have private tastings. The Marsh is a Stout brewed with marshmallows to add a little creaminess. This isn’t Guinness and isn’t meant to be, this is something else entirely. The beer itself is smooth and delicious and sure to be a huge hit this fall during cooler months.

23rd Ave currently cans all their beers and tends to have only 1 available at a time. They are looking into taps so they can fill growlers and are hoping to have all 5 of what they consider their staple beers available all the time. Currently, their staples are The Marsh, the Basement Stout, Black & Gold, Pepper Peach, and a Pineapple IPA.

Right now, they are focused on building their production and getting established enough that they can be open throughout the week. Especially since they keep selling out of their entire stock, which is a nice problem to have.

They also are available for private parties. David told one customer they could host about 15 people and could throw on a game or fight on TV. Seems like an excellent place to gather your crew and try some delicious brews.

Jeffrey Martin is a freelance writer and photographer for Seattle Refined. See more of his work here.