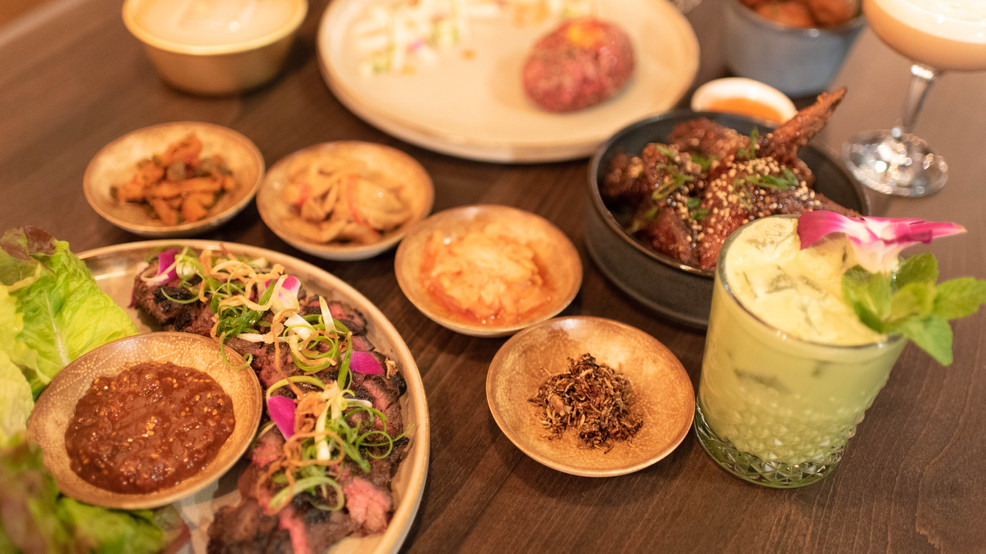 "I hope we can give our guests not just memories of delicious food, but also comfort," Yoo explains of the exquisite Korean menu. "I hope when folks think of WeRo, they'll remember not just what they tasted, smelled or saw, but also how they felt. Even though the flavors may be foreign to many guests and my nostalgia unknown, I believe food has the power to make folks feel comforted like I was."

Yoo was born and raised in Korea and moved to the U.S. as a teenager.

"I didn't know at the time, but my early years in Korea and the visits to parents since would become the foundation of my work," he says.

When the pandemic hit and everything shut down, Yoo, like others, re-evaluated many aspects of life.

"It was tough having my business shut down due to COVID. But from the chaos, a purpose rose. I wanted to do more than try to make a profitable business."

At the time, Yoo reconnected deeply with his culture, which he vowed to represent with pride. The tenuous political climate also affected him greatly.

"When there was unrest after George Floyd was killed, it was an intense time throughout the country," Yoo shares. "What caught my attention during this time was the international support for this cause. I thought about everyone in the Black community who had represented their culture and told their stories for years. I wondered if they hadn't done that, would there be protests about this American man in Europe, Asia and throughout the world. When the violence against Asians in America started skyrocketing, it reinforced my views even more greatly."

Yoo created a pop-up takeout business out of necessity — and perhaps some desperation. At the time, his business had closed and the future was unclear; he felt like he needed to do something.

"When the pandemic started and I was quarantining, only taking trips to the grocery store," he recalls, "I had a realization one day. I had only had Korean food meal after meal. Having been in the U.S. for a long time, that wasn't the case in my life until the pandemic. I realized that no matter how much time I spend here, my roots, my childhood and my family are in Korea; I'm Korean, and that was my comfort."

As Washington state progressed through lockdown phases and his business gradually reopened, Yoo felt like it could survive. Yet, he had found a new purpose: he desired to focus on Korean food.

"I wanted everyone else to feel good from it," he says, "I also wanted to showcase the cuisine in a different light. The Korean dining scene felt like it was either Korean fusion or rustic, mom-and-pop type. Both are fantastic, for the record."

However, he felt there must be a way to maintain authentic flavors while also elevating things.

"I wanted to show that Korean food could be upscale while still keeping the comfort element," he says. "I also wanted to showcase Korean flavors in cocktails and how the cuisine works well with craft cocktails. So WeRo was born."

Yoo believes that food is a direct representation of people and their lives, "The Korean people have been on the Korean Peninsula for thousands of years. Our climate of cold winters led to lots of fermented and cured foods. The land having lots of mountains led to extensive uses of namul — a variety of edible greens, leaves and herbal dishes."

Korea being a peninsula with many coastlines has led to a variety of seafood not only being consumed as a main protein, but also to impart flavors to other ingredients (fish sauces, dried fish, seaweed, etc).

"Korea having the climate range of hot summers and cold winters and having tall mountain ranges to the east, low mountains and fields to the west," he adds, "can all be attributed to explain what ended up on our dinner table."

The restaurant’s menu is currently small, due to staffing challenges and the restaurant’s compact kitchen, yet Yoo is eager for it to expand very soon. Their most popular dish —and probably his favorite — is steak ssam, prepared with American Wagyu beef from Snake River Farms. They use a cut called zabuton, which Yoo deems "a beautiful underrated cut, often considered a butcher's cut." They marinade the beef in their housemade kalbi sauce and serve it with banchan, Korean-style side dishes and a variety of leaves to make a ssam (Korean lettuce wraps). There's also a housemade dsamjang, a common dipping sauce.

"This dish is typically done with short ribs," Yoo explains. "But it's a great example of how we elevate the dishes while delivering the authentic flavors."

Yoo is also very partial to their yookhweh — a Korean version of beef tartare, in which they use prime tenderloin.

"We cut and sauce it all to order so it's super fresh," he says. "The dish delivers a lot of umami flavors. We serve it with Asian pear batons. Pears are the most classic pairing for yookhweh. It's juicy and fresh and cuts through the richness and salt of the beef. Along with them, we serve the dish with pine nuts, micro radish greens, shilgochu (Korean chili threads), quail egg yolk and more."

A memorable comment on this dish was served a few weeks ago when a guest from Korea told Yoo it tasted just like the yookhweh they get in downtown Seoul.

A myriad of challenges come with opening any restaurant, and Yoo says that pandemic-era staffing has been the biggest.

"It's been growing slowly, but we're going with perseverance and patience and doing everything we can to make sure we're making ourselves a great workplace," Yoo says.

Of course, plenty of rewarding elements accompany opening a restaurant, too.

"I'm thankful for my staff, first and foremost, as they've bought into the message we're trying to deliver with this brand," Yoo says. "But, of course, it's really rewarding talking to happy guests. Hearing from our Korean guests — some born here, some only visiting here and everything in between — about how it reminds them of home or family, is just as rewarding as observing our guests from different backgrounds trying something new to them."

"I believe the reason why we gravitate towards familiar foods we grew up with is because we remember how it felt deep down, instinctively," he adds. "Like how a baby can be comforted by being held close to mom's heartbeat. We may not be thinking it actively, but we know what brought us comfort."

"I have one rule with the dishes we do," he explains. "If I'm confident that I can give a dish to my parents who live in Korea and have them say, ‘You know, this looks different than what I'm used to, but I can tell this is dish xyz,’ then it passes. If I feel my parents would say, ‘Hey, this tastes good and all, but what is it?’ then it doesn't."

In uplifting news, Yoo’s mom just visited the restaurant a few weeks back. The verdict? All of the dishes passed the test.