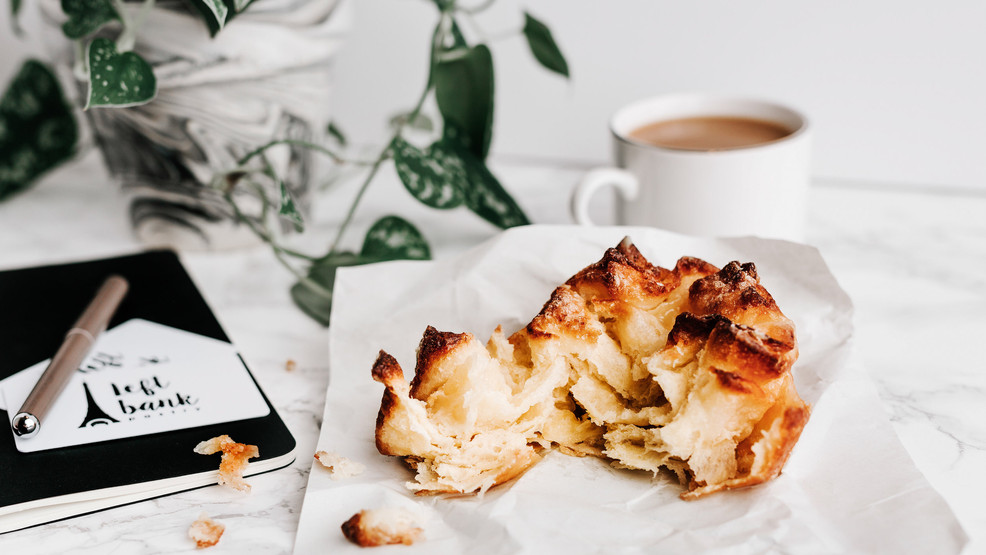 Olympia's Left Bank Pastry is a no nonsense French patisserie

Since traveling to Paris isn't really an option at the moment, those near Olympia can still taste French pastries at Left Bank Pastry. Most mornings, the line for baked goods stretches around the corner of 4th Avenue and Quince St. E.

"We've always had a line on Friday, Saturday, and Sunday mornings - but it's never been down the block until after we reopened from coronavirus," said owner Gary Potter.

Founded in 2011, Left Bank Pastry is a no-nonsense French patisserie. While Potter has been pressured to turn out cupcakes and other trendy items, he consistently stands by his French baking roots.

"If it's not French, it's not happening," he said.

So, what is happening at the bakery? Over 50 varieties of French pastry including croissants (chocolate, almond, cinnamon, ham and cheese, you name it), almond pound cake, palmiers, apple turnovers, quiches, macarons, various tarts, and, the piece de resistance, the kouign-Amann.

The kouign-amann melts in your mouth with its flaky texture and buttery, caramelized flavor. Out of all the pastries, it's always the first to sell out.

Other pastries, especially the colorful desserts in the cold case, rely on seasonal ingredients and flavors. In the summer, Left Bank Pastry uses berries from Spooner Farms in Olympia. After the summer fruit season, they move on to caramel, nut, and chocolate-flavored pastries for fall and winter. No matter the season, they are always developing new flavor combinations — like a green tea flavored opera cake or a cherry pistachio kouign-amann — all while staying in the French pastry canon. This constant invention of new flavors is one reason Potter recently halted the wholesale side of his business.

Before COVID, Left Bank made deliveries to multiple vendors and coffee shops throughout Seattle, Olympia and Tacoma. Now, if you want a Left Bank kouign-amann, you have to go to the shop in Olympia.

"Basically, every single day we're introducing new flavors," said Potter. "They can't keep up at retail [...] At any given time, there's going to be something in the morning that's not on the menu that we just made up in the middle of the night."

While Potter is sorry to let his wholesale clientele go, he's excited to focus on his community in Olympia and serve up even better pastry to those waiting in line. Each day, Potter gets to the bakery at 2 a.m., but the baking process doesn't happen until an hour before they open, he explains, and for good reason.

"Our bake is done at 6:45 in the morning, and we open at 7 a.m.," he said. "You are not going to get fresher pastry anywhere because we are just baking for our local clientele."

Good pastry takes time, Potter said, and most doughs require multiple days before they go into the oven.

"We're making dough today that we're going to put butter in tomorrow, shape tomorrow night, and then bake the next day," he said.

Potter hasn't always been in preparing pastry in the early hours of the morning. After graduating with a psychology degree from Western Washington University, Potter accepted a job at the Washington State Penitentiary, where he taught inmates on death row and in solitary confinement.

"It's a crazy job," he said, "I started baking as therapy; you got to have a hobby that takes your mind off of it."

Years into his job at the prison, Potter decided he wanted to learn a trade. Inspired by a friend who was a baker and his grandfather, who always whipped up baked goods for his family, he set his sights on learning how to bake. In 2006, he packed his bags and moved with his wife and daughter to Paris to attend Le Cordon Bleu.

When he wasn't in classes, he walked all over Paris, taking in every patisserie within the city.

"We were kind of broke, so what we did for entertainment was just walked around Paris most of the time with my [two-year-old] daughter on my back," he said. "She had the best view."

Following his culinary training and his life in Paris, Potter and his family moved to Olympia.

"I choose Olympia because, honestly, at the time, there was a lot of political stuff going on here, kind of like what's going on in Olympia right now, and I thought 'Well that's probably a good place to raise my kids,'" said Potter.

Though it's been years since his time at Le Cordon Bleu, Potter is still continually learning and seeking out additional training to then pass on to his team of bakers. Just earlier this year, he went to Chicago for a chocolate tempering and decoration training. He does not settle; he is constantly trying to improve his tried and true recipes.

"If people are praising us too much, then I think, 'Oh, let's really hunker down now. Let's look at our bestseller, the kouign-amann, and see if we can do that better," Potter said.

Already, 2020 has brought substantial changes to the formerly wholesale-based shop, and Potter says there is still more work to be done. Soon, Left Bank will be selling espresso drinks made with coffee from Blue Beard Coffee in Tacoma. More so, to speed up the long lines, he wants to implement mobile ordering and a separate ordering and pick-up window.

Over the next few years, Potter wants to continue cultivating an authentic French patisserie atmosphere for the customers. The bakery initially stopped letting guests inside the shop due to COVID, but now Potter plans to keep it that way. He wants to create an outdoor seating area that's not only social-distancing compliant but also transports his guests to the patisseries of Paris that inspired him.

For now, you can count on Potter and the rest of the bakery to play on the French classics, but don't you dare go into the bakery asking for a chocolate-chip cookie.

While some of the products, services and/or accommodations in this post were provided without charge, all of the opinions within are those of the author and the Seattle Refined editorial board.