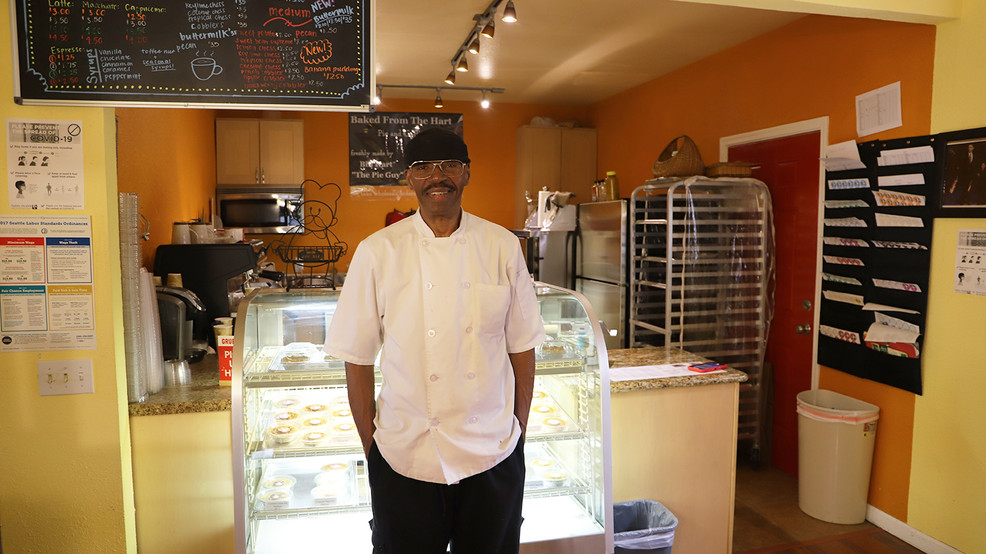 Baked From the Hart: Decades of tasty treats in Seattle

Seattle has undergone considerable change over the years. Neighborhoods have transformed, thousands of people have moved here from all over the world and many businesses have come and gone. But one thing that has remained consistent is Bill Hart, who has been baking his tasty tarts for decades.

Hart comes from Southern roots that inform his baking, but the business owner grew up here in Seattle, where he was a sharp young man who developed acumen at a young age. Like other children during that time, he began selling mints on behalf of a local company, making $0.25 for every dollar sold. Soon, his father told Hart he could make even more money if he sold the candy directly, as long as he kept a quarter aside each time to purchase more mints.

"And I never spent that 25 cents," he said, using that money to replenish his supply. "It was Business 101. I never steered away from that."

After his first taste of a delicious red bean pie from a family friend, he wanted to recreate one of his own. His sister gave him a recipe, and his fate was sealed.

"It came out perfectly," he said of his first attempt at a pie. It is not meant as a boast, merely as fact. His relatives were impressed. They told him he should sell them. Hart first began selling bean pies to benefit the local mosque and never stopped. Eventually, a culinary and business school education would supplement the skills and wisdom he'd gotten in youth. He opened Baked From the Hart in 1971, adding additional sweet and savory options to the original bean pie that remains a shop staple today.

Hart fires up the oven bright and early to have his Rainier Valley shop open to customers by 9 a.m. Walking up to the location, visitors notice immediately that it is a converted house. During slow traffic, he can be found at a table near the window studying Arabic, a practice that he returns to every day and a testament to his diligence. Smooth jazz music, potted plants and family pictures gracing the walls add to the homey feel.

With such busy days, he rarely has time to focus on the incredible reality that his pie shop has been around for nearly half a century.

"It's hard for me to actually comprehend that it's been 50 years," he said. "Time has moved on."

He has certainly noticed Seattle's transformation, but his appreciation for the city has not waned. What he appreciates most is the vibrant makeup of the city's population, with people of all cultures in one beautiful place.

"I've been here all my life. I appreciate that Seattle is made up of diverse people; across the board," he said.

After such a long time in operation, it is only natural that he has thought of one day passing the torch. For now, Bill Hart isn't going anywhere but hopes to one day hand the business over to his eldest son. He's confident that South Seattle will be in good hands. It looks like the man people nicknamed "The Pie Guy" has things all figured out.

Baked From The Hart is located at 2801 S Hanford St, and orders can be placed online or in person.