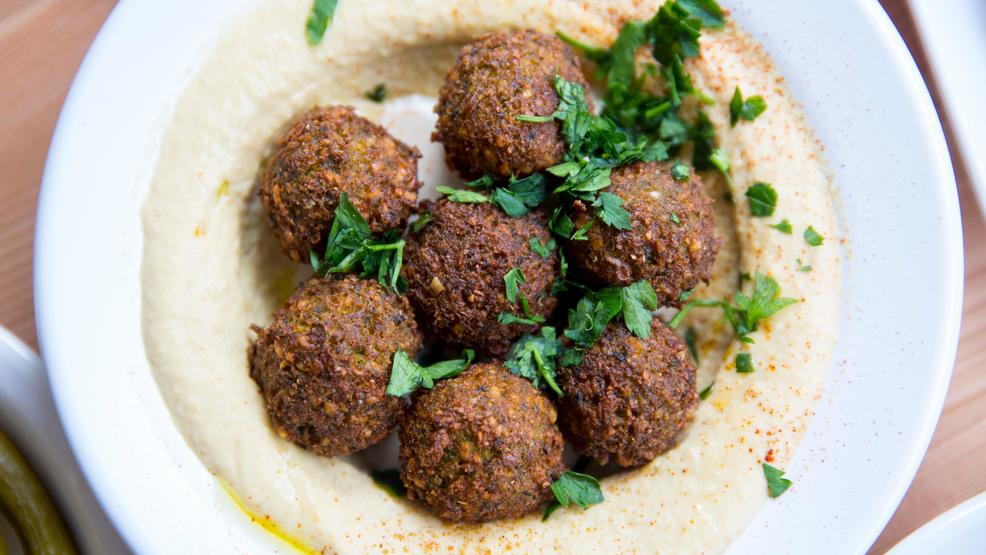 Falafel - herbaceous and spiced fried to order chickpea fritters. Aviv Hummus Bar is a 100% Israeli hummus bar, straight from the streets of Tel Aviv. And now, it's on Capitol Hill! Fun fact: Hummus literally means chickpeas. And while the west has kind of appropriated hummus and made it its own thing, traditional hummus isn’t a sauce, or a dip, it’s supposed to be a eaten as a meal consisting of smashed chickpeas, “tahina” and lemon. Enter Aviv Hummus Bar - trying to educate through this food. The Hummus Bar is located on 107 15th Ave E, Seattle. (Image: Sy Bean / Seattle Refined)
SEE MORE

Forget everything you know about hummus. At Aviv Hummus Bar in the heart of Capitol Hill hoards of hungry people are discovering what folks in Israel have know for generations, hummus isn't a dip or a side, it's the main attraction.

"In Israel it's light and smooth and velvety and almost creamy, even though there's no dairy in it. You can just mow it down and eat it as a meal," said David Nussbaum, owner of Aviv.

Nussbaum has worked in restaurants most of his life. He grew up traveling to Israel with his parents, who emigrated from Israel to the United States in the 70s. So, when he decided to open his own spot, hummus was the natural choice.

"I just kind of got sick of waiting for someone else to do it, and I said, 'I'm going to do it'," he explained. "A hummus bar in Seattle would hit it out of the park because they're on every block in Israel and that's what they're eating breakfast, lunch and dinner."

To create that true Israeli-style flavor, Nussbaum spent a summer working at a restaurant in the coastal city of Haifa. He learned tips and tricks but they wouldn't show him how to make their hummus.

"It's relatively simple ingredients," he said. "It's chickpeas, tahini and lemon. How hard is it to get it like it is in Israel? Very difficult it turns out. I mean I was making hummus for years until one day, you know, you're adding a little bit more of this, a little bit less of that, and you taste it and you go 'that's Israel'."

Naturally, his hummus recipe is top secret. The same goes for his falafel. But, people are eating it up.

"I think the reason it's so popular is because it's so simple. We have a few items on the menu and we do them very well," Nussbaum explained. "Everything here goes together. So you get the hummus and you can get a salad on the side, and all these sauces and you can throw everything on your bowl and it's going to be awesome."

The menu at Aviv is concise and most items are vegan or vegetarian. Regardless of what you order, it's an eye-opening meal, one that just might have you seeing hummus in a whole new light.

"The way we're presenting it, like they do in Israel, it's so beautiful, it's so delicious," he said. "It's hip, it's trendy, it's sexy - so everyone is coming together and it's this hodgepodge mix of people all enjoying one dish. That's what it's all about to me."