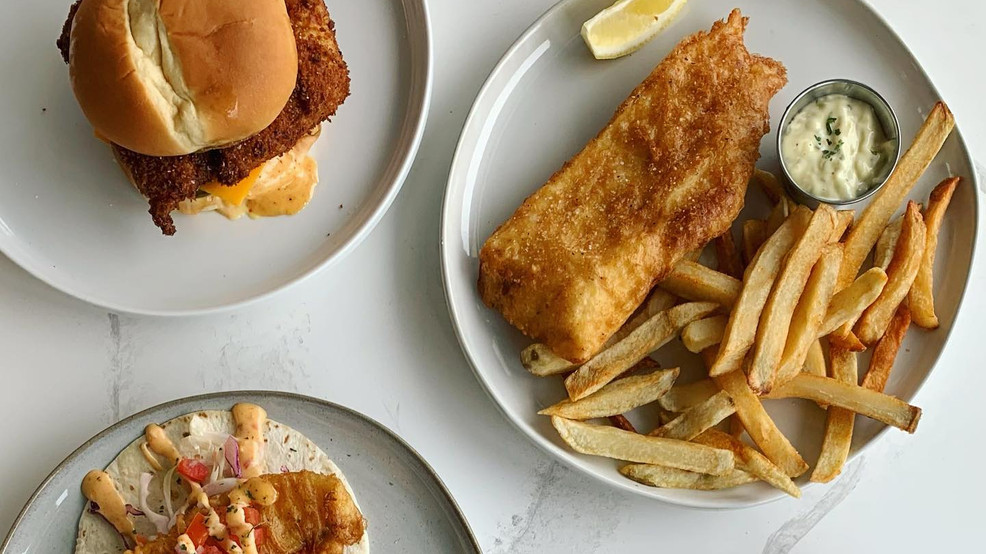 Three images hang on the wall of Salty Blue Fish + Chips in Renton. One is of Bondi Beach in Sydney Harbor, another shows St. Kilda Beach in Melbourne and the last depicts the surfer’s paradise of the Gold Coast in Brisbane. Aside from all being gorgeous beaches in Australia, the three all have the common thread of reminding Salty Blue owner Xenos Nair of time spent with family.

Born and raised in Fiji, some of Nair’s extended family lived in Australia. He visited them often, always sharing the absolute best meal to have at the beach: fish and chips. But the Aussie way of making fish and chips is different from what we’re used to here in the Pacific Northwest, and Salty Blue is out to show us how it’s done down under.

“I wanted to bring a little bit of that flavor profile back here,” Nair said. “These are all things that I grew up eating and that I’ve been craving and couldn’t find here.”

For starters, the fish at Salty Blue is New Zealand hoki, a fish Nair says is light and flakey and quintessential Aussie-style. This gets dipped into a light batter and fried until perfectly crispy. When it’s available, Nair also brings in barramundi, another special on Australian menus.

But not everyone loves fried and battered fish, so Salty Blue offers all fish grilled as well. Fried or grilled, the fish options come with your choice of hand-cut thick fries, sweet potato fries or salad. Nair’s a fan of the grilled fish on salad option for those seeking out a lighter meal.

A delight for Seattle-area Aussies, Salty Blue also has chicken salt on offer. A secret seasoning mix famous in Australia, Nair said he has many asking for an extra few shakes on their fries and fish. The Salty Blue version is a combination of eight different spices.

“It’s a painful process to get it going, but it’s definitely worth it,” he said.

Salty Blue’s menu extends beyond Aussie-style fish and chips to include an incredible chicken schnitzel burger, another common menu item thanks to Australia’s German and Austrian influences. Calamari makes its way onto the menu, too, as do fish tacos with fantastic house slaw. The potato cakes, breaded and fried in the same manner as the fish, are another Australian specialty that immediately becomes a new snack obsession.

To feed a crew, Nair introduced two sharing baskets to the menu, which also reminds him of spending time at the beach with his family.

“Every time we went out for fish and chips in Australia, that’s what we got - a sharing basket with a whole bunch of different fish items. We sat at the table and just ate whatever we wanted.”

Nair opened Salty Blue Fish + Chips in March of this year. Not the easiest time to be opening a new restaurant, but Nair’s found excellent support from the Renton community.

“The people around here are amazing,” Nair said. “I haven’t advertised; It’s just word-of-mouth spreading. It’s amazing to feel the love that I’m getting from the community.”

The love is mutual at Salty Blue, where we’ll always be instantly transported to a warm, picturesque beach in Australia. A feel-good meal during the darker months in Seattle? We think so.

Salty Blue is located at 601 S 3rd St Suite D in Renton and is open from 11:30 a.m. until 8 p.m. Tuesday through Sunday. Order online through their website for pickup or drop-in with no reservation necessary.