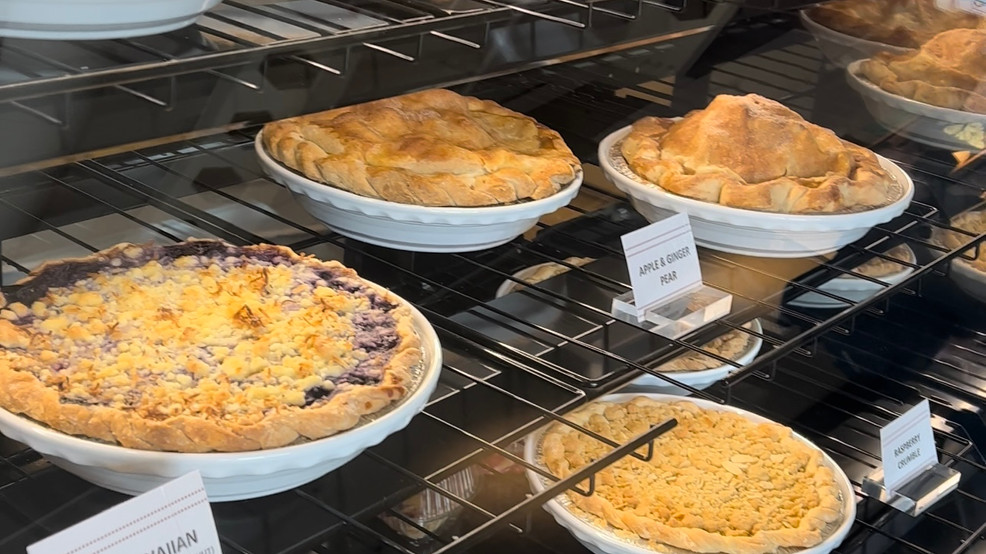 A La Mode Pies is baking 3,200 pies in 48-hours this Thanksgiving

At A la Mode Pies, Thanksgiving is a bit of a blur, but owner Chris Porter wouldn't have it any other way.

"This year, we're going to make 3,200 pies. That's 3,200 pies that we're producing in a 48-hour period," said Porter. "But it's kind of why you open a pie shop. I mean, you open a pie shop to be around during Thanksgiving. A lot of times, Thanksgiving is the only time people come buy a pie, so it's the one time you have interaction with a large number of people. It's electric in here."

Porter first fell in love with making pies when he was just five years old, helping his mom and grandma in the kitchen. While baking always remained a hobby, he didn't expect to pursue his passion professionally. Instead, Porter found success first as a television news reporter, then a public relations director.

"I never thought, 'Oh, I'll be a baker when I grow up,' but your life takes all these different twists and turns. At some point, you sit back, and you say, 'What is really going to make me happy?' And what really made me happy in the end was just making pies every day. So, I turned my dream into a reality," said Porter.

Now, more than a decade later, there are three A la Mode locations around the city, including the newest in Ballard and Porter's pies — handmade every morning — are beloved by folks all over the region.

"I think it speaks to the quality of the product in many ways," he said. "We go into each day looking at all the products we're making and deciding if it's worthy of being on the shelf. It's that kind of care that, I think, has made us successful."

Of course, every great pie starts with a great crust, something Porter and his team take serious pride in.

"What you want to look for is you want your dough to be marbled with butter," explained Porter as he rolled dough in the kitchen of his Ballard café. "What happens is when it goes into the oven, the butter melts into the pie. It leaves a pocket behind where it once was, and that's the flake. That's why it falls apart in your mouth."

During Thanksgiving, A la Mode offers a Holiday Pumpkin Pie made with a gingersnap crust and spiced pumpkin custard, but Porter's favorite fall pie is one he lovingly refers to as the "Mount Rainier of Pies" — the Apple & Ginger Pear. It's loaded with a medley of apples, bartlett pears, freshly grated ginger and plenty of warm spices like cinnamon. The Apple & Ginger Pear also happens to be legitimately massive, giving it the added appeal of being a perfect centerpiece for a Thanksgiving table (see it for yourself in the video above).

"I really want A la Mode pies to be as close to grandma's pies as possible," Porter said. "I mean, I truly want it to be the best pie you've ever had. Period."

To place an order for the holidays, make sure to fill out the form online as soon as you can — there are only a limited number of pies being made this year, and they'll go quick!