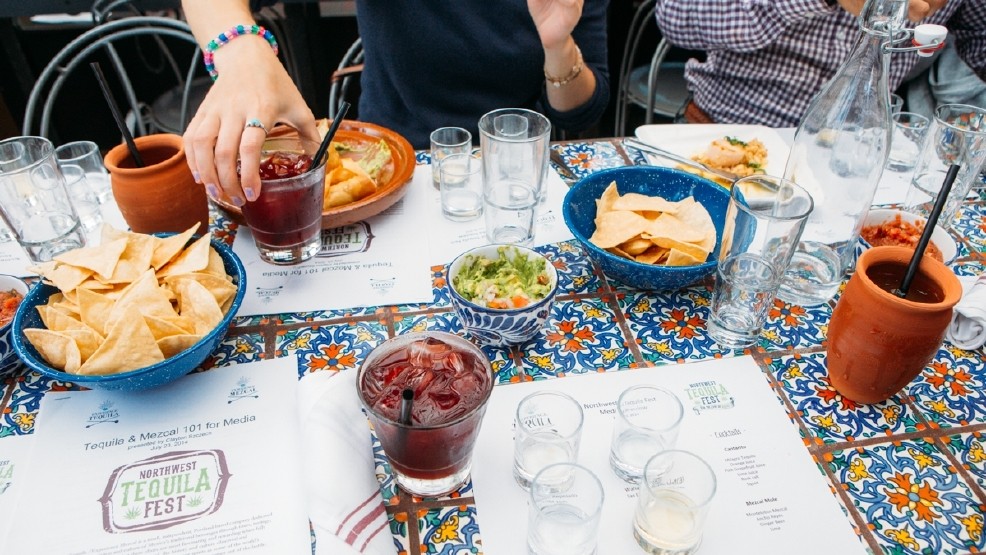 If the mention of tequila still makes you moan and groan and curse Jose Cuervo while shuddering at memories of the inside of your toilet, Northwest Tequila Fest, on August 9th, is ready to show you the more mature side of agave spirits with over 130 different kinds to try. (Image: Joshua Lewis / Seattle Refined)
SEE MORE

If the mention of tequila still makes you moan and groan and curse Jose Cuervo while shuddering at memories of the inside of your toilet, Northwest Tequila Fest is ready to show you the more mature side of agave spirits.

On Saturday, August 9th, the festival is bringing more than 130 different tequilas and mezcals together, some of the best bartenders in Seattle (and beyond) competing to make a cocktail that earns them a trip to Mexico, and food (to soak up all that booze) from Poquitos, Agave, and Calle restaurants. And that warm and fuzzy feeling you'll get from attending isn't just a good buzz: the Tequila Fest benefits the Benevolent Guild of Seattle, a non-profit group committed to assisting children's charities and support groups in the Puget Sound area.

For those with little experience drinking great agave spirits (which includes both tequila and the broader category of mezcal), it's an opportunity to taste and compare a range of brands and styles, from the un-aged blanco up to the extra-añejos, aged many years. If you find one that you like, purchase it, tax-free, at the on-site retail store. For those of us living in Washington under I-1183, that's over 25% discounted from store prices.

So what does a rookie to the world of good tequila need to know before leaving behind the world of salt, lime, and slamming a shot, for the high-quality sip? After listening to tequila expert Clayton Szczech of Experience Tequila preview his Tequila 101 class (also offered August 5th, through the Tequila Fest) and drop some additional agave knowledge, here is a taste of important tequila information:

Tequila is complex. Scientifically, that is. Un-aged tequila has over 600 different aromas, making it the most complex white spirit. Why? Essentially the agave is aged while growing: the plant is always at least six years old before picking. There are versions that are further aged after distilling (reposados and añejos), but agave spirits take a head start in complexity by using fully mature plants.

Tequila has terroir. As with wine, the soil, weather, and climate of the agave growing region cause great variation from spirit to spirit. All tequilas come from the state of Jalisco and other certified nearby regions, but elevation, distance from the ocean, and microclimates all make for variation in the flavor even before the agave heads for the still. Mezcal, which hails from a far larger region, has even greater variations in terroir.

Take your time tasting tequila. Shots are for things you don't really want to taste, sipping is for that which you do, but truly tasting is a whole new level. To analyze tequila properly, you'll want to roll it about in your glass (preferably one with enough room for the tequila to move). You should see the viscosity as you're letting at least a few of those 600 aromas out into the air. Now it's ready for a sniffget up close and breathe deeply, like a dog making a new friend. Once you have the aromas, finally go ahead and take a taste. Szczech quotes Dave Yan, of Casa Noble Tequila: "Trust your mouth."

You can trust tequila. If it says tequila on the bottle, and it's 100% agave, then it's likely pretty good stuffand that lack of additives will make you less likely to curse its name on August 10th. Tequila is the most highly regulated spirit category, so there's no moonshine or fraudulent versions on the shelf. Aside from the geographic limitations outlined above (it's like Champagne, in that it can't be tequila if it's made elsewhere), it must be made only with a specific type of agave, informally known as blue agave, and must pass a litany of other requirements of the Tequila Regulatory Councilthat's what the letters NOM and number on the bottle mean.

There's an agave spirit out there for you. Don't let the mass-market dominating brands convince you tequila isn't for youthat would be like taking a swing of Boone's Farm and dismissing all wines. Not loving the rough-around-the-edges blancos? The multi-year aged extra-añejos will have more in common with the bourbon that previously aged in the same barrel than with a white or silver tequila. Mezcal (literally meaning "cooked agave") is another direction, opening a world of additional types of agave used to make it, regions it can be from, numbers of distillations, and styles used to distill ittequila is a mezcal, but it's just part of the larger category: there's so much more to explore!