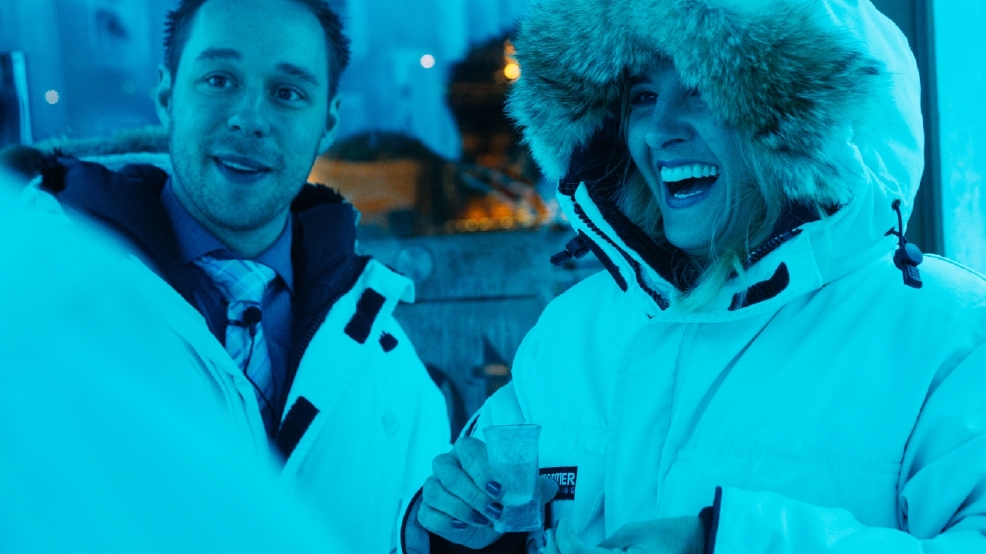 What has a Vodka Ice Room, Champagne Sabering & a $60k bottle of Cognac?

It's all in one place folks, and that place is Bearfoot Bistro in Whistler.

As you may have seen earlier this week, we are in Whistler right now (November 2016) covering Cornucopia - the region's food and wine festival. We were interested to see the area for something they are a little less known for.....but we're slowing finding out that not everything in Whistler is what meets the eye.

For example, walking into Bearfoot Bistro feels like walking into any other wonderful classy restaurant. But almost immediately inside, you can't help but be drawn to one thing in the corner.

A vibrating, bright blue thing. That would be the Ketel One Vodka Ice Room, the coldest vodka tasting room in the world.

In the world, people.

Obviously, we had to try it out. Vodka Expert Scott Barber has been in the Ice Room for up to 8 hours at a time; it's high job to take folks on a vodka tasting tour around the world.

"We start off with a Ketel One shot once we're in, obviously," he said. "And then you can either pick three other tastings, or I can recommend them to you."

We donned the large Canada Goose, Artic-ready parkas they have on hand (a cool $2K each, give or take), and follow Scott inside. The cold hits us immediately. It is, after all, -32C (-25F).

"Being in a cold temperature like this takes away a bit of the burn that vodka usually has," said Barber. Maybe it was the cold numbing my mouth, but I did seem to feel less of that usual kick when we tried the Ketel One shot. The room is filled with vodkas - more than 50 of them embedded in the ice walls - and they range from rye, wheat and hemp seed distillations.

I don't think we made it more than 10 minutes in there (and I was the genius who wore flats), but not before we snapped a pic!

We thought the fun would be done at the Ice Room, but while I was sticking my frostbitten toes in the fire - someone mentioned sabering and we took off like lightening. A magical man named Luc Trottier led us to the Bearfoot's underground wine cellar where they keep over 20,000 bottles of the world's best vintages, (and one $60,000 bottle of cognac, no joke) and there - lying innocently next to a bottle - was a saber.

Bearfoot invites guests who buy a bottle of champagne (minimum $75) down to the cellar to saber it. In this case, Luc taught our colleague Carey the Napoleonic tradition - and literally on the first try she was able to cleanly saber the top off of the champagne bottle.

"In the old days, this would mean good luck in the battle to come," said Luke.

We didn't battle anything but a ton of food at the House Party: Best of B.C. showcase that night, but Carey got to take home her cork in a custom presentation box.

So if you're in Whistler and head into Bearfoot Bistro - beware. You're getting a lot more than just a bistro.