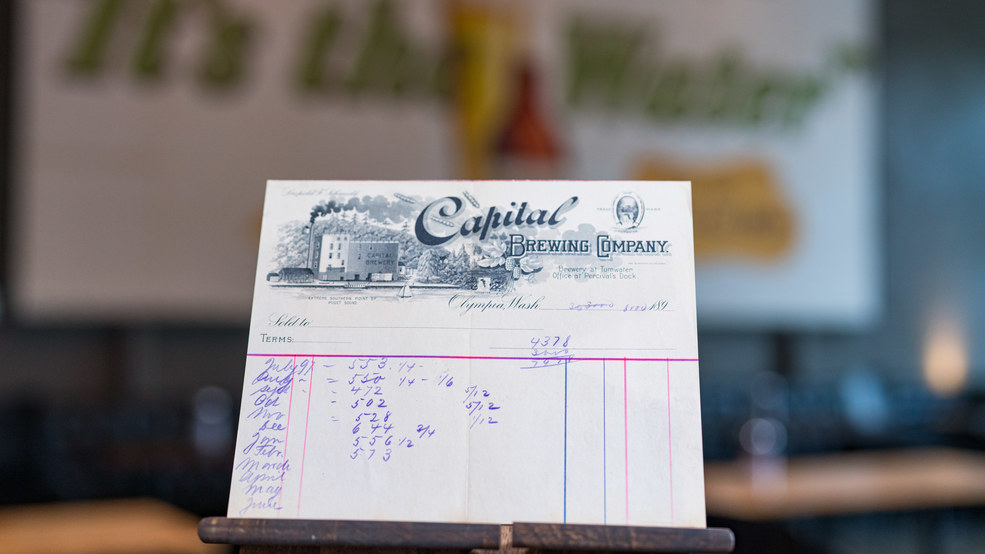 We've got Yakima on the east side, which just happens to be one of the heaviest hops producers in the United States - and then we've got the artesian well sitting underneath Olympia. Olympia Brewing was right - it really is in the water! Washington's capitol is known for its iconic breweries and robust beer history, but new breweries opening in Oly are serving up modern style brews while also paying homage to the history of beer in Thurston County.

I was recently visiting Olympia for a brief but bangin' staycation and made sure to dig out time for a beer and bite at the recently opened Well 80 Brewhouse. The brewhouse sits on top of the artesian well (so you know that beer is good) but I was suggested to try a new brew they just released called "Leopold's #1 Lager," that has a story that is worth blasting across the INTERNET, okay?!

So here I am, enjoying my pub and grub at Well 80 (side note, I unfortunately couldn't try the Leopold Lager because I have a gluten allergy, cue the boo's from the crowd) and I got to chatting with the Brewmaster at Well 80, Paul, and Dan, one of the managers who told me this super epic story about how this old-made-new-again lager came to fruition.

The story goes as follows, according to Dan.

Leopold Schmidt (the OG brewmaster and founder of Capitol Brewing in 1896, which eventually turned into Olympia Brewing) was concocting beer recipes and had written down the instructions of some of the very first beers ever brewed by Capitol Brewing in a little notebook.

Years and years and YEARS had passed before the little recipe notebook was discovered in a closet (in which closet? - that detail is lost somewhere along the word-of-mouth trail). The book was kind of an enigmatic ingredient list, as Leopold was an emigrant from Deutschland and the recipes were written in German.

After finding a translator, it was confirmed that this little book of secrets, was indeed, one of the first lager recipes that Schmidt had brewed back in the late 1800s. So - it was time time to recreate the literal OG beer of this iconic and historical brewery that has been in the Olympia region for over 100 years.

Obviously, recreating the lager wasn't a perfect science, as some of the translations came out a little vague and unspecific, like "flour from Portland," which could represent a multitude of products. However at the heart, the taste is still there with its "heavy flavor and strong aroma."

Even though Olympia Brewing permanently closed their doors in 2004, Well 80 kept the dream alive by creating 20 barrels of the brew, which is about 40 kegs, which translates to...it's a limited supply ya'll. Please do yourself a favor and visit this awesome brewery and try some of this iconic, dare I say, HISTORICAL beverage. Moreover, the food is outstanding and they have a super cute outdoor eating area.

Be sure to check out the video below where some of the brewmasters talk about how and why the brew was created!