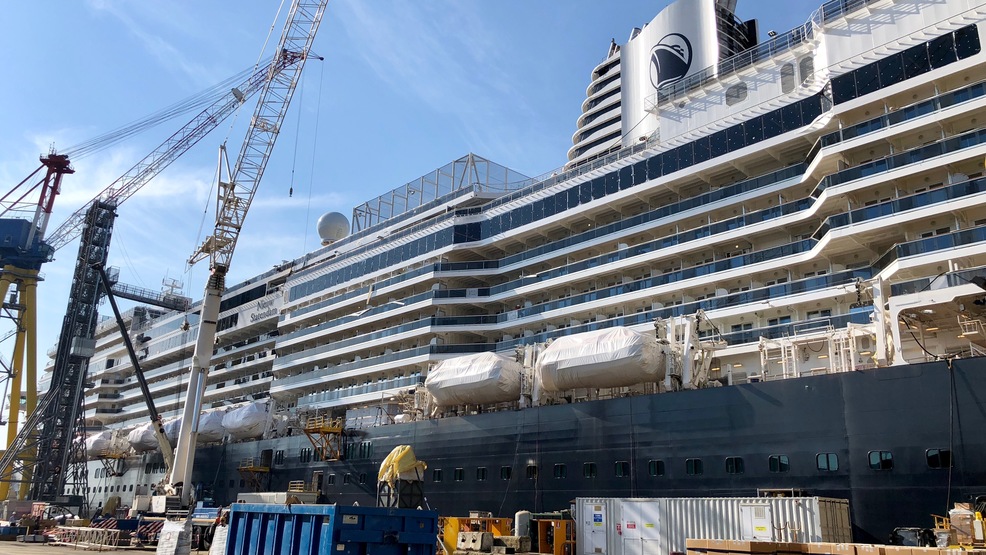 Holland America's new ship is called the Nieuw Statendam, and I had the opportunity to hop onboard at Fincantiere - a shipyard outside Venice, Italy that has built many new-builds for the company.

The process is truly remarkable: huge sheets of steel are precisely cut, to the T, and then put on huge machines where the pieces are then welded together.

Fun fact? In the early process the ship is built together upside down using these massive magnets since it's easier to weld that way. Piece by piece is put together, and then - you've got a ship!

The Nieuw Statendam weighs about 100,000 tons and has incredible amenities. First up? The World Stage.

The spectacular main show room is surrounded by 270 degrees of flat screens that puts you in the middle of the action. The pool deck is nothing short of amazing. Two decks that will be home to bars, a pizza place, a hamburger stand, pools and hot tubs - all under a retractable roof. It's going to be a tranquil place.

Famed designer Adam Tihany brings a bright interior to the two story dining room, and is inspired by a modern, global design and sets the stage for an exceptional meal. The centerpiece is a curved copper sheath surrounding a two-story wine tower.

The Lido isn't your usual buffet. It's a marketplace that comes to life with different stations of foods from around the world. Woodinville's Chateau Ste. Michelle has a footprint onboard where you can blend you own bottle of wine. Think of it as a mini-winery...complete with sommeliers from right here in western Washington.

The Grand Dutch Cafe pays homage to the rich Dutch roots of Holland America's line. This is the spot to grab a brew or enjoy a cozy cup of coffee. It's be complete with snacks native to the Netherlands.

It won't be hard to relax onboard the Nieuw Statendam. There will be a thermal suite, complete with hot stone lounge chairs and a massive hot tub under twinkling lights. And a new feature that's never been onboard any Holland America ship: The Rolling Stone Rock Room. It's a partnership with Rolling Stone Magazine that features a live band playing our favorite rock-n-roll classics.

Holland America is also teaming up with Ethan Stowell, who joined the cruise line's culinary council. So you'll see some Pacific Northwest cuisine, all inspired by Stowell and the rest of his team.

The Nieuw Statendam takes her first voyage in less than three weeks, sailing from Rome to Ft. Lauderdale on a 14-night premiere voyage.

And there's so much more to see - I have videos on my Insta Story. Follow me @sethwayne!