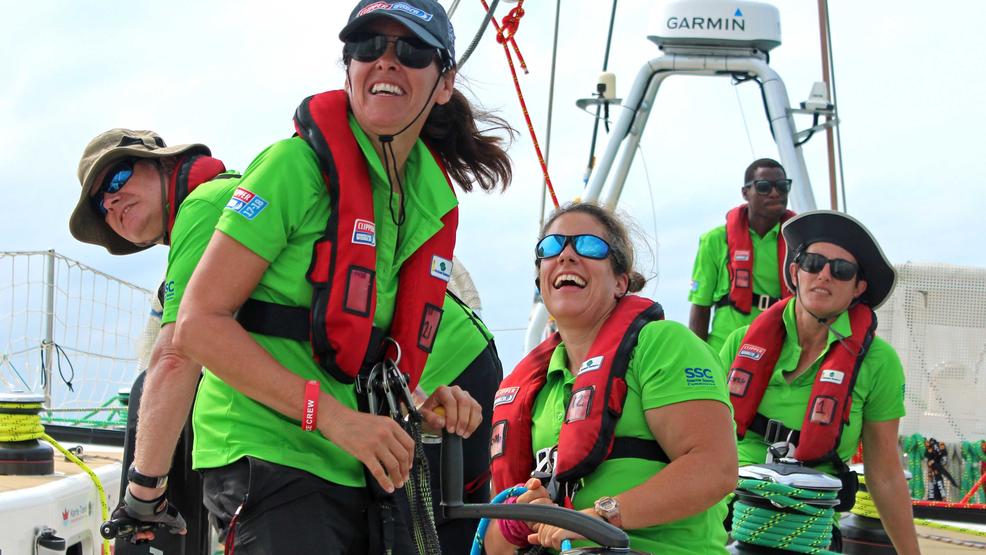 Shannon Dean (standing) with her crew during Race 8.
SEE MORE

What has eight legs, six ocean crossings, and takes more than 700 people to perform?

No, it's not a giant tarantula, nor is it the start of a bad joke. It's the Clipper Round the World Yacht Race-known as one of the biggest challenges of the natural world and an endurance test like no other.

This is the second year the 11 teams in the Clipper Race will be hosted by Visit Seattle-who has a team in the race. It's a natural fit, as Seattle's maritime history and adventurous spirit go hand-in-hand with the Clipper Race.

With participants and sponsors from all around the world (41 nationalities are represented this year), 15 crew members on the Visit Seattle team are from Washington state - and six are from the city of Seattle itself.

One of the Seattle natives competing on the Visit Seattle team is 53-year-old Shannon Dean, a nurse who has lived in the Emerald City for over 25 years. Her father was a ship's carpenter, and she has been testing her sea legs since she was a baby. At the start of the Clipper 2015-16 Race, Dean was working a night shift at the hospital. She watched the race online and knew what she had to do. Her application to compete in next year's Clipper Race was in the mail the very next day.

But don't worry - Dean isn't the only amateur sailor taking on the toughest endurance challenge on the planet. 40 percent of the 712-person crew are novices and have never sailed before starting a comprehensive training program. To prepare novices for the 11-month journey, each participant completes a rigorous training course and is "suited and booted" in the latest extreme protection gear to tackle the challenge ahead.

While all participants have the option to compete in only one leg of the race, Dean is on board for full circumnavigation-meaning she's sailing the entire race. Joining her for the whole journey is Visit Seattle's skipper, Nicola "Nikki" Henderson from Guildford in England. At age 24, Henderson is the Clipper Race's youngest ever skipper but proves to be more than qualified for the challenge.

Henderson has been sailing with family and friends since she was 13, and she has carved a successful career at sea with a short stint in the Sea Cadets and as a competitive racer and instructor-rivaling people twice her age.

"I know how fun competitive racing can be," Henderson says. "Being part of a team that is driving for the podium is very motivating, but for me, winning is more than the podium finishes. My ambition is to keep my team safe, look after our boat, and sail with poise and style all the way around the world."

The Clipper Race teams are expected to arrive in Seattle between April 19-21 to finish race nine of 13, docking in Bell Harbor Marina. Be there to "greet the fleet" as each team completes the crossing of the Pacific Ocean, a distance of more than 5,530 nautical miles with some of the most extreme conditions on the planet.

On April 22 and 24-27, you will be able to tour the ships and meet the crew members, who will also be giving public talks. And don't forget to stop by on April 29 to watch the race departure from Bell Harbor Marina as the teams start the US Coast-to-Coast leg.

If waving the crew off has you wanting to make waves in next year's challenge, learn how you can apply to be a competitor in the 2019-20 race by going to clipperroundtheworld.com/apply.

Clipper Round the World Yacht Race events will be taking place at Bell Harbor Marina in Seattle from April 19-29. Learn more at clipperroundtheworld.com.