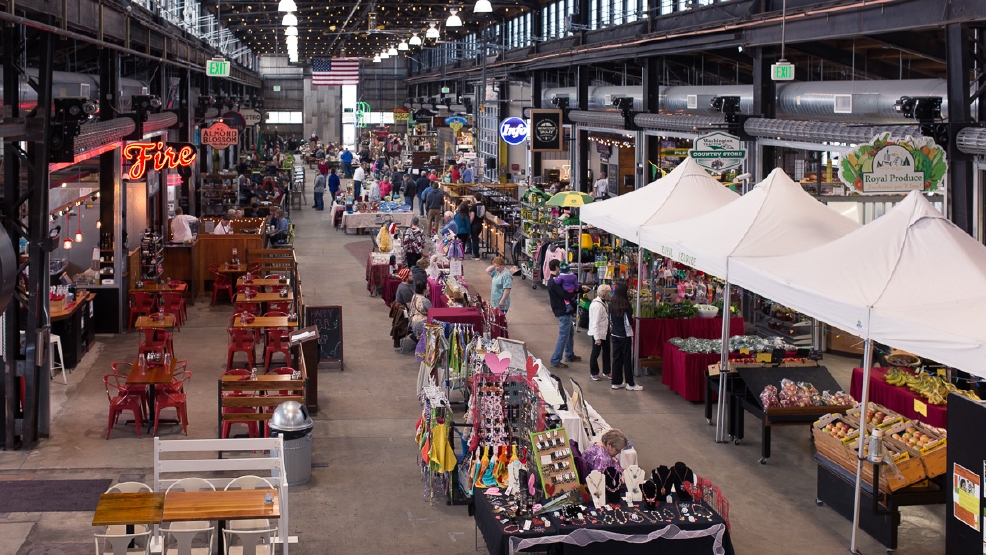 The Secrets of Wenatchee's Pybus Market

In fact, Pybus Market is itself if one great and glorious secret, though one which is becoming increasingly well-known here in Seattle. Opened in Wenatchee in 2013, the market modestly calls itself the 'world's best farmers' market' and although Pike Place Market might have something to say about that, Pybus may well have a point. The building is breathtaking, the local farmers, restaurants and artisanal food producers it hosts are uniformly superb, and its location on the banks of the Columbia River is stunning.

It's definitely worth stopping there next time you head to Chelan, Leavenworth, Wenatchee or Mission Ridge and quite honestly it's fabulous enough to be a destination in its own right. I was lucky enough to be given a tour by Steve Robinson, the market's executive director, who gave me the lowdown on this historical, architectural, community and food lover's treasure.

The red neon sign is reminiscent of Pike Place Market, but as soon as you see the building, with the Columbia River and Cascades behind, it's clear you're not in Seattle any more. As I entered I was struck by the tall ceiling and the light streaming in through the high windows. The building is magnificent - spacious, airy and welcoming - with just the right amount of bustle and action.

The 25,000 square foot building was originally constructed in the 1940s as a warehouse for Englishman E.T 'Tom' Pybus' steel company. Pybus was one of Wenatchee's early pioneers, arriving in 1911 and building his blacksmithing business into one of the area's premier steel companies. Dennis Barnes, now one of Pybus Market's 'ambassadors', worked there under the Pybus family and shares his memories with visitors.

In 2010, the now derelict building was bought by the Port of Chelan, as part of its program to redevelop the riverfront area. In 2012, local philanthropists Mike and JoAnn Walker, the port and the federal government came together to provide around $5 million to develop the building as a market and create an event space with access and views out to the riverside park, the Apple Loop bike path and the Columbia River.

The initial inspiration for the redevelopment came from San Francisco's Ferry Building and Seattle's own Pike Place Market. After a sensitive restoration by Graham Baba Architects (also responsible for some of Seattle's most beautiful restaurants), which preserved the gritty look and feel of the building's industrial past and created inviting spaces for all the market's various activities, Pybus opened for business in May 2013.

The glory of Pybus isn't just in its building, it comes from its 20 or so permanent tenants and vendors. While its grounds are the seasonal home for the Wenatchee Valley Farmers Market - open from May to October - the building hosts a mix of year-round tenants - a meat market, restaurants, artisans, a winery, a tea shop, fruit and produce shops and other vendors, as well as a community kitchen and community event space.

Every permanent vendor and restaurant has been carefully selected by Robinson and his team, with an emphasis on high quality and local production. Mike's Meat and Seafoodoffers the highest-quality beef, chicken, pork and seafood available in the Wenatchee Valley, including Painted Hills Natural Beef, and fresh seafood from the nearby Pacific. The Cheesemonger's Shop offers an extensive range of local and international cheeses, and often hosts events in conjunction with local family-owned and operated winery Jones of Washington, while D'Olivo carries a range of extra virgin olive oils, vinegars, flavored oils, salts and spices, with plenty of expert advice for the enquiring cook.

Although always intended primarily as a space for people to buy produce and artisanal foods, Robinson knew that bringing in the right mix of high-quality restaurants was key to the market's success as a visitor destination. The wood-burning oven at pizzeria Fire was shipped all the way from Italy and turns out delicious fresh pizzas in minutes, including imaginative seasonal variations that make the most of Wenatchee's fresh produce; while sister gelateria ICE prepares its Italian-style gelato daily. In summer both have outside patios that look out over the Columbia River. Pybus Bistro serves a French-style bistro menu and also has an outside patio, while we enjoyed the succulent carnitas and other Central and South American fare at South, an offshoot of the Leavenworth favorite. Wenatchee Valley Brewing Co. serves a range of superb craft beers, accompanied by juicy burgers and a mean mac n' cheese.

The vision for the market places it at the very heart of the Wenatchee community and it has been fully embraced by the locals. The event space and community kitchens are available for use by local organizations; local artists and musicians are invited to strut their stuff, and events are regularly hosted both by the vendors and the market itself. Visitors never quite know what to expect when they get to the market, which is part of its immense charm.

If you're looking for a special space for a private event, you could do worse than the market's event center, which in summer opens out onto a large terrace with close proximity to the beautiful Columbia River.