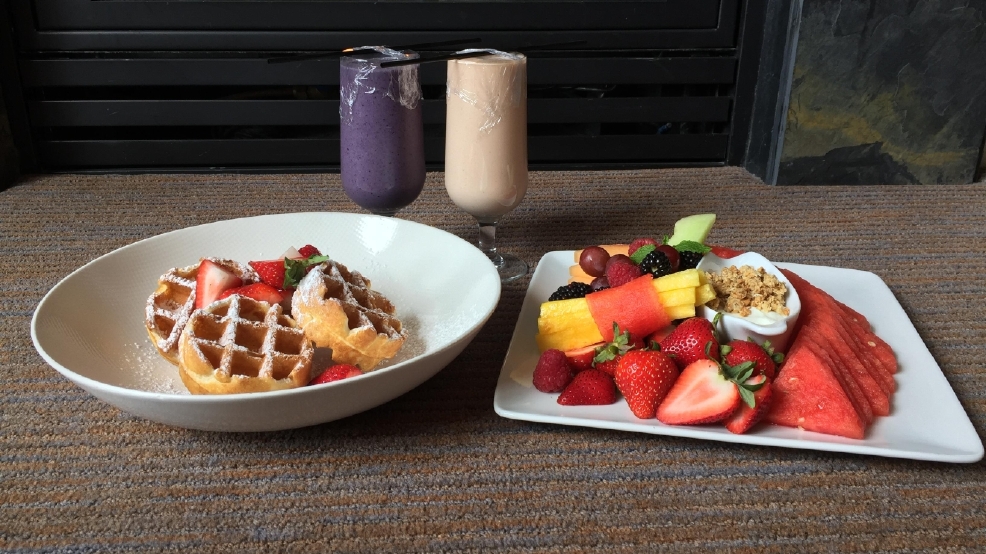 Take a vacation without the guilt

Does anyone else sometimes see vacation as a long cheat day? I usually look forward to skipping my workouts, and eating whatever looks best on the in-room dining menu.

This is kind of what I was expecting when I went up to Whistler a couple weeks ago with my sister. I had never been before (despite Seattle Refined covering it multiple times), and everything I'd read had me dying to check it out.

The drive up was a little brutal - but that's because it was a red-eye (can there be a red-eye drive)? We left Seattle at 11 p.m. and didn't get to the Whistler Westin Resort and Spa until 4 a.m. GAH!

We dropped into bed and were up a couple hours later for breakfast, and I was totally ready to begin the weekend of gorging and laziness. BUT. That's not how the Westin Whistler does things.

Next to my breakfast plate were two little shots of fresh-pressed juice. Not only were they adorable, but they made me think - ok, maybe I'll only have five waffles and not six this morning. The breakfast buffet was expansive, but not terribly unhealthy. The waffles and pancakes were all mini, which I think are intended to play a trick on the brain to eat less. It worked - and the eggs and potatoes were filling (that also might have been the twenty cups of coffee I drank).

All in all I didn't want to curl up and sleep after stuffing myself, and I have to admit - I was proud. I had handled that breakfast like a champ. This was still when I hadn't realized it was all part of the Westin's plan.

The next step was originally going to be downhill mountain biking (the activity that takes over Whistler Village in the non-snow seasons), but it was cancelled due to inclement weather. I gotta admit - as much as I was excited to try a new activity - I was also excited to NAP. Remember, I was operating on 4 hours sleep and on weekends I like to get 10+ (don't judge).

So we napped hard - and I just need to spend a couple moments here on the mattresses in the suite we were staying in. I am not a mattress connoisseur, and everyone who knows me will tell you I will literally sleep on anything. But these specific mattresses were HEAVEN, which makes sense since they are called Heavenly Beds. I don't know what kind of magical fairy dust they sprinkle on their beds in Canada but I want some. True story, this spurred me to buy a new bed and mattress back in Seattle - hopefully it will come somewhat close to that luxury I felt.

After we were finally feeling a little more like ourselves, we headed to the gym. Usually hotel gyms are a joke, maybe one elliptical sadly in a broom closet somewhere next to a water cooler. Not this one. You literally descend a staircase like a Disney princess to get to the fitness center, which is small enough to not be overwhelming (hello LA Fitness), but large enough to have everything you need.

After a workout and healthy breakfast - I was feeling AWESOME. And I still thought it was all me. But it was getting close to dinner time and I have to admit, I was hungry.

Crab cocktail paired with a Sumac Ridge Brut
Small, delicate crab leg serving, and the Brut was the perfect combo

Watermelon Salad paired with Tightrope Viognier
This was a vaccum-sealed slice of heaven with feta and balsamic, which I have tried and failed to reproduce at home

Red Snapper, Seafood Paella and Pork Tomahawk paired with See Ya Later Rank Pinot Noir
This was all served family-style, so we shared with the media group (eight people)

Not only was the food all extraordinary - but it was reasonably sized. I don't know why this stood out to me so much - maybe because in Seattle (and let's be honest, the U.S.), everything is so jumbo and oversized. Meals are HUGE and usually we eat them all. I'm used to eating meals out and immediately feeling ill or stuffed afterwards, and while it might have been great going down - it doesn't feel great afterwards.

After this meal, on the other hand, I felt outstanding. I had had a healthy day with exercise and food alike, but still felt pampered (hello bed), and fancy (this ain't no Costco frozen meal)!

When the next morning we had in-room dining of smoothies and mixed fruits, I was starting to get it. This was the Westin's thing, and sure enough when I asked our gracious host Mitchell Fawcett about it he explained the hotel chain's "commitment to healthy living". So committed in fact, that they have six pillars that they focus on (which you might have heard in ads, etc): Sleep Well, Eat Well, Move Well, Feel Well, Work Well and Play Well.

"Health and wellness have always been core principles of the Westin brand, and as a mountain resort we're especially well-positioned to deliver this," said General Manager Tony Cary-Barnard when I asked for more info on the general healthiness of Westin Whistler. "Our guests travel to Whistler to experience the exhilarating outdoors, to escape, and to recharge. Every aspect of their stay is designed with this in mind. Ultimately we want every guest to leave feeling better than when they first arrived."

And I have to admit, I'm sold. On the long drive back to Seattle after that weekend - the shame and guilt that I usually feel after a mini-vacation was nonexistent. Now I know that it wasn't just me having great willpower, but something subtle in air in Whistler. I highly encourage anyone looking for a non-cheat-vacation to check it out, feels pretty great :)