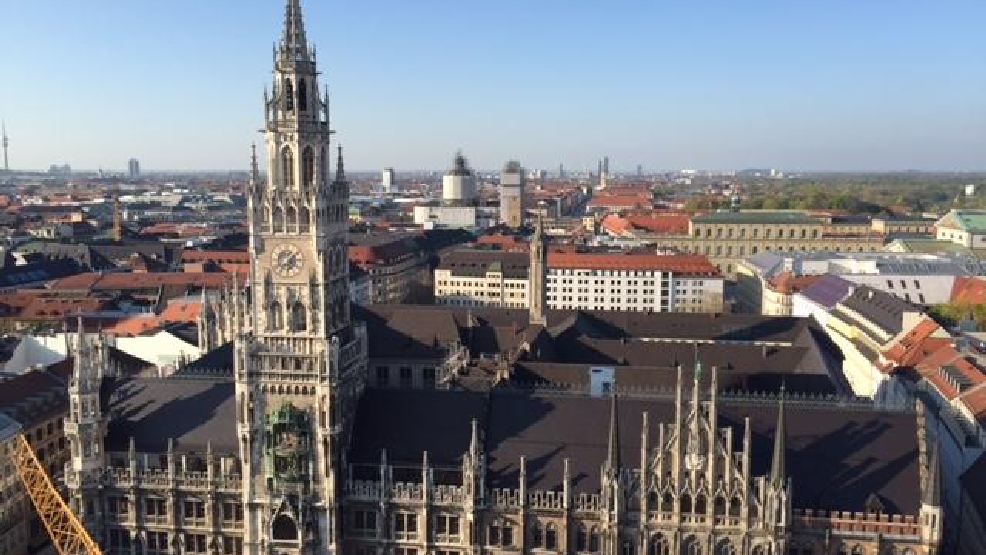 After climbing a nearby tower, the view of the city from the top was amazing. (Image: Susan Galbraith / Seattle Refined)
SEE MORE

Our writer Susan Galbraith is also a singer/songwriter! She is touring Europe right now promoting her new album "Some Freedom", and blogging for us as she goes. First stop was Amsterdam - next up is Munich!

I wish I could say my Germany travels were as smooth and stress-free as my arrival in Amsterdam but what would a European adventure be without a couple rough patches? The flight to Munich from Amsterdam was short and sweet but filled with a lot less friendly characters. It could be the fact that our flight was so late at night, bringing us to the train around 11 p.m. Let me say the transportation systems in Europe are extremely fast and effective. Pretty easy to figure out usually, it came as a shock when we got kicked off at a station at midnight, three stops short of our destination.

Dark, huge, and mostly empty - we began to search for alternative trains hoping that they were still running. Becoming more and more grateful that my friend and fellow Seattleite was with me, we were being approached by a creeper as a military guard strapped with a machine gun, stepped in (much to our relief) to give us directions. Apparently, they shut down certain trains late at night and had to wait on another one to take us to our final destination.

Air B&B's are extremely popular in Europe and significantly cheaper than a hotel regardless of the country. Renting out someone's apartment or house in the city is a unique way to become familiarized with your new surroundings. Our Amsterdam friend made us a reservation and gave us the address that we put into our google maps. Arriving at 1 a.m., we entered into a huge concrete-filled city that reminded me of a rough New York neighborhood. Passing homeless people sleeping on the streets and maneuvering through dark alleys with our suitcases had us feeling beyond uneasy. After about fifteen minutes of nervously hustling though the streets, we realize we had put the address in INCORRECTLY. Tired, frightened, and confused - we tried to not to lose it as we retraced our steps, ten minutes in the opposite direction to finally meet the person who's apartment we'd be renting for the next couple days. While it felt a bit strange, we were so relieved to indoors, and went to sleep hoping tomorrow would be a much better experience.

Food: In the light of day, Germany seemed much different. Taking a suggestion from travel author Rick Steves, we wandered to a restaurant and beer hall favored by the locals. Augustiner-Keller not only had the servers in traditional German lederhosen, but the first bite of a traditional German dumpling had me immediately taken back to my grandmas cooking from my childhood. The beer tasted sweet and refreshing and paired perfectly with the sausages, sauerkraut, dumplings. Colorful soccer jersey's littered the outdoor courtyard as an array of friendly competitive banter and songs sporadically filled the air.

The evening ended at Hofbrauhaus Munchen, the rowdy tourist attraction in Munich that is everything you would think a pub in Germany would be. Huge beer steins, a polka band, sausages, and boisterous people. Meeting people from all over the world by sharing tables and rounds of drinks, this was one of my favorite places. A couple of steins later, closing the restaurant down, I'm once again reminded of European businesses and their limited hours. Stores and restaurants open late and close early, but being a night owl, the late mornings don't bother me at all.

Dachau Concentration Camp was an extremely sobering and meaningful experience. The guide was direct and knowledgable, taking us through that horrible period in history which proved to be quite an emotional journey. While it was difficult to take in, learning as much as I did and marking that time is important to make sure history does not repeat itself, as well as honoring the victims and families involved. The four religious monuments built to honor and acknowledge the faiths of the prisoners stand tall at the end of rows of barracks, marking the bravery and legacy of all prisoners held there.

Architecture is something of marvelous beauty in this country. The extravagance of castles and palaces bring people in from all over. Gorgeous white swans in massive ponds greet visitors at the Nymphenburg Palace. Moldings made of gold and larger than life statues galore, I immediately felt transported into an episode of Downton Abbey.

While I enjoyed my time, I think upon return, I'd prefer to immerse myself in the smaller Bavarian villages and get to know the residents that have been there for years. However, wherever you travel in Germany, the one given comfort you can count on is the beer and schnitzel will never disappoint.