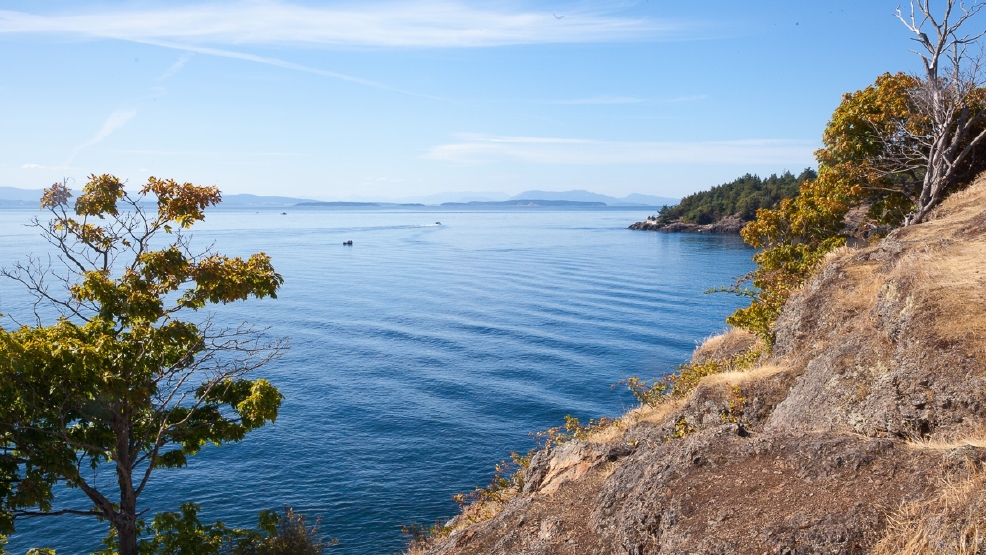 7 sensational things to do on San Juan Island

I love that each of the islands in the San Juans has its own distinctly different personality. San Juan Island is the second biggest and most populous of the islands, with a less wild, more gently undulating landscape than Orcas Island, much more going on than Shaw or Lopez Islands, and a chill, relaxing vibe that is hard to beat.

This itinerary, which goes roughly anti-clockwise round the island, can be completed in a day if you're starting from the ferry terminal at Anacortes, so is a perfect day trip if you're staying on Whidbey or on one of the other islands. If you're coming from Seattle, it might be best either to take a plane - Kenmore Air flies into Roche Harbor - or make a weekend of it.

Friday Harbor
If you're arriving by ferry from Anacortes you'll arrive directly into Friday Harbor and it's worth spending some time in this, the only incorporated town in the San Juans. We headed straight for Café Demeter for fabulous coffee and a perfect almond croissant. We also picked up delicious quiches and salad for a picnic later. We then strolled round the town, checking out the mindblowing Funk & Junk antique shop and 'used book heaven' Serendipity Books. San Juan Island Cheese also came highly recommended but was shut when we visited. We walked out onto the jetty to see the schooner Spike Africa, and wished we'd booked a sunset sail and then headed to the aptly name World's Skinniest Latte Shop for a freshly made green juice before heading out of town. If you haven't managed to get your car onto the ferry, then both Susie's Mopeds and Island Bicycles provide alternative ways to view the rest of the island.

American Camp
Our first stop as we headed round the island was American Camp. In 1859 British and American forces agreed to a joint occupation of San Juan Island until the water boundary between them could be settled following the infamous Pig War, and the two opposing forces encamped at opposite ends of the island. American Camp is on an exposed point with amazing views out to Mount Baker from Jakle's Lagoon, hiking trails and picnic tables.

Pelindaba Lavender Farm
I've become a bit of an expert recently on lavender farms and the Pelindaba Farm is one of the most beautiful I've visited, even though the lavender was dark and dry so late in the season. You are welcome to walk the fields in this little corner of paradise and there's an excellent gift shop with wide range of lavender products for culinary use or personal care.

Whale Watching from Lime Kiln Point
We were already on a high from scented flowers, sunshine and stunning views of the volcano, when things took a turn for the downright magical at Lime Kiln Point. We had already seen this part of the island from the water on our whale watching trip last year, and sure enough we got there just in time to see a pod of orcas swim by. Whales are not guaranteed of course, but it's the best place on the islands from which to see them. Even without orcas, the views are breathtaking, but with the distant sounds of orcas breathing and slapping their tails on the waves, the whole experience becomes otherworldly.

English Camp
In contrast to the exposed position of American Camp, the English chose a sheltered site next to the calm waters of Garrison Bay for their camp and the two sites together comprise a stunning US National Historical Park. Many of the original buildings remain to this day and the parade ground was a tranquil place to watch deer gathering in the golden evening light.

Roche Harbor
We arrived at Roche Harbor just in time for happy hour and took ourselves to the Madrona Bar & Grill on the waterfront for great frozen margaritas and a pail of prawns. The site of an old limeworks, Roche Harbor is the island's other main town and hosts a resort of the same name, focused around the old Haro Hotel. The huge yacht marina is considered to be one of the best in the West and the town is a true haven for sailors. The quirky Roche Harbor Sculpture Park at the entrance to the town hosts over 120 pieces by Northwest artists and is a great place for a ramble.

Duck Soup
I've never been to a restaurant quite like Duck Soup. Located in a quiet clearing in the forest, the rustic cabin and terrace lit with twinkling lights are an idyllic place to spend a warm summer's evening. Chef and owner Kyle Nicholson offers an innovative menu with everything made from scratch from produce grown, fished, raised or foraged in his garden or on the island. We enjoyed a pisco sour sweetened with beets, deconstructed eggplant parmigiana and an impeccably cooked duck breast. Diners are greeted by the restaurant's cat and I kept half-expecting fairies to peek out at us from among the trees.