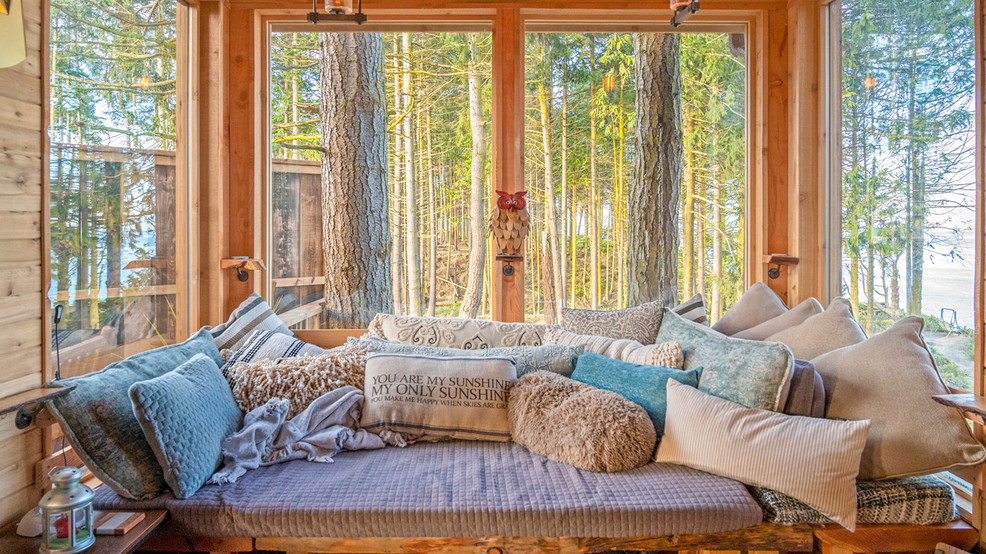 5 rental homes in Washington straight out of a fairytale

When you think of fantasy-themed lodging, you probably think of castles in Ireland or the Hobbit set in New Zealand. But Washington state is full of magic, too. (There's even a hobbit house for rent in Orondo!) Twilight locations aside, we have cool castles, dramatic waterfalls, beautiful bridges and several enchanting vacation rentals — some less than one hour from Seattle. We've rounded up the best fairytale-inspired digs packed with fantasy aesthetic, from a rustic working mill to a medieval tower in lavender country.

Located on the Olympic Peninsula, Sequim's first claim to fame is lavender season, but its second should be this whimsical castle just outside of the downtown strip. The silo-turned-castle features round walls and each of the upstairs bedrooms has shutters that open up to the center, spherical tower. But beyond the reimagined architecture, this rental is the epitome of make-believe with medieval-inspired decor such as grand wooden and iron front doors, pewter steins and serve ware and a suit of armor with a spear.

The home even features several closets and trunks full of dress-up clothes for kids and kids at heart, as well as a media room stocked with castle-themed games and shelves of fantasy books. With so much uncertainty still around travel this year, this would be the perfect place to celebrate a kid's birthday as a fun overnight staycation. Or when the iconic lavender festival resumes, make this your home base for exploring.

The Sequim Castle's owners also jumped on the treehouse trend and recently finished The Eagle's Nest, a 35-foot-tall treehouse overlooking the Strait of Juan De Fuca. The Port Angeles property has a total Swiss Family Robinson vibe with two hammocks inside — one suspended in air from the second-floor loft — and literal tree trunks and branches running through the house. The bathroom even features a whimsical branch intertwined with the luxe rain forest shower head.

This rental is a book lover's dream with a massive bay window daybed stuffed to the brim with comfy pillows and super-soft muslin blankets. The treehouse does have Wifi, but it's also a great place to practice a digital detox and unplug for a couple of days as you can watch eagles that frequent the bluff and even hear the waves methodically crashing from below.

Remember Belle's home in "Beauty and the Beast"? I always thought it was so neat that the cottage had a watermill. And over in Snohomish, there's a rustic (reclaimed from Seattle) barn-turned-treehouse with an actual working mill. The cozy retreat is perfect for a romantic weekend getaway with a giant, modern soaker tub and views of Mount Pilchuck framed by giant French doors.

The property is also peacefully secluded with the sounds of the gentle stream and an occasional rooster in the distance. However, unlike Belle's provincial pad, this mill comes with a flatscreen TV and WiFi.

Speaking of Belle, there's a tiny house in Leavenworth named — and decorated — after the iconic fairytale princess. The 307-square-foot mini chateau is one of five adorable new rentals at Leavenworth Tiny House Village. Built by Tumbleweed Tiny House Company in Colorado Springs, the village has a distinct Franco-German nod to the rest of the architecture in Leavenworth, but each tiny house has its own unique personality.

Belle has many references to the 1991 Disney animated classic, from a Beast-inspired royal blue, yellow and white color palette to red roses to gold candlesticks. Unlike some of the smaller tiny homes, the Belle can sleep up to four, so it's perfect if you're bringing kiddos, too.

Whidbey Island is home to many adorable farmsteads, and you can stay the night at one in Clinton. Appropriately named the Mother Goose Cabin, the Airbnb (with some seriously cute cottage-core vibes) property features several feathered friends, from chickens to Sebastopol geese a la Mr. Goose in Cinderella.

You can even collect your own multicolored chicken eggs in the morning from the farm's nesting boxes. In true rustic fashion, the rental doesn't feature indoor plumbing. But a shabby-chic bathroom is just next door with an ornate clawfoot tub, homemade lavender bath salts and a gorgeous upcycled chandelier.