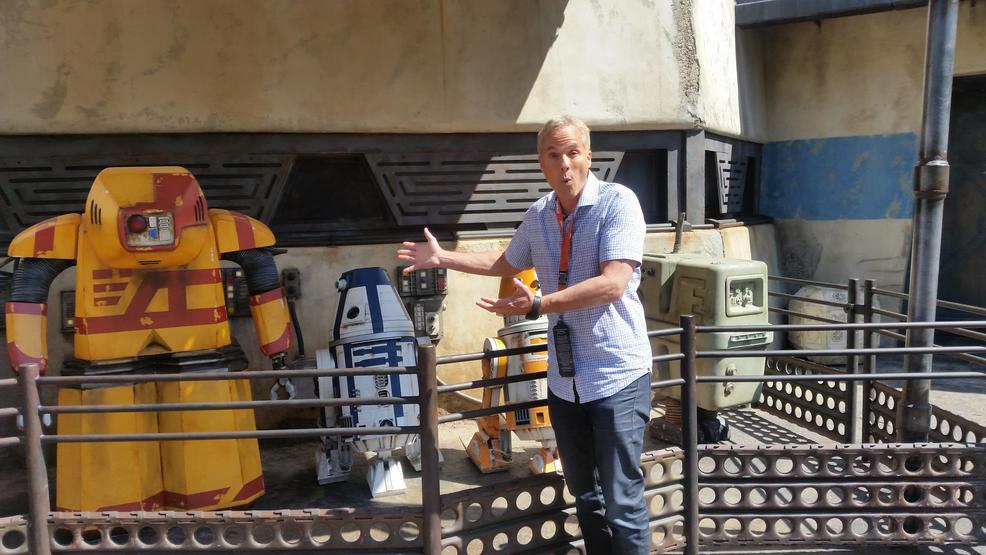 Visiting the largest land ever created in Disney Parks history

Disneyland Resort just opened up their much hyped new land, Star Wars: Galaxy's Edge. It's 14 acres of out-of-this-world fun, in fact - it's the largest land ever created in Disney Parks history. There's so much to do on the Planet Batuu, head into the marketplace and pick up a unique gift, or stop by Ronto Roasters where a Smelter Droid turns a spit of meat.

You can even head to the Droid Depot and design your own droid. Get this - there are 28,000 different combinations of droids you can create! And no doubt the biggest attraction at Star Wars: Galaxy's Edge is Millenium Falcon: Smuggler's Run, so of course - we had to see what all the excitement was about, and even take it for a spin!

"It's docked in the middle of Planet Batuu, at the Black Spire Outpost," said Ride Project Engineer Steve Goddard. "She's a beauty. Over 100 feet long."

Goddard was the project engineer responsible for designing and building the ride.

"This is the hollow chess table," he said. "You've seen Chewy play here many times, playing droids, having fun at the chess table. We have the helmet that Luke Skywalker wore when he is learning to use his lightsaber."

It's the first time ever in the history of Disney imagineers created a full-size Millenium Falcon, she's the anchor attraction at Disney's Galaxy's Edge.

"You can board the cockpit with five of your friends and you can each get a separate position," said Goddard. "So you get a chance to be a pilot and engineer or a gunner, and you get a chance to pilot the Falcon through the galaxy. You can crash it, you can be successful, it’s up to you."

Once inside the cockpit, we took the front seat as a co-pilot on the fastest ship in the Galaxy. The attraction is so realistic, you really feel like you're on a galactic mission! And thankfully, the gunners keep you safe using blasters and missiles. We controlled the vertical motion of the ship, and it wasn't easy steering that hunk of junk at hyper speed!

"It is a big time ride," said Goddard. "It’s a really enjoyable experience and it gives our guests a chance to try again and again and see how well they can fly the Falcon and maybe - if they are not so great the first time - they will get better the second time around."

A short time later, the Millenium Falcon got us back to Planet Batuu in one piece, no doubt the coolest ride in the galaxy.