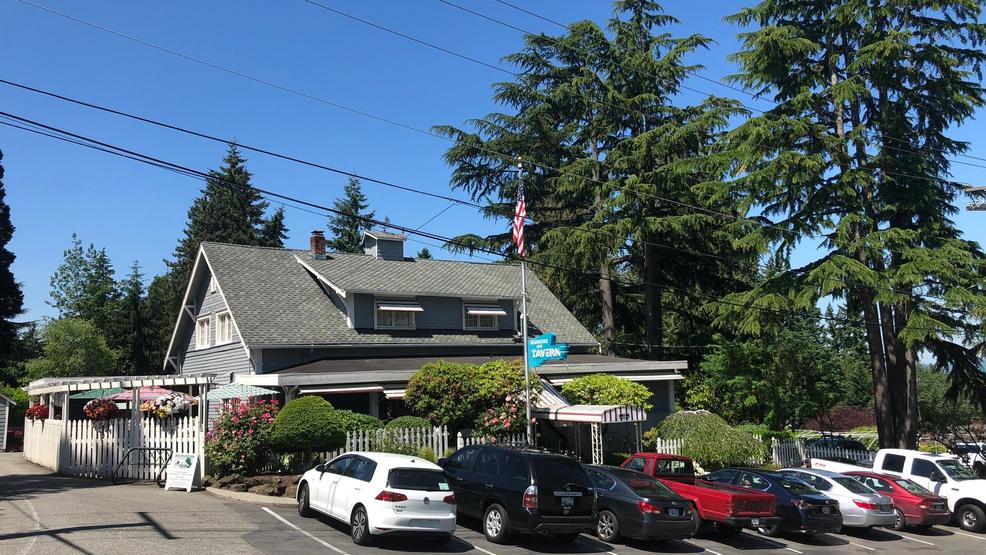 From the outside, with its white picket fence and beautiful blooms, the Roanoke Inn on Mercer Island looks like a stately country club. But with green walls and tons of vintage treasures - it's delightfully different on the inside. Build in 1914 as an inn, these days it's a bar and restaurant for 21+ crowd and a local fave where 'Friends Meet Friends.' Dorothy Reeck is the owner/caretaker. (Courtesy Seattle Refined)
SEE MORE

From the outside, with it's white picket fence and beautiful blooms, the Roanoke Inn on Mercer Island looks like a stately country club. But it's delightfully different on the inside.

Walk through the front door and you're greeted with dark green walls, eclectic decor, and a kitchy-slash-cozy vibe. There are retro beer signs, a phone booth (!), a juke box that plays CD's (!!) - and MUCH more.

"Sometimes somebody will be walking or riding their bike, [and] they show up to the door," said owner Dorothy Reeck. "And their eyes get big and they look up and around and they look over and go, 'How long has this place been here?' From the records it’s 1914."

Although Reeck owns this special spot, she prefers to be called its caretaker. Today, the Roanoke Inn is a busy bar and tavern, a local favorite for generations. But it was originally built to be an inn.

"It’s an old building that was built to take care of people coming over from Seattle to Mercer Island and their little cabins along the lake," she explained. "Each room having a little bed and a place for clothing, people spent the night here."

But that was just the beginning. This building has been many things in the past century - some say it was a house of ill repute.

"It could have been a brothel," Reeck laughed. "I don’t know anything about it. But it’s funny and it’s part of the story."

During Prohibition, it was a place to gamble and drink. In 1941, Reeck's in-laws [Edwin and Laura Reeck] bought it. After her husband passed away, Laura remarried Bill Bice, and there were some wild times at the Rowy.

"He was a cowboy and had lived in North Dakota," she said. "I never met him, but I heard about him through customers and he was colorful as could be. He wore two guns and he would flip them around, and he shot into the corners of the wall."

You can still see the evidence - aka bullet holes - from one particular episode involving the cooler behind the bar.

"One story that’s pretty phenomenal, his wife [Laura] was in there," said Reeck. "And the door is about this thick, and he just turned around and shot the door twice. Well, of course it didn’t go through, but she must have heard something. So when she got out, she really cussed him out and I guess he disappeared for awhile."

Reeck has been in charge since 1993. They have a wonderful saying on the walls: “Where friends meet friends”

"[It's] a motto my husband came up with," she said smiling.

Friends - like a group of guys we found at what may be the most coveted table in the house. It's a small room right off of the kitchen with a table and booth that accommodates bigger groups.

The group has literally been buddies for 50 years, regularly getting together at the Roanoke since they were 21.

"[We] grew up on the island together, playing tennis," said Dave Maeser. "These are the tennis studs from Mercer Island."

Like Maeser and his pals, people meet here to visit, and for the great great grub.

"They love the food. They love the drinks and it’s just a special feeling and I think that’s what people are kind of drawn to," said Jennifer Usher, one of the General Managers, along with Arquimides 'Arqui' Sylvester Lopez, who is in charge of the kitchen.

They cooked up a few customer faves for us including the very popular Cheddar Burger, and homemade Spaghetti - a recipe created by Laura Reeck, and a staple at the Rowy. They also make a delicious Carne Asada.

And then OF COURSE - an amazing array of drinks.

"A lot of beer of course," said Usher. "Our bar manager has such a great selection. Our margaritas are really good, there’s a lot of drinks, a lot of people like the whiskey."

Folks can sit inside the building, or on the porch, patio or backyard.

"It’s one of my favorite places to come," said Jill, a customer who has been coming for 25 years. "It’s historical, it’s comfortable. I love the outdoor seating."

That may seem like a long time, but the Roanoke Inn has been in business for over 105 years! More than the place - it's the people here that make it so special.

"With Dorothy as the owner, the caretaker - us working together at the front of the house and back of the house - you have that uniqueness that just kind of spreads," said Usher. "And you have that just camaraderie and the customers feel it. The staff feels it. And it’s just kind a like that weird magic that happens."