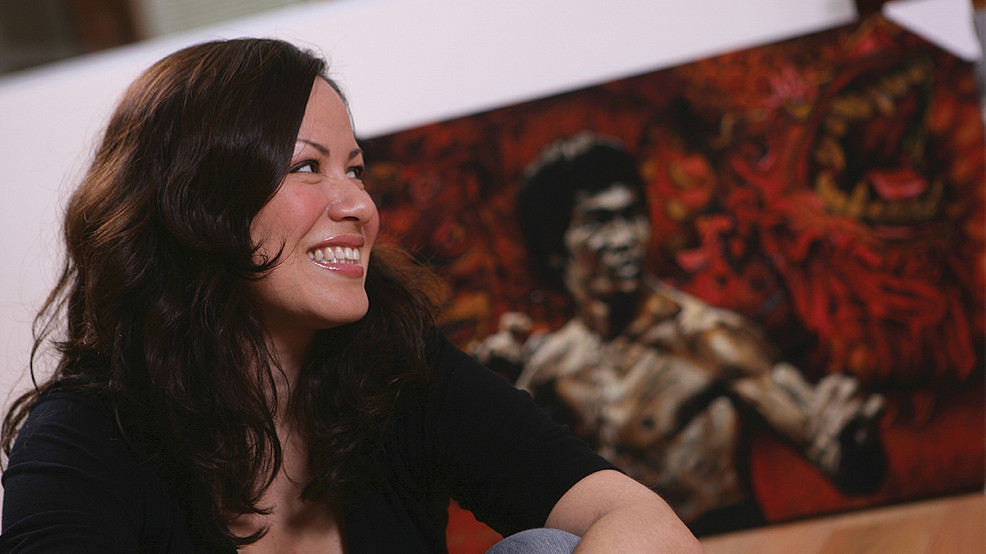 Shannon Lee is the daughter of martial artist and movie star Bruce Lee. She is sharing his philosophy for life in a new book titled 'Be Water, My Friend.' (Image: www.BruceLee.com)
SEE MORE

From musician Kenny G, to rapper Sir Mix-A-Lot to actor Tom Skerritt, so many incredible people have called Seattle home over the years. That includes martial arts legend and movie star Bruce Lee. As a young man, Lee lived here in Seattle and worked at the famous Ruby Chow's restaurant. He also attended the University of Washington and opened a martial arts studio in the area.

Lee passed away in 1973, but his legacy and work are still extremely popular today. In fact, the official Bruce Lee Instagram account has over 6.3 million followers! This Thursday, November 27, 2020 marks what would have been Bruce Lee's 80th birthday. Refined caught up with his daughter Shannon Lee to chat about his legacy and the new book she recently released titled "Be Water, My Friend: The Teachings of Bruce Lee."

Seattle Refined: Shannon Lee - you’re an actress, martial artist, producer, actor, author and keeper of your father Bruce Lee’s legacy. You just released a new book that I’m so excited about called "Be Water, My Friend: The Teachings of Bruce Lee." Can you tell us about it?
Shannon Lee: This book for me was such a beautiful process. I’ve been sitting with my father’s words and teachings for a long time in many different ways. And this book is really my gift. You don’t have to be a Bruce Lee fan, you don’t have to be a martial artist. It’s really just every day thoughts on how to approach life.

I really enjoy your writing style as well, and the way you guys kind of wrote this book together.
"Be Water, My Friend" focuses primarily on my father’s philosophy about the notion of being like water and what that meant to him. So each chapter kind of takes a different layer of that philosophical principal and breaks it down. As you say we kind of do it together, right? I tell stories about his life and I tell stories about my own life, and ways we can look at these words and philosophies and apply them to ourselves as we navigate our own lives.

A lot of people know your dad of course as a movie star, a martial artist - all these wonderful things but they may not have realized he was a poet and a philosopher.
My father was really like the quintessential Renaissance man. There were things he couldn’t do, like he wasn’t much of a handyman or cook. But in the things that he was passionate about, that he loved and that he had some facility with - he just did everything to the utmost of his ability to a level of quality and sort of artistry. And that included his martial arts, and his filmmaking.

When [the hit movie] "Enter the Dragon" came out which I think was actually after he passed away, that was really a groundbreaking film for many different reasons including the fact that he was the star.
He was very direct about wanting there to be an actual portrayal of an Asian man in Hollywood. And that’s why when "Enter the Dragon" came along a lot of people on the other side of the equation was like whatever - it’s kind of this action movie it will be fun. For him he understood. The ability to star in a Hollywood film. The ability to put my mark on it. To share my culture. To share martial arts. To share my philosophy. He understood the opportunity he was being given - which is why he went after it so doggedly.

I know your dad lived many places around the world and in the United States but of course here in Seattle we think of him as one of ours.
When he came back to the United States when he was 18, he came through San Fransisco, he pretty quickly made his way up to Seattle. And it was in part because our family had family friends up there who gave him a job and a place to stay. And so he worked and lived in Seattle and it was in Seattle where he really started laying down his roots as an American and engaging with people. He got his GED. He went to the University of Washington. He started teaching in Seattle. He started making friends and having a sense of community in Seattle. My mother’s from Seattle and they had always loved their time there, they had such a fondness for the city, and he always wanted to love out his final years in Seattle so that’s here she laid him to rest.

Shannon, you are obviously the expert what it comes your dad. Did you discover anything when you put this book together that you didn’t know already?
I feel like I discover more and more about my dad all the time. The purity of what he was after. And the amazing strides he made in his life. By applying his energy so positively in the direction of his dreams and his goals.

Do you mind sharing a little bit from "Be Water, My Friend" with us?
“Remember my friend it’s not what happens that counts it’s how you react. You mental attitude determines what you make of it. Either a stepping stone or a stumbling block.”

That’s beautiful. I believe November 27th [2020] would be his 80th birthday, which is amazing. And yet he’s just as popular and his teachings just as timeless as they were decades ago.
They have a certain universal quality and they talk about the process of being a human being. Which is something we’re all engaged in no matter what decade we’re in no matter what century we’re in right?

Thank you for this absolutely gorgeous book and for your time today.
Oh thank you so much. I appreciate it.

Shannon Lee is currently working on 'The Bruce Lee Podcast' as well as other media projects. Visit her official Instagram account for more. You can find 'Be Water, my Friend' at bookstores nationwide. For more more about Bruce Lee, check out the official Bruce Lee website and Bruce Lee Instagram account.