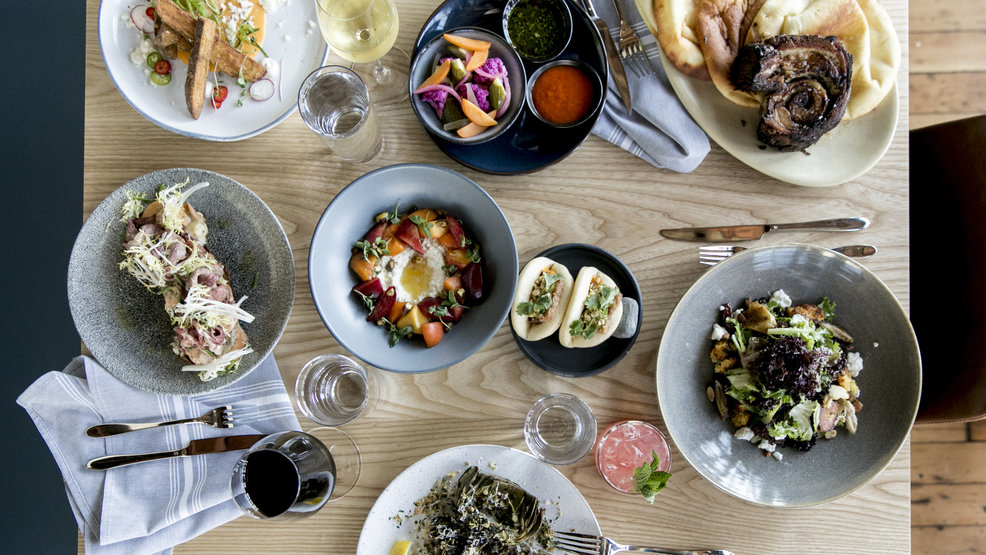 From Fine-Dining to Finger Food: New Ballard restaurant is focused on family

PSA: Mitch Mayers, the man behind Sawyer, has been chosen as one of only a handful of chefs to prepare tastings at the James Beard Foundation's Taste Seattle Gala this October 4, 2019! Donnelly will be joined by Monica Dimas of Milkwood & Co., Shiro Kashiba of Sushi Kashiba, Tiffany Layco of Andaluca and Eric Donnelly of RockCreek at the Fairmont Olympic Hotel where guests will enjoy THREE receptions: VIP, Cocktail and Tasting, and Dinner and Dessert. Tickets are still on sale for an epic night of eating.

It sits in what was once a saw mill - a building more than 90 years old. In the midst of one of the city's most vibrant restaurant scenes, yet close enough to Salmon Bay to smell the salt water through the windows.

"Sawyer means 'One who saws,' said Mitch Mayers, executive chef and owner of Sawyer. "The saw mill industry was so important to Ballard, and we just wanted to embrace the Ballard neighborhood."

Even hours before the first diners will walk through the door, Sawyer is already alive with activity. For Mayers the last couple weeks have been both exciting and a little scary. This is his first restaurant. A dream becoming reality.

"This is pretty much 15 years in the making...it's become exactly what I hoped for," he said. "It's just little touches of myself, my wife, my family that are in every corner. Between the chairs we picked out, the lights. I actually did all the construction in the bathroom [myself]!

It truly is a family operation.

"My son was here. He's days away from getting his first steps out, and so he was practicing walking on this floor literally two days ago. We've got a Pack N' Play in our office," Mayers laughs.

But this man is more than a husband, father, and now business owner - he's also one of the city's rising star chefs. He spent the past four and a half years at Lark, a Seattle fine dining institution, working his way up from line cook to chef de cuisine.

"I've never worked with somebody who works so hard, so I wanted to be around that," said sous chef Julio Avila. "And then I know he's whimsical and playful with his approach to food, and I wanted to be a part of that."

"This idea that everything has to be so delicate and plated with tweezers is just not really my approach," explained Mayers. "You look at the menu and a lot of the food is actually eaten with your hands. It's messy, it's fun, it's relaxed, but at the same time the execution, the standards, the creativity is all that you'd expect to find at some of those other restaurants in the city."

The menu is playful and approachable. Everything is, fittingly, served family-style. Think pork belly steam buns, ahi tuna with crushed avocado and kaffir lime, homemade dilly bars made with cookie dough semifreddo and a Theo Chocolate magic shell, s'more choco tacos with peanut butter ice cream and meringue in a graham waffle cone, or one of Mayers' personal favorites, the cheesy bread.

"Focaccia di Recco is basically the dish that we're being playful with," he said. "It's cracker dough basically, that we're stuffing with traditionally crescenza cheese, which is similar to mozzarella. But this is where we're doing the pimento cheese and 'nduja filling."

While it's a straightforward recipe, the amount of work that went into it was anything but.

"The balance of crispiness and chewiness, the filling...we went through about 15, 20 iterations of recipe testing before we got it to where we want it to be," said Mayers.

That's the thing about this restaurant. Everything is done with thoughtfulness and executed with intent. In opening Sawyer, Mayers isn't just making delicious food, he's also building a legacy for his team, for himself and for his family.

"It's about having a place that we're proud of. That we really want to come to work everyday. That gets me up in the morning, that's a reason to get out of bed and come to work and be away from my son. And at the same time, have a place for my son to grow up and learn hard work and all of the things it takes to make this happen."