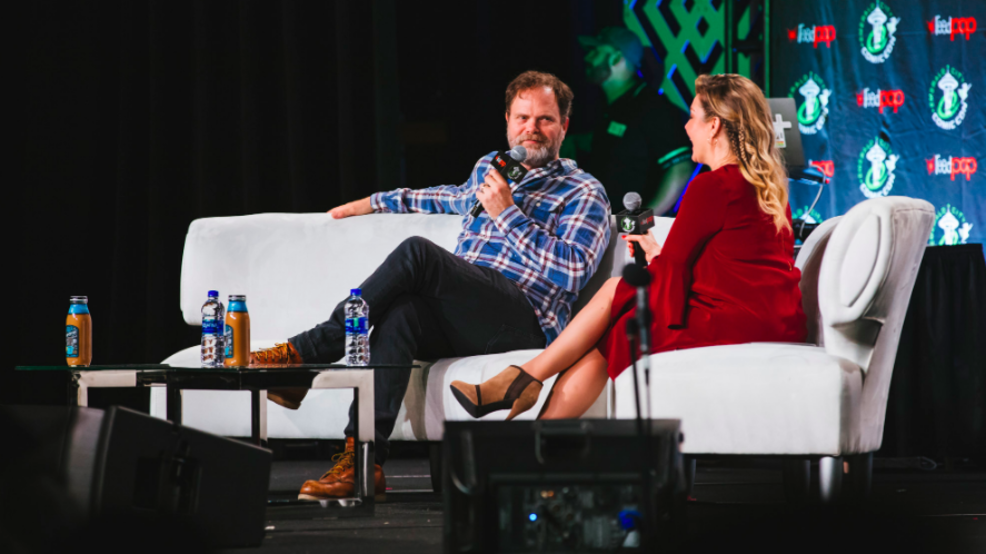 "Don't hate me for living in Los Angeles, okay," Rainn Wilson told me with a smile.

Wilson may live in Southern California now, but he'll always be a Seattle guy.

"I remember when I was growing up here in the 70's and 80's. There were all these anti-California bumper stickers, like 'go back to California' was a big thing, Seattle will always be first in my heart," said Wilson.

I caught up with Wilson during a recent return to his hometown and one thing is clear, he's a true Seattleite.

"I was born at University Hospital, lived in the U-District as a kid, I went to Shorecrest High School here, did a year at the University of Washington. My mom still lives in West Seattle. [She] sells jewelry at the public market, so my roots here are really deep and I love this city. I mean this is a special, special place."

It's not just where Wilson grew up, it's also where he met his wife, writer Holiday Reinhorn, while both were students at UW.

"I was texting my wife last night. We used to go for a fancy dinner date to the 13 Coins, which is awesome, old school. When we were dating in our 20's, we'd be like 'let's get the fettuccine alfredo'...I love it. The waitresses and the giant booths. It's the fanciest possible restaurant for the guy who's just come off the fishing boat," recalled Wilson with a laugh.

Rainn has come a long way since those early days in Seattle. His acting career spans more than two decades. There was a breakout performance in HBO's 'Six Feet Under' and notables roles in everything from acclaimed indie films to big-budget blockbusters.

But, his most iconic character remains Dwight Schrute on The Office. So, naturally, I had to ask him about the possibility of a reboot.

"There's been some talk of a reboot. It all depends on what Greg Daniels wants to do. He was our show runner and head writer. Everyone loves Greg and wants to do what he wants to do. So, I'm sure he's fielding calls and looking at that," Wilson explained.

Wilson's upcoming projects include the drama 'Blackbird' alongside Susan Sarandon and the aforementioned Amazon series 'Utopia', from writer Gillian Flynn. But, acting is just one of his passions. Wilson co-founded the educational initiative Lide Haiti and the ultra-successful digital media company SoulPancake.

On May 30th, he's returning to Seattle for a special one-night-only event, Rainn Wilson and Friends. It's an evening of music and comedy featuring local celebs like comedian Joel McHale and musician Chris Ballew, along with some serious, A-list, mystery guests. The best part? The event benefits a great cause. One that's close to Wilson's heart.

"It's a fundraiser and an awareness raiser. It's a 20-year anniversary for a really special non-profit that I've worked with for years called the Mona Foundation," explained Wilson. "They're based out of the Eastside, Bellevue, and they fund educational initiatives around the world. So, we raise the money in the United States and then it goes out to some of the poorest school, some of the poorest areas in the world. But, [they're] really top notch school that are doing a great job of educating kids."

As much as Rainn loves giving back, he's got another passion, the Seahawks. And he's not some bandwagon fan.

"My uncle, Doug, took me to The Kingdome in the first season. [We] saw the Hawks play the Detroit Lions and I just got caught up in the whole spirit. All these Seattle people, wearing the colors in the ugliest possible stadium on Earth. And it was an amazing experience," recalled Wilson with a laugh.

"It kind of feels like a religious experience, this community of people bonding and connecting over (the Seahawks). So I got really caught up in it...I got to meet [Jim] Zorn and [Steve] Largent when they honored them at CenturyLink Field and that was really cool because they were my heroes as a kid. And, yeah, I've stuck with them all along.

"They contacted me about it once or twice, but the schedule hasn't worked out. So maybe this year."

Wilson showed me exactly how he would raise the 12th man flag and discussed the one role he'd really like to play at some point in his career. Check out the video above to see more.

For more information or to purchase tickets to Rainn Wilson and Friends click here.