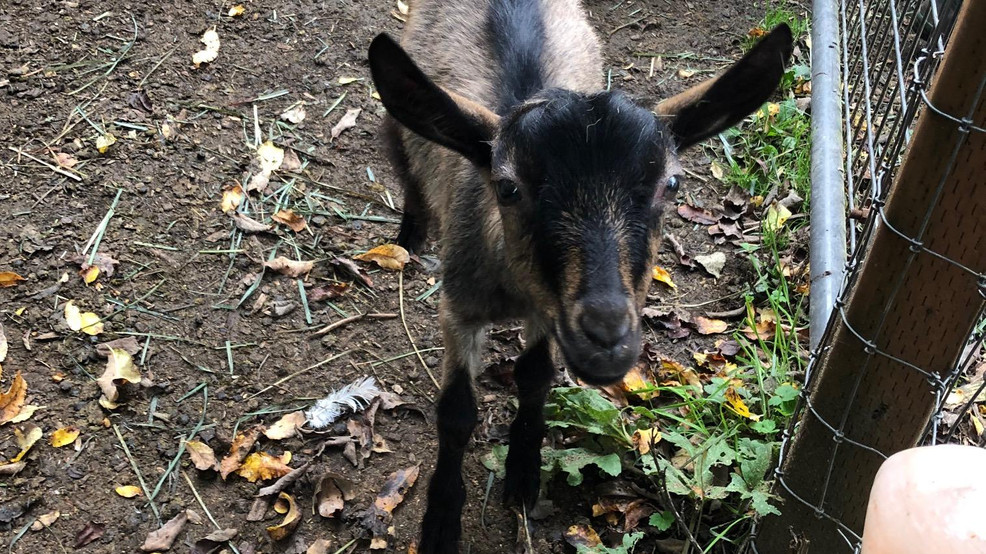 Nestled in Maple Valley, there's a picturesque paradise. But it's not for people - this place is totes for goats!

"They like to nibble, they like to climb on things. They’re very playful, they need stimulation. They like to run and play and they love to be brushed," said caretaker Barbara Jamison.

They even have a darling nickname.

"We call them pasture puppies," she said. "So they’re just like puppy dogs if you get the right ones."

For nearly two decades, Jamison has been caring for these creatures. It started one fateful night.

"A friend of mine that owned a feed store called me late one rainy night and said 'Somebody left two goats tied to a post outside the store, do you want them," recalled Jamison. "I said OK. So I went and got them and brought them here and I was like ‘Oh my gosh these goats are amazing’. They were friendly and fun."

Since then, she's been saving them from slaughterhouses and auctions and delivering them from other dire situations.

"You carry them out and they’re in such poor condition,: she said. "They’re defeated, they’re emaciated and they can’t stand up."

Turns out that we people have a ways to go when it comes to understanding goats.

"So many people feel like they eat tin cans and tie them to a tree in front of a blackberry bush." That stereotype couldn't be further from the truth. "They’re very sensitive, intelligent they get very attached to their people."

"We have a two-fold mission. The main focus is rescue, rehabilitate and re-home goats in need. And the second is education - to educate people how to care for them properly and what they’re really like."

At any given time there are typically about a hundred goats at the rescue, from babies to seniors and everything in between.

"We have, between the two farms together, about ten and a half acres and we have about five more acres available."

And there are plenty of humans lending a hand too.

Susanna Smith has been donating her time for six years.

"I really like being a volunteer here, because it’s kind of therapeutic, she said. "I do a lot of stall mucking. I make sure the goats have fresh hay. We do waters, we try to save a little time for goat petting and goat love!"

So far, Jamison and her team have helped many of these cute critters find their forever homes. The number of adoptions is heartening.

"I’d say 3,500 - I mean everything we get we adopt out," Jamison noted. "We have a small percentile that are un-adoptable. This is one, Everly, (who’s blind), and honestly if we found the perfect home she could be adopted too."

At Puget Sound Goat Rescue their goal is to help as many goats as possible.

"That’s what sort of differentiates us from a sanctuary. Because we bring them in, and adopt them out we can rescue more that way."

If you think that you might have the perfect 'home sweet home' for a goat or two - there are a few 'goat-lines' to consider if you're interested in adoption.

"They need a fenced acreage [and] they need stuff to do," said Jamison. "They don’t like the rain, so in our long winters, they spend 99% of their time in their shelter. It has to be tall and roomy, like 8x10."

Additionally goats are social - "An only goat is a lonely goat." Meaning they need to have a companion goat.

Finally, when choosing a goat, Jamison stresses that "it's important to understand when looking to add pet goats to their family that they make their decision based on temperament - not size, color or breed. We always work with adopters to adopt the best goats for their home."

Finally, there's a misconception about what goats can and cannot eat.

"They have sensitive and complex digestive systems and need high quality hay to eat. Goats eating tin cans, garbage chewing on sides of buildings, are either not being fed properly, not being fed at all or are bored and or lonely."

The glorious goats at Puget Sound Goat Rescue aren't simply surviving - they're thriving. And that brings Jamison a lot of happiness (that and the cuddles of course).

"You watch them rehabilitate back to life, you watch them walk down the driveway with their new family, their adopters. You can’t put a price on that."

For more information about Puget Sound Goat Rescue, check out their website and Instagram feed (it's full of gorgeous goat photos).