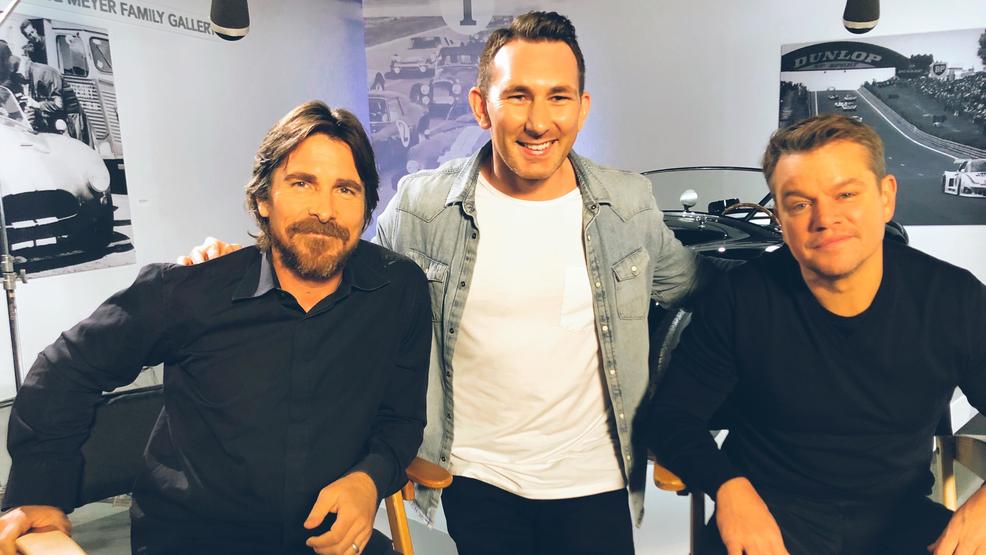 It's an edge of your seat thrill ride brought to life by two of the biggest stars in movies.

In Ford v Ferrari, Matt Damon is visionary American car designer Carroll Shelby, while Christian Bale plays the fearless and sometimes stubborn British-born driver Ken Miles. Together they set out to build a revolutionary race car for Ford Motor Company. Their goal? Beat Ferrari at the 1966 24 Hours of Le Mans.

Based on a true story, Ford v Ferrari marks the first time Damon and Bale have shared the screen together. Refined recently traveled to the Petersen Automotive Museum in Los Angeles to discuss the film with the two Oscar-winning stars.

Seattle Refined: Ford v Ferrari is an exhilarating, action-packed film. I was stunned to learn (Director James Mangold) shot all the action on the race track without CGI. From an actors' perspective why was that important?

Christian Bale: I think you really feel the difference. The nice thing about when you're really doing it is that you get these great accidents that happen. Stuff that you never could've planned for. And it's also so much easier to act within that when you really are rattling around in the car. Even if I'm not actually driving it, if I'm being dragged by somebody you're still getting all the bumps in the road and you're still right in it. It's just a wonderful, exhilarating feeling. It wouldn't have been nearly as much fun for us if we'd have been doing this in front of a green screen sitting in a stationary car...

Matt Damon: No. And as you say, you can just feel the difference. You know the vibration and the interactive light (from) the sun as you're going around. You can just feel that it's really happening (as opposed to) on a sound stage.

I know you have an incredible stunt team for this film, but how did you both prepare for those scenes in the car? What was the training like?

MD: You just figure out what you have to do in the movie and you get prepared to make that stuff work. Christian went to driving school and even if he's not going to race 100% of the time you want to be able to look like you know how to drive a race car.

CB: It's also just a lot of fun, you know what I mean? It's so much fun. I went for a week at Bob Bondurant's Driving School. We ended up in an open-wheeler which is just addictive and fantastic. And then initially we started (filming) at Willow Springs International Raceway and I'd just say to (Director James Mangold) I've got to go practice a little bit. They weren't even filming. So just being able to take one of these around [gesturing to a nearby race car] and know that I'm not going to (crash), that is just exhilarating beyond belief. But we had some of the best racing drivers in the world. So for Matt or I to think that we could do better than them would be a little stupid.

If you're both on the track, and you get to race each other, one lap in the same car, who wins?

MD: I don't know. Christian probably has more racing hours behind the wheel. I'd like to try it though in two of those [gestures to car] that would be a lot of fun.

It's clear you guys have an amazing rapport. Was that something that developed instantly or was it over time like Shelby and Miles in the film?

MD: [Both laugh] I think there was just so much on the page. It was so clear what the dynamic was between the two characters that we just kind of serviced that...

CB: You know what's nice? It's really nice when there's something, when you have a common goal that you're both really passionate about. I mean it's lovely that. When you get to work together and do something and have that equal about it. You get an immediate bond because of that. And you get that with films by their nature. I like that. You know you get this very intense period of time with a deadline where you get to work with other people who hopefully really love what they're doing...

MD: And you feel that way about everybody on the crew. Everybody is there to do a different job and it matters so much. Everybody has to do their job really well for the whole thing to work, so there's an immediate rapport that you have with the hundred of your who've gathered to do this because you all need each other and you all know what you're trying to build together and you can't do it without each other. That's why you spend 15 hours-a-day together and time away from your families and all that stuff, because it matters to you.

Be sure to check out our review of Ford V Ferrari and watch the clip above.

Ford v Ferrari opens in theaters November 15th.This interview has been edited and condensed for clarity.