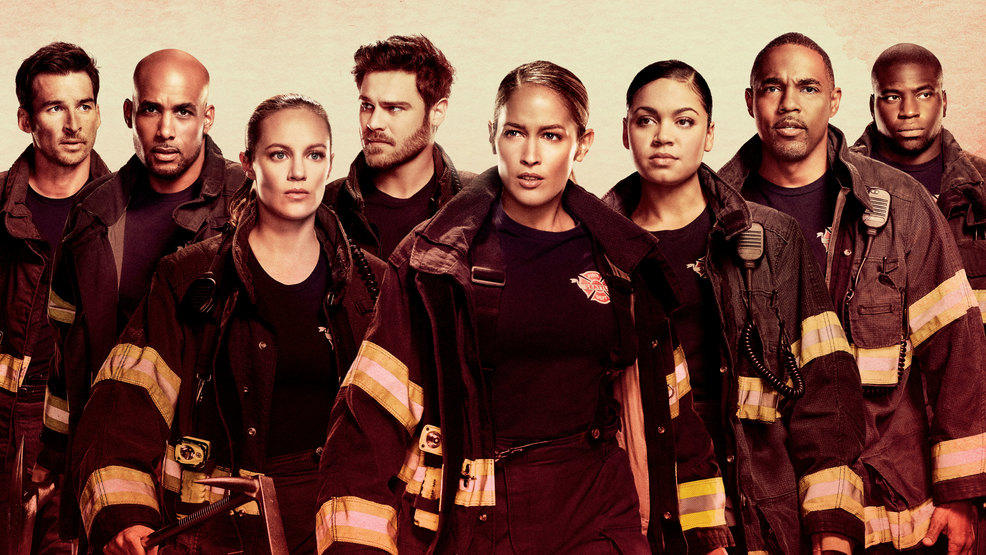 The firefighters on the hit ABC show "Station 19" are brave, bold - and let's just face it - sizzling hot! Whether they're fighting flames or succumbing to the sparks of romance, they really know how to TURN UP THE HEAT!

We got the scoop on Station 19 from the stars of the show while they were on location filming right here in Seattle. Turns out Seattle Fire Department's Station 20 in Interbay neighborhood is the perfect stand-in for the fictional Station 19.

"Where we left him last season, he was entangled with Andy [Andy Hererra] in a quasi love whirlwind," said Kodjoe. "They finally gave in to their feelings and jumped eachother."

As a refresher: Andy Herrera is a central character in the show. Her dad [Pruitt Herrera] is the former captain, and she's a lieutenant herself - and has been acting co-captain.

"So that of course brings some confusion into the firehouse and some conflict," he said. "All is fair in love and firefighting!"

The actor really enjoys bringing this complex character to life.

"What I like about Sullivan is that he is disciplined, he’s structured - he is very much committed to his job."

Semi-Spoiler Alert: Fans may get some insight on the Captain soon.

"I am also excited about the fact that we will learn a lot more about Sullivan this season than people can possibly expect," said Kodjoe. "It will be scary, and exciting."

"Maya is a former Olympian, but nowadays, she’s a firefighter," said Savre.

One of three female firefighters at Station 19, her character has really evolved.

"You’ve seen kind of a big transition from the first two seasons of Maya being Andy [Herrera] – her best friend’s - cheerleader," she said. "And kind of rooting her on and fighting for female[s], and just being a badass."

Maya's recent love interest is her bestie's ex - Jack. But Savre was mum on giving us any more insight into their future...

"You’re gonna have to tune in to find out!" she said. "Of course there's a chance their romance is going to continue, of course."

But Maya and Andy's friendship may still on shaky ground.

"My relationship with Andy this season is going to be put through a lot of tests," said Savre. "I think, like any friends, you go through ups and downs. I think we worked through most of it but there may be some kind of new obstacles that come up this season that we’re gonna have to see how they play out."

For the actress, getting to work inside Seattle's real-life Station 20 Firehouse is surreal.

"It’s weird because it’s almost identical," she said. "I mean it’s a complete duplicate - Season One they came here and just replicated it on a stage, so it’s kinda weird me and Miguel [Sandoval] were talking about it. You kind of walk out the front doors and you’re like, it feels like we’re on stage right now."

Speaking of Miguel Sandoval - he has some big boots to fill on Station 19. He plays Andy's dad Pruitt Herrera, and in some ways, he's the soul of the firehouse.

"I think he’s a no nonsense guy. He speaks from his heart," said Sandoval. "I think you can see in his eyes and on his face what it is he really thinks and feels. He’s refreshing because he doesn’t have hidden agendas. That is the thing that attracts me most about the character."

Captain Herrera has a beautiful and complex relationship with Andy.

"She‘s dealt with a lot in her young life," he said. "She lost her mother, I lost my wife when she was very young - when Andy was very young so it’s given her a shell and it's something that is interesting to see that shell getting cracked and trying to get broken into by various characters."

So what's in store for the firefighters this season?

"I think that Season 3 you’re gonna be seeing a lot more crossover with 'Grey’s Anatomy,'" said Sandoval. "So characters from GA will come over and some of our characters will go over there, so it will intertwine the series more – and some Thursday nights [on ABC] it’s going to be [like] watching a two hour movie - which is really exciting."