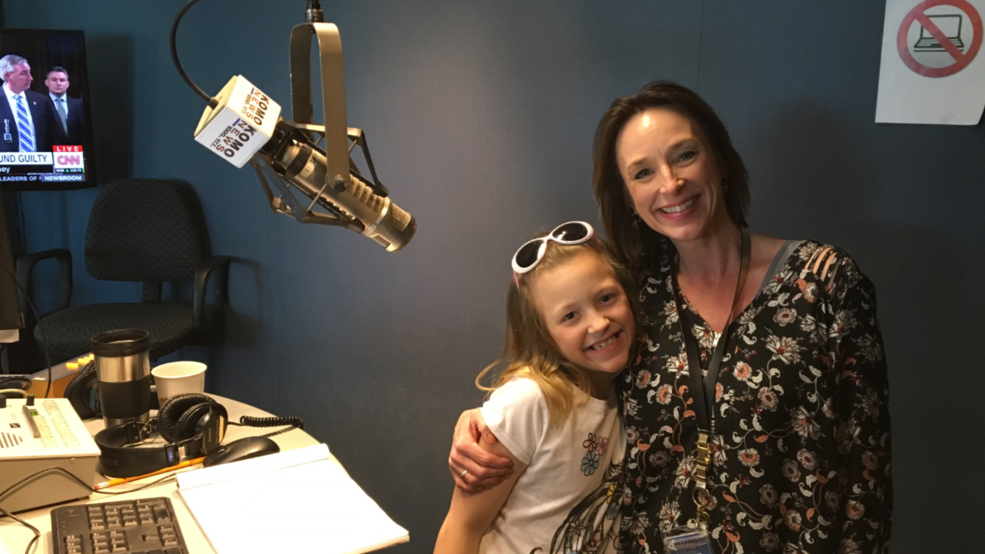 Carleen Johnson has made a career of telling other people's stories as a reporter and anchor or KOMO News Radio. But now, Johnson is sharing a personal story of her own.

Exactly three years ago, Johnson went in for a routine mammogram, and right away - she knew something was wrong.

"I can read people really well because I've been a reporter for a long time," she said. "And before I left that day, I asked [the doctor] - 'So I know you won't tell me anything today because you don't have biopsy results but I can tell by your demeanor...' and I didn't even finish the sentence before he goes 'I'm not usually wrong. I'm 90 percent sure you have breast cancer.'"

Two days later, it was confirmed by the biopsy results. The diagnosis was devastating, but for Johnson and her three children, it couldn't have come at a worse time.

"The reality of it was my ex-husband and I were, that very month, filing for a divorce," she said. "The kids knew that. They had already been in some chaos and upheaval because of that - so do I really want to throw this on everyone now?"

But her kids were intuitive.

"She went and got a biopsy one day and she just came home and went into her room," said her oldest, 16-year-old Jaynie. "She was just crying and obviously I was older so I knew something was up and I went to talk to her about it, and she told us what was wrong."

Johnson decided to get a double mastectomy.

"Just her being so scared...she was tough but it was hard seeing my mom go through something like that," said her youngest, 9-year-old Brooklyn.

Throughout the whole process, Johnson stayed very open with her family about what was going on.

"I don't deal with anything in a grey world," she said. "My kids know - things are black or white and I don't sugarcoat things. I'm an over-sharer as a reporter anyway, so I think I gave them almost too much information off the bat! That was probably a coping mechanism for myself."

Johnson acknowledges that she probably needed the reassurance as much as they did. And when she got the double mastectomy, that was just the start of a long, tough journey. She's had a string of complications, and surgeries.

"All the surgeries," said Brooklyn. "She's had like, seven surgeries! And just having the doctors tell her 'You are going to have this surgery and then its going to be done', and then they are like 'Wait, something else is wrong and you need to have another one.'"

The whole family was frustrated.

"Just seeing her in constant pain, agony all the time," said Jaynie. "She provides everything for us, and to see her - who is the least person on the planet who deserves to be going through something like that - surgery after surgery trying to put on a brave face when I know she's actually scared...it was difficult."

One thing they all could rely on? Humor.

"I kind of get through things with humor, so I think I relied on my humor more than ever," said Johnson. "My family got really used to boob jokes!"

"When I went to the doctor with her once we named her boobs," laugh Brooklyn. "We named them Bob and Steve - that was just the funniest joke I don't know why. It's really stupid, but we would always be like, 'Hows Steve doing today?"

Thanks to humor and a lot of heart, Johnson has good news to report.

"I am cancer free - that's initially all that matters," she said. "I don't have any trace of cancer in my body right now. I'm still in the fight, but I'm stronger than ever."

That's why this weekend's Standup For The Cure party is more important than ever.

"I'm thinking about being in a sea of survivors on Lake Sammamish, standing on that paddleboard - God willing I'm standing - it's emotional for me because it's the first time I've participated as a survivor in something," she said. "But no matter what the walk is for any of us, we need each other because here in Seattle we are right on the cusp - of not only having a breakthrough that will make a difference in someone's life, but whether they got diagnosed in time to save their life."

As for Jayne and Brooklyn, to say they're proud of their mom would be an understatement.

"I'm just so proud of her because even when she's in pain and stuff, she doesn't complain and she's just the funniest, happiest person," said Brooklyn.

"She kicked cancer's ass and she beat it, and I knew she would," agreed Jaynie. "God was telling me the whole time, I knew he wasn't going to take her. I knew it wasn't her time."

The fight isn’t over! Join Carleen, the KOMO 4 team, and other breast cancer survivors at the third annual Stand Up for the Cure on August 24th at Lake Sammamish State Park. Start or join a team now!