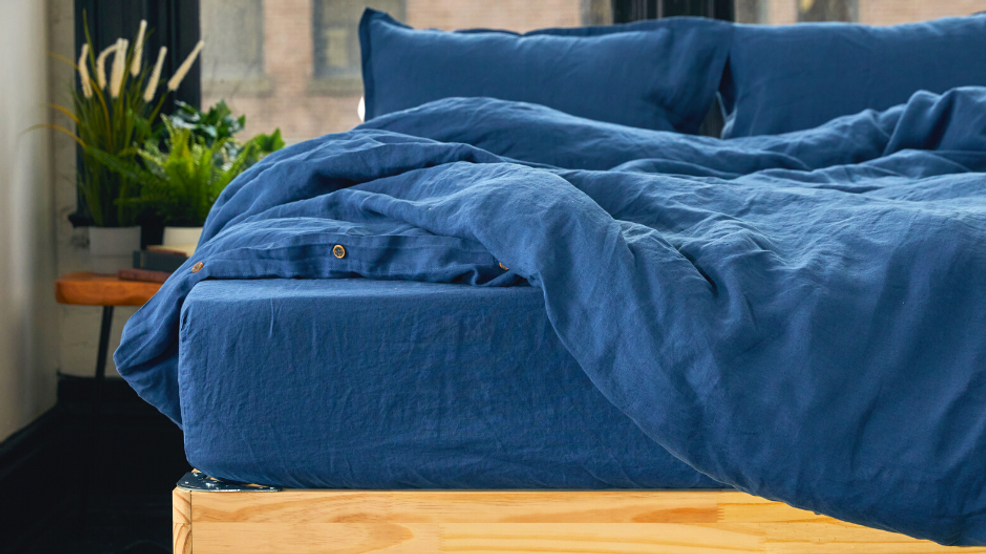 While Americans have happily glommed onto the Danish concept of hygge in recent years, we've perhaps never needed those cozy, comfortable vibes more than we have this past pandemic year.

The philosophy is hardly new, though, for Jacob Andsager, the Seattle-based founder of The Modern Dane, a company that produces ultra-soft, hypoallergenic linens that are "artfully designed, carefully crafted."

Andsager, who grew up in the small town of Broager, Denmark, has now been in the U.S. for 16 years. After spending 10 years in Chicago, a city he loves, he says arriving in the Pacific Northwest “felt like coming home.” Yet after some time, he started to feel that he was losing touch with his own heritage and culture; he wanted to reconnect with the values of home.

"I had the idea of bedding—treating it as a canvas,” he said, adding that these items naturally become an intimate part of our lives, with one-third of one's life spent in bed. He dreamt of nature motifs that would honor where he comes from.

Andsager admits that, at the start, he didn’t know much about textiles. After much research and connecting with various environmental organizations and consortiums, his knowledge grew. “I fell in love with linen,” he said, “head over heels.”

After discovering that Portugal is "the cradle of textiles," he traveled to the beautiful town of Guimarães in 2018. Here he attended a trade show taking place in a magical setting — atop a hill, in an ancient monastery.

Though the trip there took some 36 hours (and involved mishaps like getting stranded in a train station), Andsager found it to be a worthwhile, “incredible journey.” He got the chance to talk to at least 30 manufacturers, and he traveled to factories to oversee fascinating parts of the the process like weaving.

When launching The Modern Dane, he chose to use only OEKO-TEX and certified European Flax linen, "which means that every part of the final product has been tested to meet the highest environmental and toxicological standards." Learn more about what that means here (textile production has been deemed one of the most polluting industries in the world, producing more than 1.3 billion tons of carbon dioxide per year).

When it came to determining the aesthetics, Andsager knew he wanted to utilize the duvet covers' big surfaces, allowing “the beauty of the linen to shine through.”

The exquisite yet simple patterns come from "my own expression of Scandinavian nature," he said. He's worked with international designers and is excited to have discovered Oslo designer Oda Blomnes, who he’ll work with on upcoming additions.

Although the collection is sold across the country, Andsager sees how the brand's nature theme resonates with Pacific Northwesterners. Plus, this region’s history of Scandinavian immigration helps people connect more deeply, too. And even if not explicitly seen in the designs, Andsager feels the the values embedded in Scandinavian culture show up in the way these quality lines have been sustainably, ethically produced — and in the way the company adheres to its values, too.

“It’d been wild," Andsager said. "I had no idea if I could build a business.”

He says that the best part of the process has been connecting with other people, those “feeling passion for linen and what they’re doing.” He's collaborated with talented designers back in Scandinavia, as well as local photographers and content developers here.

In the future, the company will consider selling duvet inserts, yet Andsager wants to be intentional about every step. Whichever material they choose, he wants it to be ethically and humanely harvested.

Andsager is proud of the fact that The Modern Dane works direct-to-consumer, meaning they cut out the middleman and sell much higher-quality products at a lower cost. It also means they can take control of details like delivering items in eco-friendly boxes, and it leads to great relationships with customers as well.

"It’s something we’re very proud of, and want to stick to,” he said, adding the reassurance it brings to trust that their offerings are safe and organic.

Seeing the way the products have been received has brought much joy. Andsager always appreciates getting feedback, especially from those who have happily redesigned entire rooms based on their new bedding.

“I go to bed thinking of the thousands of people sleeping under these linens," Andsager said, “It’s been a thrill.”