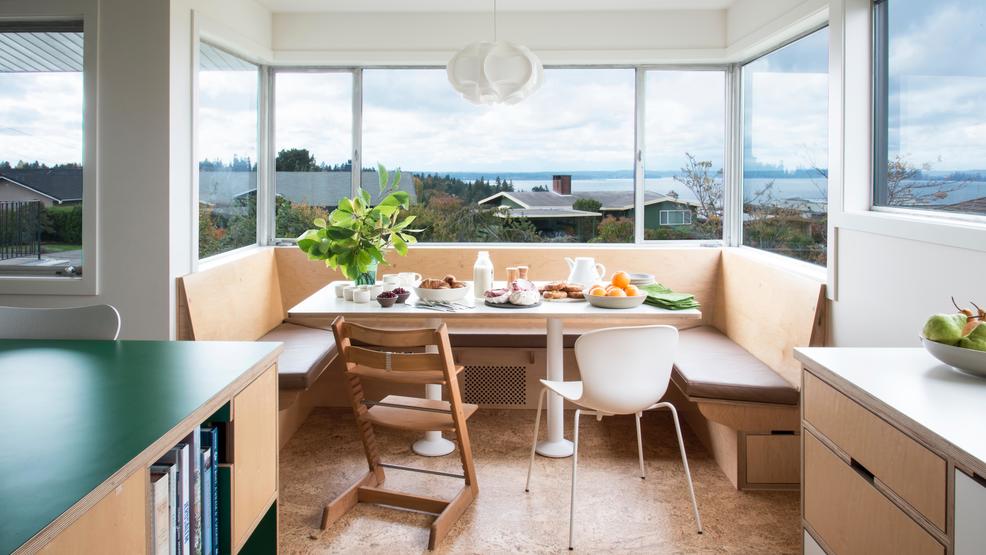 A Ballard family's mid century kitchen got a 60's style update thanks to Andy Beers of Seattle's OreStudios. The space was so stunning that it was featured in HGTV Magazine. (Photo: OreStudios)
SEE MORE

When they found their house in Ballard, Gretchen Jorg and her hubby knew it was the perfect 'Home Sweet Home' for their young family.

"This is a mid-century house, all the houses in this neighborhood are mid-century," explained Jorg. "We are only the second owners, and the house was built in 1958."

The mid-century look, which is a common style for homes in Seattle, really resonated with the couple.

"I really like the open floor plans, a lot of them have circular floor plans," she noted. "They tend to work with family. Some of the older houses are really cramped and the mid-century houses just have a lot more space and a lot more storage."

But the years had taken their toll.

"When we got hold of it - it was not in good shape," recalled Jorg. The kitchen was remodeled in 1980-ish and it needed a lot of work!"

The top priority was tackling that outdated kitchen.

"It was a little galley kitchen and there were pink cabinets if I remember properly and just some super dated appliances," she said. "It was about half the size of the current kitchen."

But the family didn't want to sacrifice any mid-century charm.

"I really wanted to preserve the mid-century style but bring it up to date," said Jorg.

Enter designer Andy Beers from Seattle's OreStudios. Their focus is to create 'beautiful, long-lasting spaces designed with consideration for people and place.'

"I knew we had a big job in front of us," remembered Beers. "It felt so disconnected from the existing house, and the house has such incredible views and beautiful light but none of that was accessible from the current kitchen."

He took a holistic approach.

"I thought the most thoughtful thing to do would be to sort of understand the house - and what it wants to be - instead of working against it," he said. "Really work with it."

The transformation has been so stunning that HGTV Magazine recently featured it in a multi-page spread.

Beers spilled his secrets on creating a 60's style kitchen with a thoroughly modern feel. First up, a sweet spot for meals and more. Beers created a banquette area that practically beckons you to sit there. It allows people to look out a gorgeous ever-changing view of the Puget Sound.

"We love it. This is a favorite spot for the family," he said. The family lost their dining room space during the remodel. "We can squeeze a ton of people around this table and it’s a really comfortable place to hang out on Sunday morning and read the paper - but it's also sees the kids’ daily activity and it’s a great place to sort of have them."

Next up, some amazing cabinetry and a counter top in an unexpected green hue.

"Gretchen wanted a strong color, and when we think color in our region we tend to go outside for inspiration. This color doesn’t feel unnatural with everything we’re seeing out the windows."

The color is special to the homeowners - because it was the color of Jorg's wedding dress.

"It feels period-appropriate, it also feels fun and playful, which is reflective of their personalities."

Then, there's the flooring. The family includes two active youngsters.

"Thinking about the period, cork was a natural fit," said Beers. Plus it's extremely forgiving. "This floor has seen everything and it’s holding up great."

For Jorg, having a magazine-worthy kitchen makeover has been something that she'll always treasure.

"Just to have the keepsake of having those family photos when the kids are so young and in the kitchen that we all designed together with Andy," she smiled.