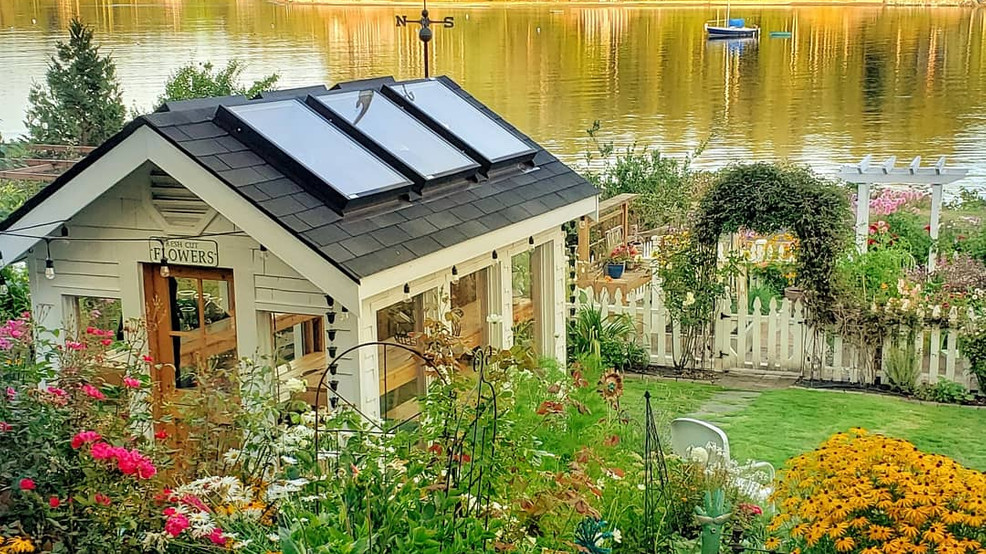 'Shiplap and Shells' in Gig Harbor is a social media sensation

It's always fun getting a peek into someone else's space. From a 1960'a style kitchen remodel in Ballard, to the local family whose yard features statutes of dinosaurs (!) our Refined team loves getting the scoop on unique homes. There's one delightfully historic home and garden in the Gig Harbor area that we discovered that's truly a social media sensation. Owner Kim Robinson recently started sharing photos of her picturesque place on Instagram - and now 'Shiplap and Shells' has a major following!

Seattle Refined: Hey Kim, you are the creative force behind the super popular Instagram account Shiplap and Shells. Tell us about it!
Kim Robinson: My account is about living in a 1920's beach house in the Gig Harbor area. And my home and garden are more of a cottage style. I love mixing vintage with new. I’m not afraid to use color.

Talk about Insta famous (!) - you skyrocketed to 30 thousand followers in about a year - how did that happen?
I really think people fall in love with the charm and the character of an old home. There’s just so much to see and between that and living where I do - really I mean the Puget Sound just being in my front yard.

Describe the greenhouse for us...
It’s a greenhouse that is small, but it’s so adorable what can I say! It’s just enough to plant all your flowers. We didn’t want to have to go through that permit process so it’s only 8x10 - so again, its really tiny but we really tried to add some charm with it as well. And I get a lot of comments about the garden. I think there’s a lot of people who want to learn more about gardening. I was really surprised and I’m not a master gardener by any means - I kinda just fell into it when I moved here and I’m just learning as I go as well.

Tell us about the house, how old is it?
So it just turned 100 this year. My husband and I have been working on it since the day we moved in and we haven’t stopped! It will be eight years in August. It’s only about 1,600 square feet.

Talking about some of the big projects you have done - tell me about the kitchen before and after?
The kitchen before was Formica linoleum floors - some really old tile it was really grungy it was probably from the 70’s. We found a farmhouse sink we fell in love with. And we actually started the whole process with that farmhouse sink and we built the kitchen around it. So that was really really fun. We added subway tile and the tongue and groove ceiling, added a butcher block top to the dresser and made an island. We have this little tiny dresser in the middle of the kitchen, but it works for us! We also added window seats to the kitchen because we had very little eating space.

How does that kitchen feel know when you’re sitting in there with your morning coffee?
Oh it’s gorgeous, I’m looking at the water and the greenhouse every morning

How big is your bedroom and what is the creative and cute way you managed to incorporate the history of the house into it?
Let me just say this - my bedroom is so small that my king size bed is about the only thing I can fit in there! I can’t put very much furniture in there at all so we have actually taken a cabinet, which was built the same time as the house was, and we built it into the wall when we were doing other renovation. We also have another built in on the other side and the idea was to be really creative we decided to do a faux mantle on the foot of the other side of the bed.

Do you have a tip [or two] for those of us at home where we can kind of incorporate that 'Shiplap and Shells' charm into our own homes?
There are a couple things I like to do when summer comes. The first thing is bringing the garden inside the house. The other thing would be bring some color in whether it’s adding some pillows or a rug, just bringing in pops of color just to - give it that summer feel.