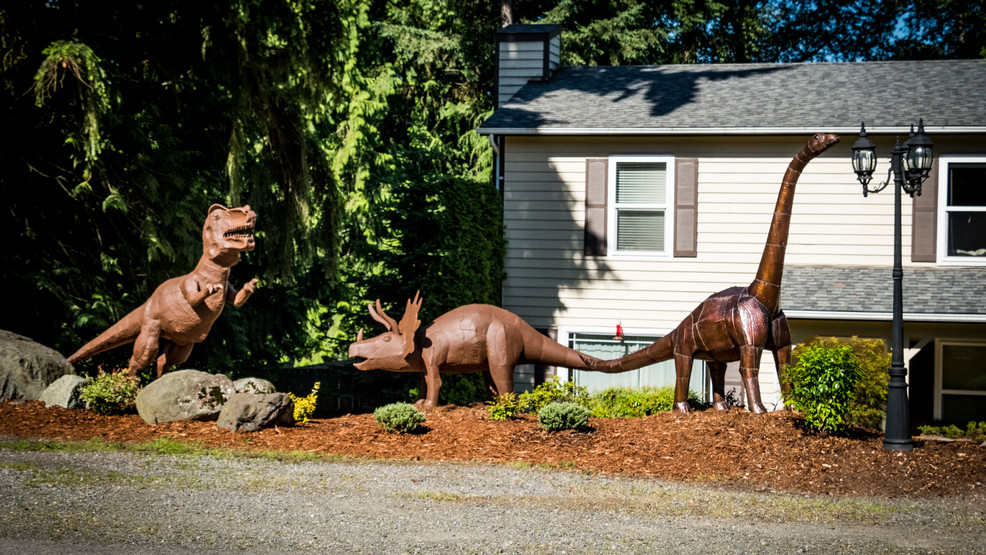 Gnomes, plastic flamingos and fake-concrete-deer pale in comparison to the creatures we found roaming around Nathan and Cara's yard in the South Sound.

"We got a tyrannosaurus, triceratops and a brontosaurus," Nathan said.

Don't worry! They're not real dinosaurs. The trio of huge pre-historic reptiles are artistically crafted from sheet metal — dozens of tiny pieces, welded together to form three fantastic dinosaur figures. Cara said she and her husband were traveling in Oregon when they spotted them.

It was love at first sight.

After meeting Nathan and Cara, the dinosaurs migrated from the art dealer in Oregon to their new home on Cara and Nathan's front lawn — becoming an instant neighborhood landmark.

Nathan's fascination with dinosaurs started at an early age. He started collecting dinosaur toys, then dinosaur fossils and now huge outdoor dinosaur statues. It's a family affair with his wife and their soon-to-be-born daughter.

"We hope that she loves dinosaurs just as much as we do. Her nursery, the theme is princess dinosaur," Cara said.

For this fossil loving family, the front lawn is an expression of their personality and will continue to evolve.

"Its a work in progress," Nathan said. "We might have other dinosaurs later on. We planted some new bushes and trees...that plant will be anywhere from seven to nine feet tall, so it will look like the brontosaurus is eating it."