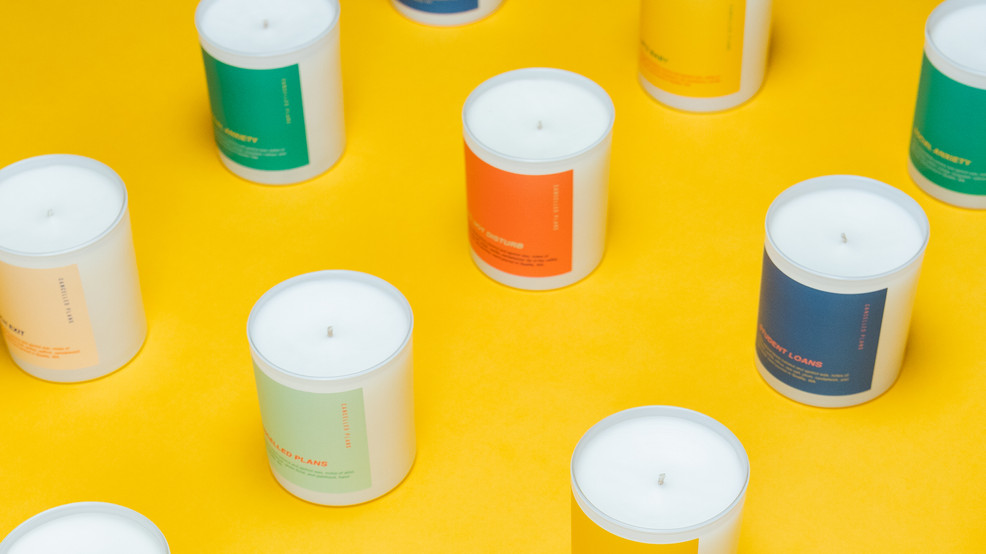 Cancelled plans — for a lot of folks, nothing feels more timely right now. One local company is trying to capture those feelings in the form of candles.

"We had no idea this was coming. It just happens to be the most relatable brand of this year," said Spencer Findlay, co-founder of Cancelled Plans. "It really comes from our love of slow nights in and cancelled plans. Just being in on a Friday night and enjoying a slow night in with a glass of wine."

"It's just everything we represent," added Kenzie Findlay, while discussing the name of the business. "Like the joy of missing out, having social anxiety, being introverts, just things that hit home."

Spencer and Kenzie, both graphic designers, met on their first day of college and got married soon after graduating. Then, they set about creating a company around candles.

"We're designers first, so we built the whole brand and the design of the company first," said Spencer.

"Honestly, one night we came up with [the idea], branded it, and had the whole color scheme and everything," added Kenzie.

They may have had the look locked in, but there was one "minor" problem — Spencer and Kenzie didn't know how to make candles.

"The very first candles we poured, we were making them on pancake griddles," said Kenzie. "We were like 'they're going to be amazing!' We had very high hopes for these candles, and they turned out really beautiful. We were like, 'we're candle makers now!'"

Excited they sent photos to their family, and lit one to test it out.

"Then we burned one, and it went straight down the middle. It was horrible. It didn't smell. That was the moment we knew it was going to be a long road," she said.

The pair turned the kitchen of their Seattle apartment into an R&D studio, mixing and melting for more than a month until they had created the perfect candle. They officially launched Cancelled Plans in October 2019, and just three weeks in received an email from a buyer at Nordstrom.

"They were looking to bring us into the Holiday Pop-In shop for the holiday season," said Spencer. "We immediately said yes and that we could take it on."

"The first email [asked for] a hundred candles. We're like 'Yeah, amazing. We have three weeks. That's easy. We'll just whip those up'. Then a day later they're like 'Actually we need 600. Do you have those in stock?' We had zero in stock. We were making them as we got orders. We were so unprepared. So that was wild. It was fun," said Kenzie.

The Findlays filled the order, and their business has only grown from there. Now, Cancelled Plans candles are available directly from their website, in some 40 boutiques across the country and recently launched on Urban Outfitters online. While they've upgraded their equipment, Spencer and Kenzie are still pouring each candle by hand, and developing new ones, always starting with a name, then creating a scent to match.

"We're always talking about ideas; different funny things that come to our minds. When we say it out loud, and both of us laugh, that's how we know that's going to be a funny candle," said Kenzie. "Then we'll go along with the scents from there. So for our 'Introvert' candle, we knew that had to be peaceful, calm, warm tones. Our 'Extrovert' candle is loud and super fruity. It has a bold scent."

Whether you're a "90's Baby," dealing with some "Social Anxiety" or a fan of a good ol' fashioned "French Exit," it's a good bet Cancelled Plans has a candle that captures a little piece of who you are.

"We want [our candles] to make people smile. We want it to be a conversation starter when it's burning on your coffee table," said Kenzie.

"It's something that's fun. It's a pop of color on someone's counter," added Spencer. "[We hope] someone feels proud of it and that when the candle burns, it fills the room with an amazing scent."