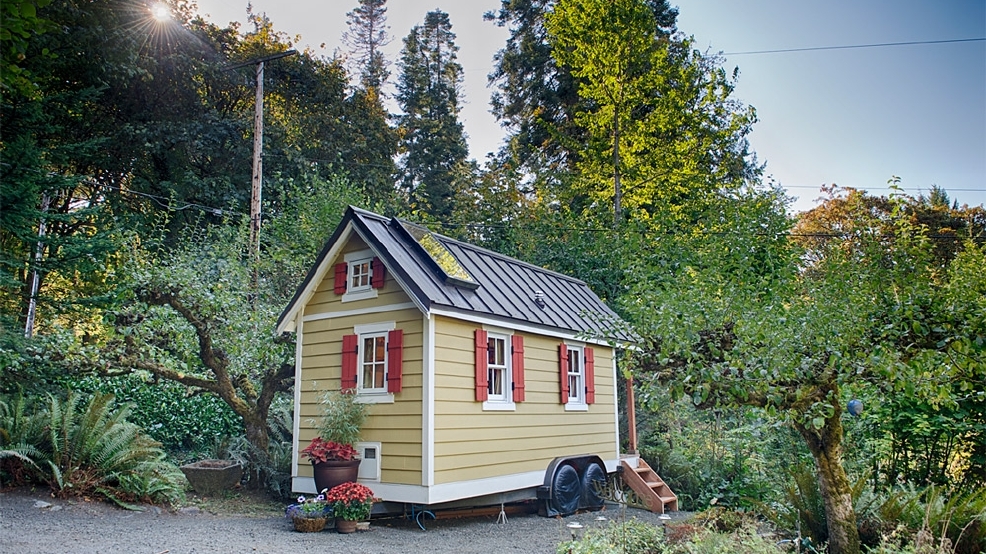 Are you ready for tiny house living?

As you guys know, I'm obsessed with decluttering my space - even though it's been happening in my head much more often than in our actual apartment these days. One day, rather than bid items that have served their purpose a fond farewell, I decided to watch the documentary about "tiny house" living called, appropriately, TINY.
Are you familiar with the tiny house movement? Basically it comes down to sacrificing square footage for freedom. Some of the benefits that Tiny Housers endorse are saving cash (both on the structure itself and paying to heat, cool, and live in it), working less (paring down to just the necessary physical belongings rather than striving for more stuff allows you to spend more time and energy on relationships and personal pursuits), and leaving a smaller environmental footprint.
Curious to know more from people who are actually living the life, I interviewed Chris and Malissa Tack who embrace tiny house living in Snohomish, WA and asked them what led them to living in their tiny house.
"One of the biggest pushes to living tiny came to us after realizing how much money we had spent on renting an apartment for the last ten years. We had spent over $36,000 in two years, living in New York alone," Malissa said.
The couple had been progressively downsizing their apartment square footage and their personal belongings with each new move, so the final move into their tiny house wasn't as huge of a jump.
"We really wanted a place to call home, but were startled by the price of housing. We also didn't want to buy into a large house, one that would be much more than we needed. A tiny house gave us the home we were looking for and the flexibility to move it with us, instead of constantly trying to find something to rent."
Of course living tiny doesn't come without it's challenges, like finding a place for everything that's left once you've donated, sold, or given away the rest.
"We still find ourselves discovering items that we thought we would use more, but are just collecting dust. It's a process, one that can not be done overnight. We also find ourselves informing friends and family that we are no longer accepting physical gifts, but rather experiences," Malissa said. "We do a lot more traveling to see friends and family and also more exploring than we used to. We aren't tied down with a heavy workload to sustain a lifestyle that didn't meet our needs. Instead we have more time and freedom to do what we really want, and can help out friends and family more."
While you might assume that living in tight quarters could put a strain on your relationship, the Tacks found the opposite to be true.
"Our appreciation for each other has been the best part of living in a tiny house. Because it's such a small house, you respect each other's space, as well as work better as a team. Please and thank you are common words used in this house. We always team up when we have to take the trash out, wash the dishes or clean the kitty litter," Malissa said. "Our relationship has grown so much since being in our tiny house. When conflict arrises, we can't just run to another room and avoid the issues. We work out our problems and communicate so much better in a small space."
If you're curious about tiny house living but not ready to make the jump, you can test it out for yourself at The Bayside Bungalow located on the waterfront in Olympia. Brittany Yunker rents her former 165 square foot tiny home out on Airbnb. While she no longer lives there, Brittany misses the "simplicity, never-losing-your-things uncluttered and unfettered lifestyle."
Brittany said that she learned so much during the years that she lived in her tiny house.
"It's not about the quantity or size of things that you own, it's about quality. Quality belongings last much longer and don't end up in the waste stream after two uses. I learned that I was happier with less, and still am to this day. I have seen so many of my friends work and work to pay the bills for the countless "things" they want to own, and I have come to realize that I'm perfectly content working less, having less, and living more freely."