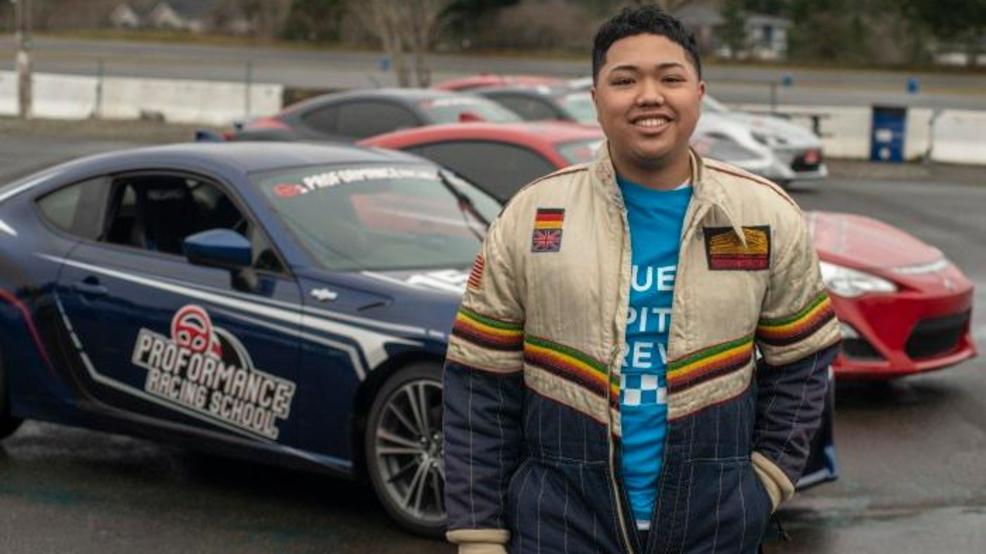 <p>Cruising around town with his friends in his champagne-colored Honda was one of Miguel’s favorite things to do. That changed the day Miguel was diagnosed with osteosarcoma, a rare and aggressive form of cancer. (Photo provided by Seattle Children's)</p>
SEE MORE

With cancer in the rearview mirror, Miguel races full speed ahead

Miguel Navarro is finally getting back to doing what he loves most: driving.

"Driving has always been an escape for me," said Miguel. "It's where I feel most at home. When you're driving, you forget everything else around you."

When he was first diagnosed with cancer, Miguel was told he may never be able to drive again. It was a reality he couldn't comprehend or accept.

"I knew I'd drive again," said Miguel. "I always knew I'd get through this."

He promised himself he'd get behind the wheel again, and recently, he realized that dream in a special way, thanks to Seattle Children's.

In the grandstands of Pacific Raceways, Miguel's family, along with his care team, beamed with pride at the sight of Miguel zooming around the race track. Adorning t-shirts that read, "Miguel's Pit Crew," they cheered him on.

Not long ago, they were supporting him by his bedside, through one of the toughest battles of his life.

Today, cancer is in his rearview mirror and he's taken back the wheel.

"I couldn't have imagined I'd be here today," said Miguel. "There are times I look back and think, 'Did that really happen? Did I really have cancer?' You have to take each day as it comes. Keep believing and keep moving forward."

Cruising around town with his friends in his champagne-colored Honda was one of Miguel's favorite things to do. The roar of the engine, the boom of the speakers and the feel of the clutch shifting was where he felt happiest.

That changed the day Miguel was diagnosed with osteosarcoma, a rare and aggressive form of cancer. The tumor was located in his right shoulder, the same arm he uses to shift gears. Just like that, his ability to drive was ripped away.

"It was like a piece of me had been taken away," said Miguel.

Miguel was in the middle of his senior year of high school. As his friends headed back to school after winter break in January 2018, Miguel was checking into Seattle Children's Cancer Care Unit. He told himself he was going to get through this.

A new shoulder, a long road to recovery

Miguel's road to recovery began with chemotherapy. After 10 initial rounds, his care team prepared for an invasive and one-of-a-kind surgery.

Before going into the operating room, Miguel told Dr. Matthew Thompson, an orthopedic oncologist in the Bone Tumor and Sarcoma Clinic, about his goal to drive again. Thompson told Miguel, he'd do everything he could to make that possible.

"I thought that was a realistic goal, and we chose a reconstruction that would give him the best shot at driving again," said Thompson.

In the operating room, Thompson had to remove the tumor and, using a custom implant, reconstruct a new shoulder for Miguel. The surgery was successful, but due to its complexity, his doctors didn't know how much mobility Miguel would be able to regain in his arm.

After the surgery, Miguel needed another 10 rounds of chemotherapy, and then the race to getting back behind the wheel was on.

Getting back on track

Elizabeth (Beth) Clark, Miguel's outpatient occupational therapist, first met him in August 2018. From day one, they hit it off.

"He's a light," said Clark. "Every day, he greets you with a fist bump and says, 'What up, boss?' He never says no and is always game for more therapy. You almost feel like a better person by just knowing him."

Miguel's rehabilitation was a slow and tedious process, but his positive attitude and determination pushed him through the hard times. He started by relearning how to do simple, everyday tasks like tying a shoe.

"I've worked with other patients who have been through intense surgeries, but this one was above and beyond what we'd seen before," said Clark. "It was uncharted territory. We didn't know what we could or could not get back."

As months went on, Miguel's care team kept his goal front-and-center during his rehabilitation. To help motivate him, they even brought in an immersive racing game, Forza Motorsport 7, so he could practice shifting gears as he regained his strength. Without physically being in a car, he could realistically imagine himself behind the wheel.

Nearly six months later, Miguel was gearing up to accomplish his goal.

"In my mind, I thought it would be at least a year before he'd be able to try to drive again, but he was determined," said Clark.

And that determination paid off. To celebrate Miguel reaching his goal, Seattle Children's put together a special event with the help of his care team.

He was surprised with a once in a lifetime experience to be a race car driver for a day at ProFormace Racing School. When he arrived to what he thought was going to be a speaking event as an It Starts With Yes Patient Ambassador, he was shocked to instead be greeted by Don Kitch Jr., a professional race car driver and president of the Team Seattle Guild. Since 1997, Team Seattle has raised more than $5 million for Seattle Children's, and Kitch jumped at the opportunity to be a part of Miguel's big day.

"I hear you want to be a race car driver," said Kitch enthusiastically.

A big smile blossomed over Miguel's face as he laughed in disbelief. The speech he had prepared was clutched in his hand, but it turned out he wasn't going to need it after all.

Miguel greets Dr. Thompson, his surgeon, with a fist bump and smile.

"No way!" Miguel said looking at the cars with excitement. "I can't believe this is happening."

Kitch led Miguel over to a row of race cars. "Pick a car," he said.

The row of gleaming race cars was everything Miguel had imagined when he practiced shifting gears during his rehabilitation. Now, it was a reality. He selected the shiny blue Scion.

The surprises weren't quite over for Miguel. Once the car was picked, Thompson and Clark from his care team descended the stairs of the racing school, with beaming smiles and open arms. They had seen firsthand how far he had come, and they didn't want to miss this moment.

"His positive attitude has gotten him through a really tough time," said Thompson. "To see Miguel back in his environment, doing something he loves, is so exciting. I'm very proud of him."

After completing a few practice laps and getting a feel for the race course, Kitch got behind the wheel of another race car. It was time to race!

A pace car led the two vehicles once around the track. As they approached the starting line, their engines roared, and they took off. Two laps down, Kitch and Miguel rounded the last curve and headed into the final straightaway. Miguel inched ahead by half a car length. The checkered flag billowed in the wind and cheers erupted.

"This experience was amazing," said Miguel. "I have no words."

As Miguel celebrates his victory, he also has a message for others who may face a battle of their own – keep fighting.

"Better days are coming," he said with a big smile. "I'm proof it's possible. After all, I'm here living my best life possible."

It Starts With Yes is a $1 billion initiative with a bold vision to transform children's health. With your help, Seattle Children's will continue to provide financial assistance for families in need; expand necessary healthcare and research facilities; and invest in clinical and research programs to advance pediatric medicine. Give today to help support kids like Miguel and transform childhood health for generations to come.