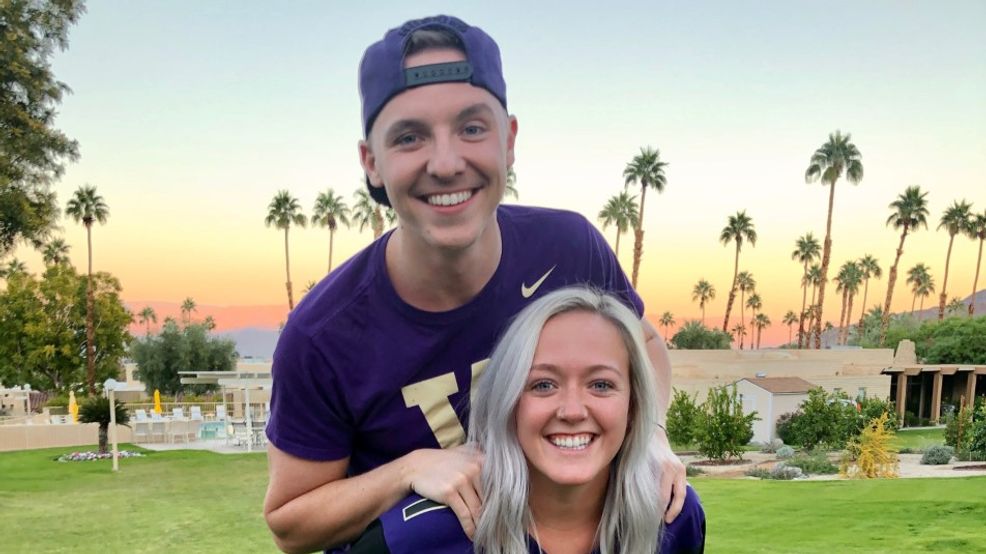 May is usually a special month for me.

First of all, it’s my birthday month (#TaurusSzn), the weather in Seattle is starting to shine like the diamond it is, and it’s [usually]the freakin’ premiere of "The Bachelorette" baby.

Sure, "The Bachelor" premiere is fun, but "The Bachelorette" signals us moving into the summer months as well as allowing us to ogle 30 eligible bachelors from the comfort of our own couches every Monday evening for the next three months...ladies, don't it feel good to have the tables turned?!

But, as we all well know, COVID-19 showed up to the party, and Clare Crawley’s season of "The Bachelorette" has been postponed in order to protect everyone's health.

Dang flabbit! Understandable, but still - DANG FLABBIT! Who am I going to watch go on dates and meet Hottie McHottersons from the comfort of my own living room?!?!

OH, I KNOW. Megan Gettis! Who is Megan Gettis, you’re probably wondering? Only just the most genius of geniuses I’ve ever known. Megan, 23 and her brother Ian, 26, are siblings and roommates, living together in Seattle when a fateful quarantine Zoom call led to one of the greatest ideas of all time.

“Ian and I were on a Zoom call with our high school friend, Shelby, who lives in Nashville and recently got engaged," said Megan. "We were catching up on our lives and she asked about our recent dating lives. I told her it’s pretty hard to be dating during a time like this and she proposed the idea of doing video chat dating. Then her and my brother thought it would be great to do something similar to 'The Bachelorette' and have a bunch of guys [on a call] and make a whole production of this thing.”

Cue, “Zoom Bachelorette,” an IGTV Instagram special, where Megan curated a group of local gentleman from Hinge, Bumble and Tinder to make a quarantine dating special for Bachelor fans/her friends and family who just want some good ole, down home, entertainment.

Ian, a very creative individual who owns his own handcrafted furniture line, jumped all over the idea, becoming the content creator, producer and host extraordinaire for this virtual dating special — basically, the Seattle version of Chris Harrison. He’s no stranger to creating digital content as he made YouTube videos with his friends growing up.

“As we told more and more of our friends about the whole thing, I thought I’d take it one step further and make a few promo pictures and [videos],” said Ian. “I love finding outlets to use my creativity, but my sister thinks I’m crazy for the amount of time I’ve put into creating content for this. What else is there to do during quarantine?”

The two siblings are fans of the ABC franchise, and were looking forward to the next season, before its postponement.

“[We] started watching 'The Bachelorette' on Becca’s season because my neighbors were putting on a weekly rosé tasting with every episode. [We called it] #WYATR, Will You Accept This Rosé,” said Ian.

And the rest was history. The two, like the rest of us, became indoctrinated members of #BachelorNation.

Now it’s Megan who will be added to the list in a one night special never-before-seen episode, unlike anything you’ve ever seen, with the most DRAMATIC twist you never saw coming, "Zoom Bachelorette," featuring Megan and 10 eligible Bachelors who are on a mission to find love.

“I will be hosting and Megan will be doing 10 minute dates with each of the guys. This is not going to be live, we’re going to film it and edit out the awkward or boring scenes,” explained Ian. “Everything will be a one-on-one, and then at the end of each date she’ll decide to give them a Tulip or not. In the episode that’s posted, the Tulips will all be given out at the end and she’ll decide if she wants to go on another date with him.”

The two put their own spin on the series, adding tulips as their flower of choice and emblem of a budding romance, pun intended.

“I plan on being in the background of a few of her calls and whispering some things over the screen, like the producers, and giving her ideas while she’s on the call,” said Ian. “I also plan on being like Wells and making that girl cocktails while she’s doing these one-on-ones.”

And the drinks are welcome, because the nerves are real, kind of like the show, right?

“I’m excited to meet new people, but I am extremely nervous about this whole thing,” explained Megan. “I don’t date much but am looking to get out of my comfort zone and try something new. Plus I feel like there’s less pressure dating through a video screen. If the date got really awkward I could just say goodbye and hang up rather than have to come up with an excuse. That’s not my main concern though, most of these guys look super fun and if anything this is a great story!”

Then, and potentially the most fun part...casting.

Megan, usually not a fan on dating apps, had to swallow her pride to search for her knights in shining armor to join her on her Zoom journey. After adding a bio in her dating apps letting her potential dates know what was going down, she got some bites.

“I had a few guys respond excited about the whole thing, the ones that know how 'The Bachelor' works were definitely interested in being a part of it. I had a handful of guys who thought I was throwing a Bachelorette party on Zoom and was inviting random guys to it,” said Megan. “Several asked if I was getting married and why I was on dating apps. After I posted the promo video, it got shared on reddit and [some] had replied to the thread asking to be a part of it.”

The real question: is Megan really here for the right reasons or is this the product of extreme quarantine boredom and a creative outlet for her and her brother?

“This idea came from my friends, and they ran with it. I’m not sure I’m going to find something serious out of this but honestly, you never know! I could really have a good connection with one or more of these guys and there could be something there,” said Megan. “If a serious relationship doesn’t happen, I’ll [at least] come out with more friends!”

The guy would have to be pretty special to actually (and virtually) sweep Megan off her feet.

“I’m looking for a guy who’s pretty outgoing, as I’m not the most outgoing person, [I need] someone to balance my personality. Also I want them to have emotional intelligence because that’s hard to find with some men out there,” she said.

And adding more jobs to busy Ian’s list, not only is he the host, producer, content creator, but his most important job yet — his sister’s biggest fan and supporter.

“I’d want someone who is easygoing and can hang with anyone. Someone who has a great sense of humor and can find the fine line between fun and seriousness,” said Ian. “She’s my best friend and whoever she ends up with needs to treat her like a queen. I’m going to let Megan take the reins of who she chooses in the end, but if it’s someone I didn’t find interested in her for the right reasons you know I’m going to tell her that.”

Currently, the Zoom Bachelorette episode is a one-off but who knows? Maybe after filming it could turn into a mini-series, a parody of the show.

“If I’m interested in any of the guys, I’ll definitely follow up with the men I give tulips to. Who knows what the future holds though, my friends will definitely want more after this is done,” said Megan.

As for Ian, he’s happy to sit on the sidelines and help his sister on her journey to find love.

“Megan thinks I’ve gone way too far with this but I’m having a blast pimping my sister out as an eligible bachelorette. She’s been single for nearly three years and hates dating. I’ve been trying to make her get out there and date so this is the perfect opportunity for her. She’s pretty shy but so much fun once you get to know her so I hope the guys can see that through the video chat,” he said.

I guess that leaves us with one question...who will accept the final tulip?

You can watch the Zoom Bachelorette episode on Saturday, April 25, at 5 p.m. on Megan’s Instagram account on IGTV @mcgettis.

Here's a little sneak peek of the cast!

Megan lives in Seattle, Washington, and grew up with her older siblings Jordan and Ian. When she’s not slaying coffee as a barista during her weekday mornings she’s spending time with her close friends and family. She has a niece and nephew who light up her days when she’s able to spend time with them. During quarantine, Megan has become an avid cook and enjoys a well-made Chrissy Teigen recipe. Her lifestyle is always on the go, and she's looking for a guy who shares the same active lifestyle.

Zach was born into and raised by a royal family deep within the heart of the African plains. His purpose in life was to always succeed his father, Mufasa, as King of the Pride Lands; however, after his uncle Scar murdered his dad, Zach was manipulated into thinking he was responsible and fled into exile. After growing up in the company of the carefree outcasts (Timon and Pumbaa), Zach eventually received valuable perspectives from his childhood friend, Nala, and his shaman, Rafiki, before returning to challenge his uncle to end his tyranny and take his place in the Circle of Life as the rightful King.

*Note: Refined was unable to verify any of Zach's self-reported background

Tom is a law student at the University of Michigan but is living in Seattle until September. Tom was born in raised in Seattle and is constantly getting told he is too loud. He loves natural wines and playing pick-up basketball. His aspirations in life are to be like the bartender Wells from "Bachelor in Paradise."

Currently living in San Francisco, California, Mark is working his CPA to achieve his long term goals in finance. When he's not working he loves to dance and see live music. He's an avid runner and enjoys yoga. He loves his dog, baking cookies (mostly eating them) and is always seeking adventure and a partner who he can travel the world with.

Originally from California, Adam has lived in Seattle for four years with no intention of leaving any time soon. During his free time you’ll find him at a concert or trying out new food and drinks some place in the city. Lately, his hobbies include reading, home bartending, making the perfect playlist and admiring people's dogs from a safe distance.