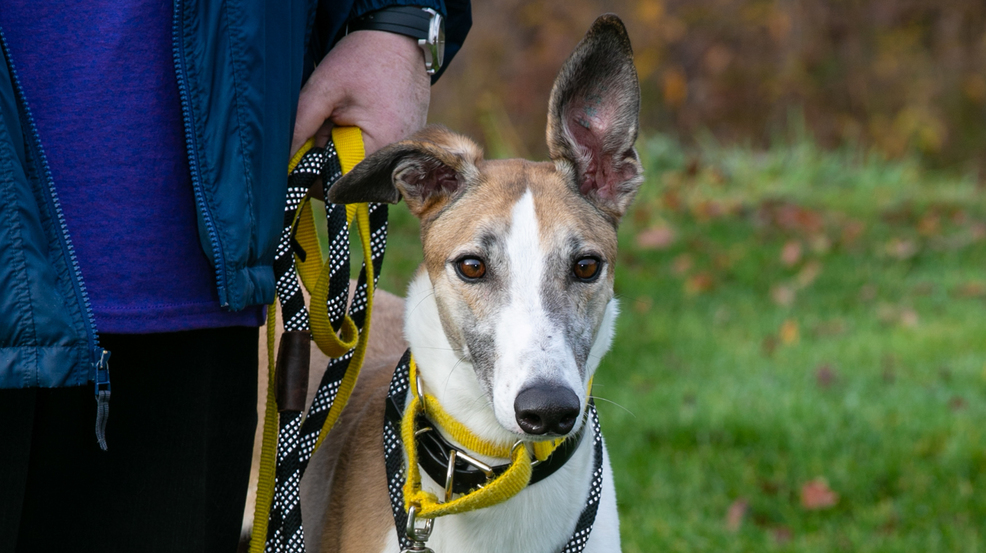 Why Not Me: Let's Find Troy a Home

Troy, Troy - the sweetest boy! This 3-year-old greyhound has been at Greyhound Pets Inc. (GPI) for little over a year, who didn't really know how to be a pet and wasn't sure how he felt about people.

He was injured during his racing career in Florida, and the residual soreness in his spine and back legs means he doesn't like being manhandled, or people being overly physical with him (GPI recommends a future home not have kids who may not understand doggy cues).

All this to say he DOES like interaction and attention, he just wanted to be the one to initiate.

"He wants to please you," said Martha Faulkner from GPI. "He just doesn't want to be in pain."

He's on a couple meds for pain and anxiety, and has a fear of loud noises. GPI is making huge strides (greyhound pun intended) in this department, training him to get a little desensitized to having his back and hind legs touched. Troy now gives very clear cues when he is feeling uncomfortable.

"We just let him initiate and then he learned, 'You know? Touch isn't so bad!'" said Faulkner.

An idea family for him would be a dog savvy one, who can read these cues or someone who is willing to learn - and GPI will also throw in a free training session and special martingale collar and car ramp so he can continue making more progress with his sensitivity.

Troy can run and play like a normal dog, but he should use the ramp to get in and out of the car so he doesn’t re injure himself. He already knows how to use his ramp and he hops right down it when it’s time to go on a walk.

He has a very sensitive and gentle soul, and like many greyhounds he leans on people to show them he loves them. If you’re extra special you may get a kiss or two!

Troy is hoping to live somewhere quiet (and cat-less!) so he doesn’t have to be anxious about loud noises in his house, and somewhere with a fenced in yard where he can romp around. He has done well with lots of greyhounds at GPI and would likely appreciate another large breed dog in the home, especially if they are gentle and confident.

Basically, Troy is looking for a home that is as gentle and sweet as he is, and people who are patient and knowledgeable as he continues to learn how to be a pet rather than a racer.