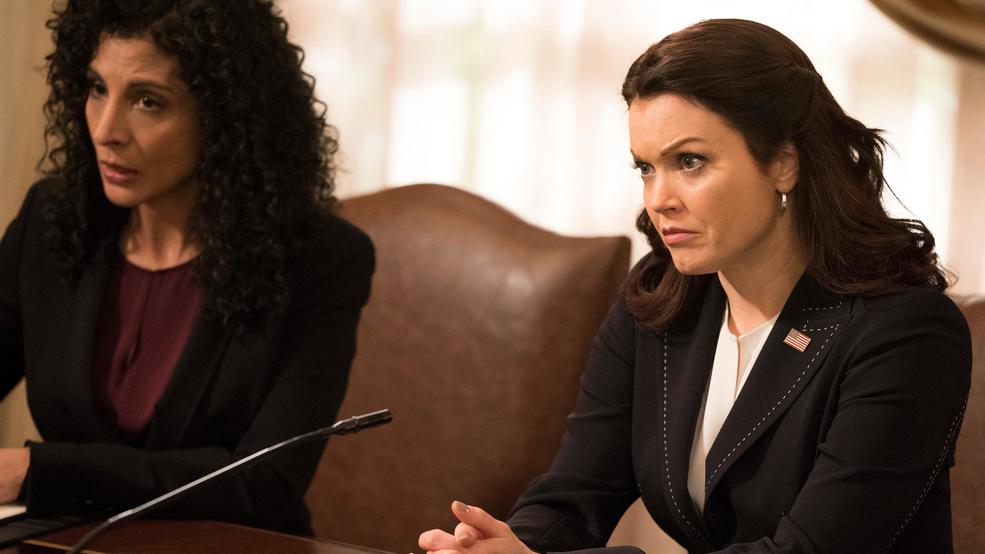 Fans will weep. Drama will unfold. We're guessing someone will die, Olivia Pope will drink red wine, and Mellie Grant will have at least one impressive monologue.

And speaking of Mellie, we got the chance to chat with the actress who plays Madame President herself, Bellamy Young ahead of the big night.

Quick Note: I am super duper biased when it comes to 'Scandal'. I've watched since day one, coveted Olivia's outfits, researched how much those wine glasses actually are ($13 each btw) and have a huge girl crush on Mellie herself. So needless to say I could have spent the entire four minutes we're given to talk to Young just GUSHING and tripping over my words.

Thankfully, I decided to ask gladiators on the interwebs what they most wanted to know from Young, instead. Thanks to everyone who wrote in questions, and if I missed yours - apologies! Again, I only had four minutes...

Bellamy Young: "I agree with people, I'm wrecked about it too. I can't believe it. We love these jobs. It's just, Shonda knew in her heart where the story ended, and now we've come to that point. So sad."

Young: "It was crazy because we were in D.C. shooting the second-to-last episode and we couldn't figure out what was going to happen! We knew she [Shonda] only had 42 minutes of story left, and we just all wanted to live! But we couldn't imagine how it was going to go, and we sat down for the table read - and, you know, we sit at table reads like we sit with everyone on Thursday night because that's where we find all the information, and we know nothing going in - and...it was so satisfying."

"It's as hilarious as it is heartbreaking, it's jaw-dropping, it's conversation moving - she just is a once in a lifetime story-teller and she pulled that little boat right into port impeccably. Everybody that does survive -AHH! - will live on forever vecause she serves the paths that they were on so, with such integrity and dignity. And, oh I love it. I hope you'll love it too."

Young: "Yeah, I am. I am. There's some wiggle room there we can talk about afterwards, but yeah."

Young: "Great question! Play the long game. But I feel like Mellie already knew that! That's something Season 7 Mellie would have to tell Season 1 Bellamy, do you know what I'm saying? I'm always impressed by Mellie, even when she'd fall on her face she'd stand up and walk straight forward towards the fight. And just by her relentless faith in herself, and her commitment to her dreams, got there. But yeah - yeah - yeah! That's a great question."

Young: "I did! I got the suit I wore when they deposed me, two episodes ago. I bought this ring, which is a ring like the one Mellie wore on the show, but I had to buy it from Tiffany myself. I took a presidential pen, because I want to write with a presidential pen for the rest of my days. Like, little things. A little tray from my oval office. Small things - but, memories - you know?"

Young: "I mean, everything is the actual honest answer. But you know - spending my time with this open-hearted, hard-working, loving bunch of people. Also getting scripts that - if I got one of them a lifetime and did it for two years on Broadway - I'd say 'Job of a lifetime!' But they came every week at us, so beautiful. And then, you know, I got to share them with these wonderful people."

Young: "None of us would be here, we wouldn't have gotten a second season without our Gladiators. So, I'm going to miss that. Kerry was smart enough to see that live-tweeting was the future, and people came, and because of that groundswell, ABC gave us a chance for a second season. And then we really caught fire. So all these Thursday nights that we spent with people around the world - in such a personal way, I will miss that. That's been really special. this whole family."

Tune in tonight on KOMO 4 to see the final episode of Scandal. Over a cliff, Gladiators, over a cliff!