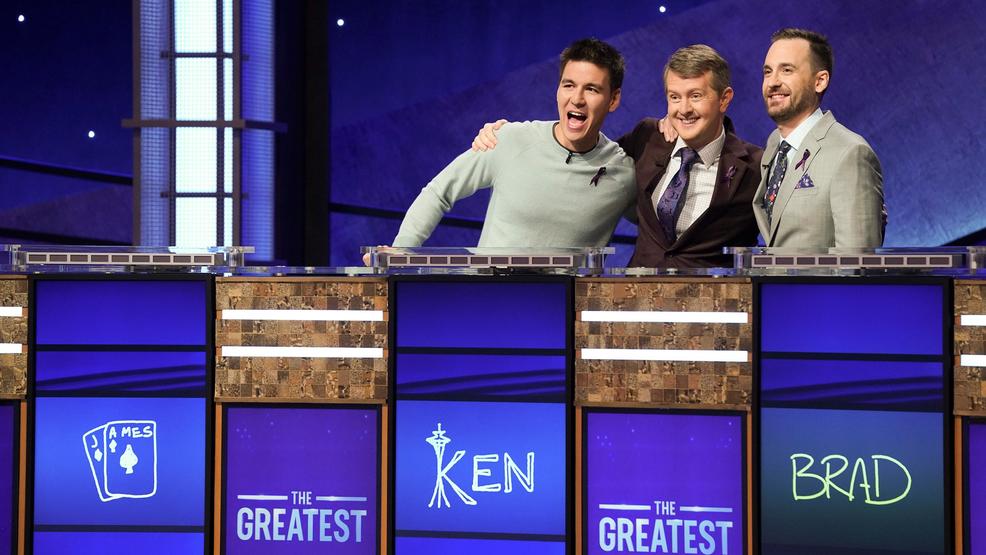 On the heels of the iconic Tournament of Champions, "JEOPARDY!" is coming to ABC in a multiple consecutive night event with "The Greatest of All Time," premiering TUESDAY, JAN. 7 (8:00-9:00 p.m. EST), on ABC. (ABC/Eric McCandless)
SEE MORE

'I can still play this game' - Ken Jennings preps for the ultimate 'Jeopardy!' showdown

They're the three highest money winners in "Jeopardy!" history, and on January 7, 2020 - they'll be competing against each other in the show's 'Greatest Of All Time' (G.O.A.T.) challenge, in front of America. The multiple night series, hosted by Alex Trebek of course, will consist of multiple matches. The first to win three, receives $1 million and the title of 'JEOPARDY!' G.O.A.T. Runners up will each receive $250,000.

When we heard the news, we ran straight to our old friend and local legend, Ken Jennings, to see how he was prepping for the big challenge. Little did we know when we were talking to him about "Life After Jeopardy!" in 2018, that they show wasn't quite done with him yet!

"I've known about this [G.O.A.T. competition] for months, but was sworn to secrecy," said Jennings, who became a household name after his record 74-game winning streak. His winnings total $3,370,700. "I couldn't have been more excited when I heard about it."

While a player himself, beneath it all - Jennings is just a big fan of the show too.

Turns out, he wasn't alone. Social media has been blowing up since Jennings' run, with appeals to the show to do a showdown.

"Hundreds of people online started saying 'When are they going to do the big showdown! We have to get Ken and Brad back to play James!" he said. "The 500th time I heard it, I thought, "Jeopardy!" probably is hearing this too, they are no dummies. They know if this is what the people want."

And gosh darn it all, let's give the people what they want! And let's give it to them in primetime....

"It is very exciting," said Jennings. "They haven't done a primetime show for almost 30 years, so it's very exciting to me that I will be one of these faces on this rare primetime curtain for 'Jeopardy!'"

But while we're celebrating the holidays and ringing in 2020 with our families, Jennings is getting right to work.

"The best way to prepare for this tournament is [to] watch a lot of 'Jeopardy!'" he said. "I have a pretend buzzer that I play along with, and I watch Alex every night."

You'd think the hardest part of this show would be the questions, but Jennings says the buzzer is tricky.

"You can't press the button as soon as you know it," he said. "You have to wait for Alex to finish reading the clue - and there is the briefest of beats, a guy flips a switch and [then] you can buzz in. If you buzz early, you actually get locked out for a fraction of a second. So you are just trying to get in a rhythm with Alex's voice to find that exact second to buzz in. It's like a zen thing - it's like hitting a curve ball."

"James and I actually met at Bumbershoot once when I was doing a trivia contest," said Jennings. "He came up on stage for the final round, but he was still a young apprentice, he was buzzing too fast and he actually finished third. But he's very funny on Twitter which I really admire. Winning two million on "Jeopardy!" is hard but being funny on Twitter may be harder, so I have a lot of respect for him."

All three contestants have been doing some friendly sparring online since the competition's announcement.

"I've played Brad [Rutter] in four different tournaments and he's beat me three times," said Jennings. "I'm like a perpetual second place finisher to Brad. Somebody said 'Often a Bradsmaid never a Brad' which - that really hurt. But I've played against him a lot and I know his game, and he's the best I've ever seen. Almost unbeatable on the buzzer. I've been sitting in the audience when he gets an insanely hard final Jeopardy! that I didn't know - and he just keeps a cool head. I know just from experience, to beat Brad I'm gonna need the breaks."

While he can acknowledge his competitors' strong suits, don't count Jennings out just yet .

"My biggest advantage is comfort out there. I always have so much fun playing 'Jeopardy!'" he said. "It's very intense beforehand, I never sleep well the night before, but when I'm out there it's like 'Yeah, this is the thing I do, I'm at work'. I always have a great time and I always feel very relaxed, and that's what I always tell people about the way to play 'Jeopardy!' If you have a good time, then you play better. So maybe being a little less intense will help me out."

The show's team is keeping pretty mum about the game board difficulty levels, or what any clues might be.

"All of that stuff is kept away from the tournament players, but it's a very interesting situation because they are writing for a set of contestants that they know," said Jennings. "For months they have known that these are the three people, so it will be a conversation to make sure the material is fair for all three players and doesn't appear to favor Ken, Brad or James."

So - there probably won't be any Seattle questions!

"'Jeopardy!' clues tend to get harder in tournament scenarios, so I wouldn't be surprised if you saw some very hard categories and very hard answers this time around."

Jennings is the most seasoned of the three players, in more ways than one.

"I can tell you firsthand that age matters on 'Jeopardy!' he said. "I wish it didn't because I am 15 years older than when I first played, but I can tell the difference. I'm a little bit slower on coming up with names, and my rhythm isn't that great on the buzzer."

Holzhauer, at 35 years old, is the youngest.

"A lot of the things that people notice about James on TV is that he jumps out to the big lead and the game is over by the first ad break," said Jennings. "That's going to be a lot less effective during the tournament situation, that shock and awe approach. Brad and I are not going to be intimidated by that. He's not going to be able to make some blow up bet on the first daily double and we just hang up our buzzers - which happened a lot during his regular games."

In tournaments like this, you have to find your opportunity - and then be aggressive.

"[I think] you are going to see a lot of insane, seat-of-your-pants daily double wagers. People are going to put all of their chips when they have an opportunity, because there's not going to be many chances. The hardest thing about [going against] James is accuracy. People don't understand, James has 98% of question-answering correctness which is insanely hard to do. That means he's never guessing. Every time he presses the buzzer he is absolutely sure of the answer and it blows my mind."

It may be a young person's game but every time Jennings' gone back on the show, he is pleasantly surprised.

"I can fall back into the rhythm. When I was on last year, it was just like that," he said. "I could play on everyone's level, and I played Brad to a draw. I feel like I still got it! I don't know for how much longer - but for now I think I can play toe-to-toe with those guys."

While Jennings is excited to get back to the show for many reasons, nostalgia is high among them - like spending more time with Alex Trebek, who is battling stage 4 prostate cancer.

"Last I heard Alex is doing very well," said Jennings. "He started the second round of chemo and his numbers were very good. He's already had a remarkable recovery for someone with that kind of diagnosis. He still does a very difficult job with amazing plumb, which I admire the heck out of. Last time I saw him it was after his diagnosis and I went backstage to see him and I thought 'I hope this isn't the last time I see him.' I grew up with this, this is my favorite show. So no matter who wins this tournament, I'm just delighted I get to spend more days with Alex again. He's the only 'Jeopardy!' host I can imagine, and I hope it's not the last time."

G.O.A.T. starts at 8 p.m. PST Tuesday, January 7 on KOMO 4 - and runs, at that same time nightly, through the 9th (additional shows may be added if necessary). When we asked Jennings for one final message for Brad and James going into the showdown, he was straightforward and to the point:

James and Brad, I just want to put you guys on notice. I may be a little older. I was playing during the first Bush presidency a long time ago. But I'm not old and dried up yet. I can still play this game. Watch out.