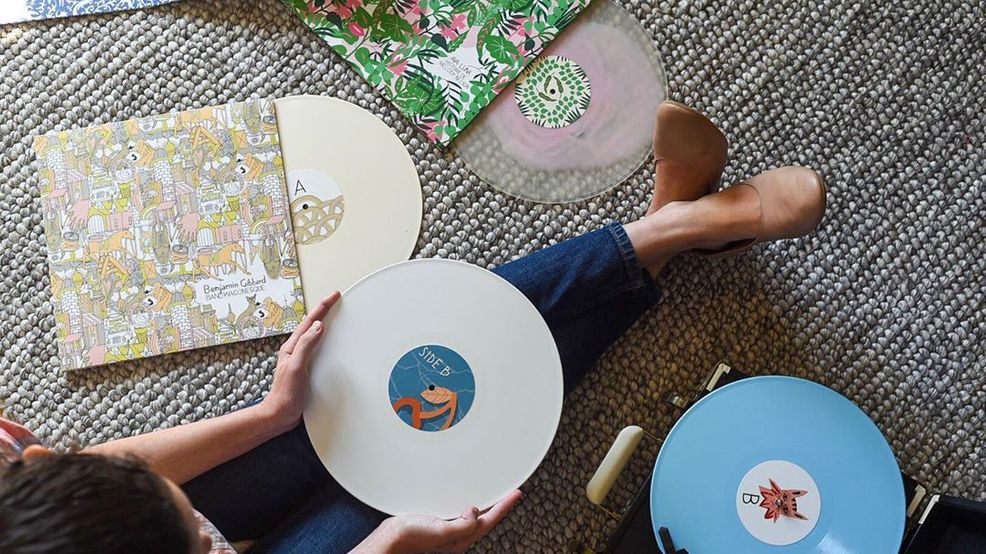 Food + Records: Seattle-based subscription box pairs the flavors of a meal with music

What does music taste like? Is it hot and spicy like a white bean and turkey chili? Does it have the unexpected tang of a lemony turmeric tea cake? Can you really put a flavor to the sounds that go in your ears?

Absolutely, according to the husband-wife duo behind Turntable Kitchen, a food and music blog that also offers "Pairings Box", a subscription that delivers an interesting combination: the vinyl record of a new artist paired with a spice and recommended recipe.

A soundtrack to a meal. A flavor for the music.

I received my own pairings box a few weeks ago, a package simply branded with their logo and tastefully packed in dark tissue paper. It included two records of artists I didn't know, Clavvs and Quivers, as well as two packets of spices I would consider obscure by a layman's cook (unless you've used epazote in a recipe, in which case, you're probably very sophisticated). Separate, it could be easy to see these items as sorely unrelated, circling their own orbits of use and appeal.

But there is a reason our toes tap as we taste test a sauce for the first time. The similarly therapeutic natures of music and cooking make them organic bedmates. And now more than ever, music and food are two beacons for those of us trapped indoors in a seemingly endless loop of identical days. What better than receiving a box filled with both on your doorstep, outlining what you should be listening and what you should be cooking?

"For us, music continues to feed our soul during these troubled times," wrote Matthew Hickey, one of Turntable Kitchen cofounders.

[Saving Seattle Music: Fighting for the survival of beloved venues]

I spoke with Hickey and his wife Kasey following the current guidelines for social distancing: via email. With three children at home, Kasey working full-time and Matthew keeping their side hustle afloat, the Hickeys aren't exempt from the struggle many of us are feeling — the delicate, often finicky pendulum of keeping kids entertained while also fulfilling obligations to our jobs.

"I'm not going to lie, it ain't easy," said Matthew. "We've made it a priority to make sure we get in a lot of physical activity: yoga, bicycling, jogging, and so forth. And we're also doing our best to homeschool the kids ourselves while keeping things fun like building LEGOs, the occasional movie night, and regular weekend dance parties in the living room. Then, once they're in bed, a cocktail and a vinyl record to relax."

Taking that time to relax — enjoying an adult beverage, a plate of thoughtfully prepared food, a new movie or a moment of peace listening to a favorite album — is what we need at a time like this. Luckily, Turntable Kitchen makes it convenient to discover new music and try out handpicked recipes from the couch to the kitchen and back, the only places we're venturing these days. The box also includes a very detailed critique of the album and "Tasting Notes", which gives a little more insight into their choice.

Born when the two lived in San Francisco, Turntable Kitchen (along with the Hickeys) has since relocated to Seattle "because [they've] long been inspired by both the local food and music scenes" crediting it as "a city simply buzzing with creative energy and just oozing with great food and music." Though they are both "mostly self-taught" chefs, sporting some experience working in restaurants and artisan coffee roasters, Matthew and Kasey have turned their passion into the business of sharing joy.

"A good song can make me feel better about where we're at," said Matthew. "There's always a thrill to discovering new music, and we need that now more than ever. Likewise, we find kitchen projects to be a great way to do something fun at home that can distract you from everything else going on."

As a team, the Hickeys have it down to, well, an art. Though it is a true collaboration and they both have a hand in all aspects of each month's music and recipe selections, they tend to favor one over the other. Matthew is the music scout. In his free time — pre-pandemic, obviously — he was a regular at The Sunset Tavern and Tractor Tavern in Ballard, and his dream is to own a record label. Kasey was a food blogger before they started Turntable Kitchen, and it is her dream to write a cookbook. She heads the food portion of the Pairing's Box.

So what album and food would two music/food connoisseurs bring with them on a desert island? Matthew lists carnitas and Al Green, while Kasey chooses to pair fish tacos with Florence & The Machine. They admit, however, that music from PNW artists is most likely to be found wafting through their home. For these Seattle transplants, Turntable Kitchen is a creative outlet, but it's also a way of supporting the businesses and artists they believe in.

"Championing the things we love," wrote Matthew. "Most of the artists we feature are up-and-coming artists we think are exceptionally talented and deserve to find their audiences... Likewise, we take every opportunity to champion local restaurants we love, cookbook authors that excite us, coffee roasters that inspire us, and so forth. If we're contributing to those communities in some real way, then we feel good about what we're doing."