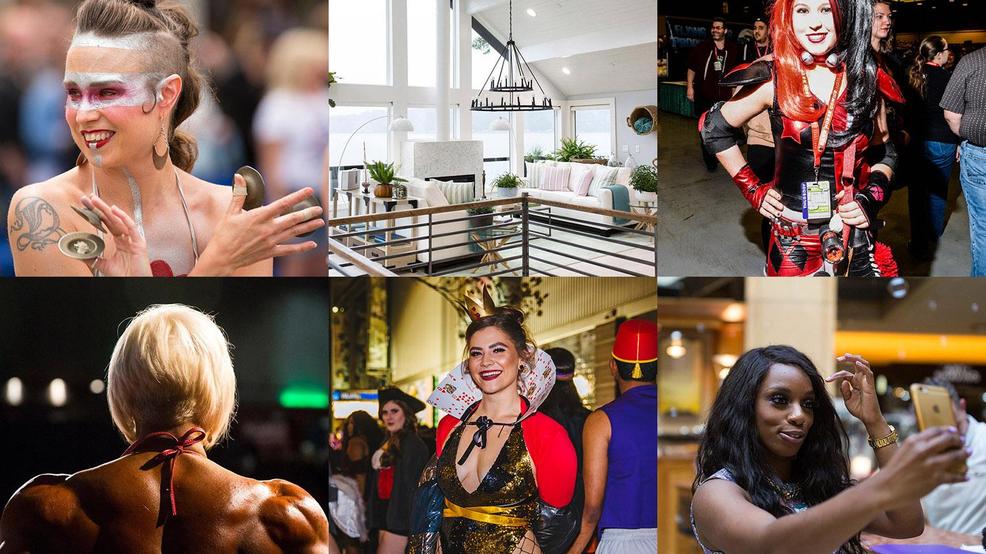 Sayonara 2017! If we learned anything from you, it's that you were a big fan of costumes, fancy homes, and people in various states of undress.

How do we know this, you ask? We crunched the numbers and here are the Top 10 most read stories of the entire year.

No one is shocked by this one! Every year this giant gathering is the largest comic book and pop culture convention in the Pacific Northwest. We go every day, and get a full gallery that you guys eat up! This year had us at four whole days of cosplay, comic books, celebrities, panel and LOTS of makeup.

You guys went NUTS for this tour of the 2018 HGTV Dream Home - probably because it's in our very own Gig Harbor! The home is a fully remodeled tri-level 1970s contemporary waterfront house on Henderson Bay, 3,500 square feet, four bedrooms, and three and a half baths. Its maritime interior is outfitted with gray befitting of the moody landscape, which you can see pretty much anywhere from the many picture windows. The completely remodeled and furnished home, a new Honda Accord and $250,000 will go to the grand prize winner announced in March 2018. (PS: You can still enter online).

Thousands of people came to the WaMu Theater for the annual FreakNight Electronic Music Festival on Friday night, October 27 2017. The Halloween event always brings out wildly costumed fans who dance the night away, go on rides and play carnival games. Everyone LOVED clicking through this gallery to see what the kids were doing (and wearing)!

We always have to police this gallery so darn carefully to make sure there are no stray bits getting into these pictures! And if you've ever been the Parade, you'll understand that this is hard - they're everywhere! The annual 'Naked Bike Ride' through Seattle's Fremont neighborhood happens every single summer around the solstice.

More semi-clad people...we're starting to see a theme here! It may be February, and it may be freezing cold - but no way does that stop the Annual Cupid Undie Run! Were, you guessed it, Seattleites run around in their underwear. Because, why not?

6. This $28M estate is the most expensive property in Washington

Misty Isle is located on Vashon Island and it's WAY more than just a home. It is literally a modern day castle with amenities to make you say, WOAH. With a price tag of $28,000,000 - the entire property is 525 acres with 47 separate land parcels, a horticultural collection of over 3,000 planted trees, 100 different rose varieties of different rhododendrons, shrubs, plants, and perennial flowers.

Sam Hill was a great American businessman, philanthropist, lawyer and advocate in the Pacific Northwest. While you may not recall his name - you probably do know his work, like the Peace Arch between the U.S. and Canada in Blaine, WA, the Maryhill Museum of Art, and Maryhill Stonehenge. But there's another local gem that has his name written all over it; 814 E. Highland Drive in Capitol Hill - also known as the Sam Hill Mansion.

8. Bodybuilders compete at the 2017 Emerald Cup

Over 700 incredibly fit people competed in the 2017 Emerald Cup Championships and Fitness Expo at the Meydenbauer Center in Bellevue. And you guys were INTO IT. I know I personally debated twice as long as usual before deciding to not go to the gym, after seeing these folks and all their hard word. #fitspiration

We see them every single game, we love them, we cheer with them - and we ADORE taking a peek into the process of how they are chosen every year! The annual Sea Gals tryouts always always always make the Top 10 list every year. Sea! Hawks! I mean, Gals!

Another audition - of sorts - but this one is much less physical than the Sea Gals tryout! Casting directors from the hit ABC shows "The Bachelor" and "The Bachelorette" stopped by Pacific Place over the summer of 2017 to host an open casting call for men and women looking for love...on national TV.