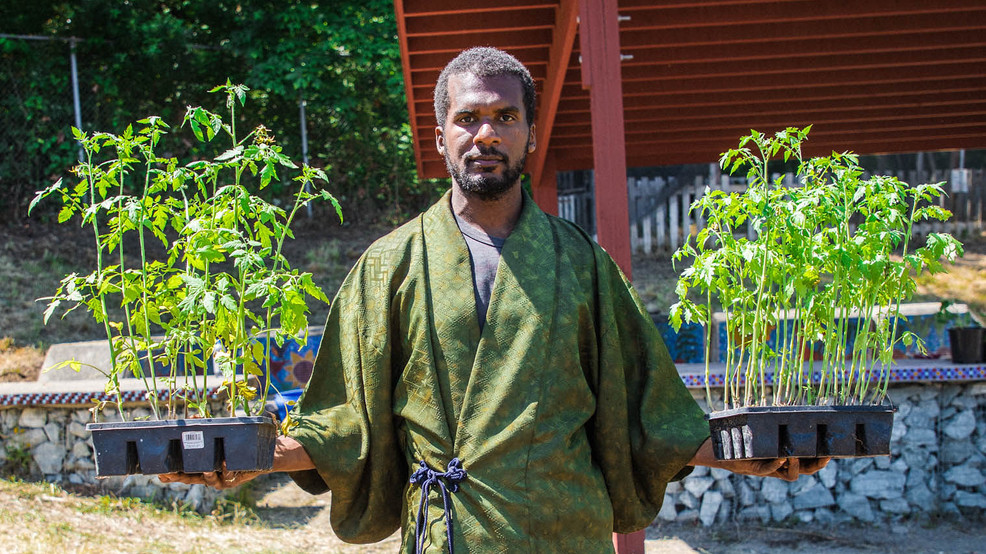 After a successful soft opening in March, John Wesley Sargent and his business partner Kymani Thomas were getting ready to launch their new art gallery The Square in South Seattle (located between the Central District and Beacon Hill). Yet clearly, with the arrival of COVID-19, life had different plans. Thankfully, Sargent labels himself a “perpetual pivoter,” hence why he can now call himself the proud founder of the brand-new Seattle BIPOC Organic Food Bank.

Sargent acknowledges it can be easy to stay in the energy of loss forever, and there is certainly no appropriate amount of time to grieve.

“At some point, you have to keep creating new life,” he said. For him, these past challenging months have been about putting himself back into purpose. He and Thomas have never been money-driven people. The Square was conceived to promote the works of afro-indigenous artists and create a community for young entrepreneurs. So when things took a different turn this spring, Sargent started asking himself: “How do I reinstate an energy of purpose?”

Sargent deeply feels the impact of 40 million-plus people being out of work.

“These aren’t just numbers,” he said. “These are friends; this is us.”

One day Sargent had an epiphany while eating an organic mango in his apartment. Despite any sadness he may feel, he realized he has always had a comfortable, warm apartment to sleep in, clothing to wear and now even an “art cave” to retreat to if need be. Despite all the racism and discrimination he has endured - “Never in my life have I not had food," he said. And as many joys he feels may have been stolen, he feels exponentially motivated to pour his efforts into doing good - emphasizing that not even a pandemic, the police or a president can stop him.

So where did Sargent decide to pour all his time and energy? Into creating an organic food bank here in Seattle. The goal is simple: for every single person to have clean water and organic food. Sargent knows this is a human need we must address, starting with people of color. He explains that although we regularly witness the overt violence of police and other structures, racism manifests itself in countless ways - with access to land and food being a major concern.

He would’ve simply signed up to volunteer, but since he didn’t see what he had in mind, he decided to create his own. And in a brilliant move, he and Thomas are using their gallery as the HQ, creating a food bank backed by a cultural space. Sargent knows that separately - and together - food, art and friendship all add immense power to one’s life.

What makes this food bank different than others? Mainly, instead of stocking up on food, the team will partner with farms and co-ops, meaning the food can come in and go out on the same day. Their volunteers will help promote and mobilize small farms, most of which are currently struggling.

Sargent is launching his creation within the next few days with a hot meal pop up. He is closing in on the original goal of $66,000 but plans to continue the fundraiser once that goal is reached. (At the time we published this, they were just shy of $47,000.) For starters, Sargent aims to make a dent in the budget to cover operating costs throughout the summer. He just received non profit status for the food bank and ultimately would like to have staff members.

Once launched, Sargent explains, someone will be able to walk up to a hot meal pop-up (which will rotate around various city locations) and leave with a tote bag that’s filled with goodies like an organic grocery gift card and printed materials sharing helpful information about local farms, food banks and housing.

Looking out for others is in Sargent’s blood - a philosophy present among his family and friend circle. He credits two major sources of inspiration; first, his parents, who started a food bank, used to take him to the projects as a kid, where they would dole out clothing, meals and prayers. He learned early on that one’s intentions must go beyond mere words to be put into practice. Second, he’s been motivated by his dear friend Keli Lucas, an artist-curator in NYC who’s launched a similar concept in Brooklyn. He calls Lucas a fellow alchemist and describes her as a “Joan of Arc"-type personality.

“You’ll get in a fight telling her something isn’t possible,” he jokes.

Sargent doesn’t understand the concept of “forever charity;” he aims to reinvent the model altogether. “We have to get rid of individualism,” he says. “It’s a threat.” He adds that we shouldn’t be dealing with the exact same problem five years from now. In fact, his ultimate dream involves having a space like PCC, yet where everything is free. Volunteers in the network would simply be able to come in, pick up fresh groceries and walk out.

When it comes to getting involved during this momentous time, Sargent says not everyone has to be protesting seven days a week. He advises people to find their own lane.

It’s also important to take care of one’s mental health. Sargent talks about how much he has been processing these past weeks—information, trauma, grief and sadness, and how he’s often needed to take a couple-hour break to feel the weight of the world and recharge. One of his favorite ways to heal? Sitting in the middle of a park staring up at the sunlight, getting lost in time. Afterward, he’s ready to get back to the tasks at hand. This project has brought up a lot of joy for Sargent, and it parallels a new invigoration he’s felt toward art. Many of his friends here and in New York are at the forefront of painting murals around town; some of their works will appear on postcards placed in the totes.

“We want to give people nutrition, hope, love and connection to community,” Sargent comments, “and art is a big part of it. It’s not about survival; it's about abundance.”