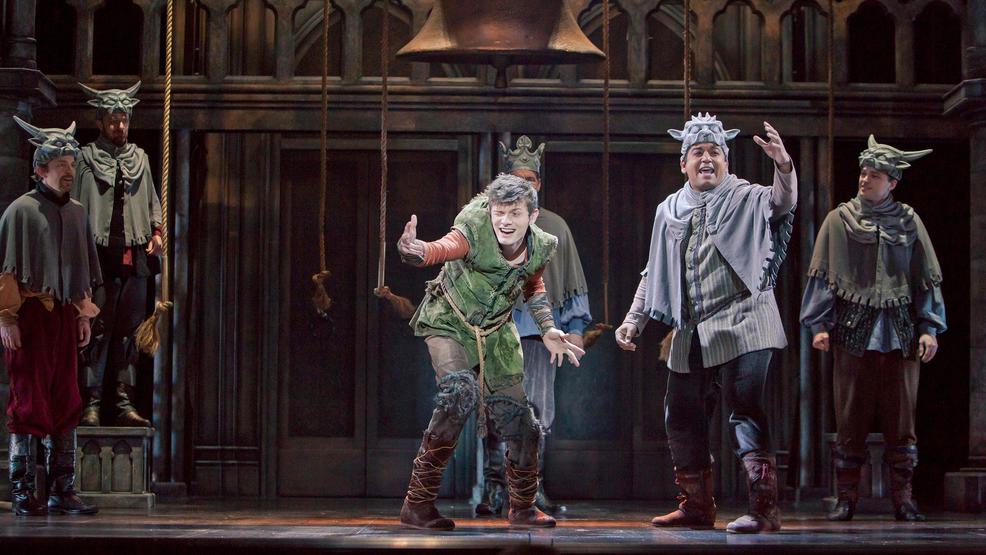 Joshua Castille as Quasimodo and E.J. Cardona as the Voice of Quasimodo in The Hunchback of Notre Dame - Photo Credit Tracy Martin
SEE MORE

Bringing an iconic literary figure to life would be challenging for any actor - but Joshua Castille is embracing it.

"I really enjoy playing Quasimodo, because he is a character that is very sweet and his heart is so huge," he said.

Castille is starring in "The Hunchback of Notre Dame" at Seattle's 5th Avenue Theatre, and showed us how he undergoes a physical transformation to play the part.

"I have a hunch and I have four pound weights on each leg and they're my boots on stage," he said. "It really helps a lot because you feel like you're clomping around - you know? You feel heavy, and I can only see with one eye during the show so I'm closing one eye and sometimes I can't see."

In Victor Hugo's novel, Quasimodo is deaf. So is Castille, and he thinks that fact enhances his performance. In fact - he chooses not to have his hearing aids on during the performances.

"I think that really added another layer to the character," said Castille. "I think it really shows this other level of authenticity, of experience - adding all this other dimension. The deaf experience is much different, and it's not bad or harder - it's just different. I think about taking that and putting that in the show. I think I'm very lucky to have this experience as a deaf person myself to be able to offer that on stage."

A theme of friendship is featured throughout the production.

"[Quasimodo's] voice, his inner heart, is portrayed through sign language," said Castille. "So that's when his thoughts are most clear, that's when he's the most expressive and open with himself. But that only happens when he's around his gargoyle friends."

And of course, there's some romance too.

"The relationship with Esmeralda is very special because it's the first time he meets someone and he falls in love," he said. "But because it's the only person who gives him any kind of attention or any kind of love, he just grabs onto that and immediately wants that in his life. For the rest of his life."

In addition to the mesmerizing performances, there's also amazing music. 'Hunchback' features songs from the Disney musical. Castille feels there's a lot we can learn from 'The Hunchback of Notre Dame."

"I'm really thrilled and it's a very sad play," he said. "There's a lot of grief in it but at the same time I'm really happy because Quasimodo really reminds me to live in the moment, and to really cherish everything - don't take anything for granted."

'The Hunchback of Notre Dame' will be at The 5th Avenue Theatre through June 24th.

From the 5th Avenue Theatre: A glorious retelling of Victor Hugo’s epic masterpiece, this powerful tale of love, faith and prejudice will leave you utterly spellbound. This rich musical gem not only features the voices of a 30-person choir at every performance, but also places at its center a Deaf actor in the role of Quasimodo. Its lush, beautiful score is unlike anything in musical theater today, featuring songs from the Disney animated feature and new music from legendary composers Alan Menken (The Little Mermaid, Aladdin and Newsies) and Stephen Schwartz (Wicked, Godspell and Pippin). Immerse yourself in the power and glory of rapturous music; melt with the passion of a magnificent story.