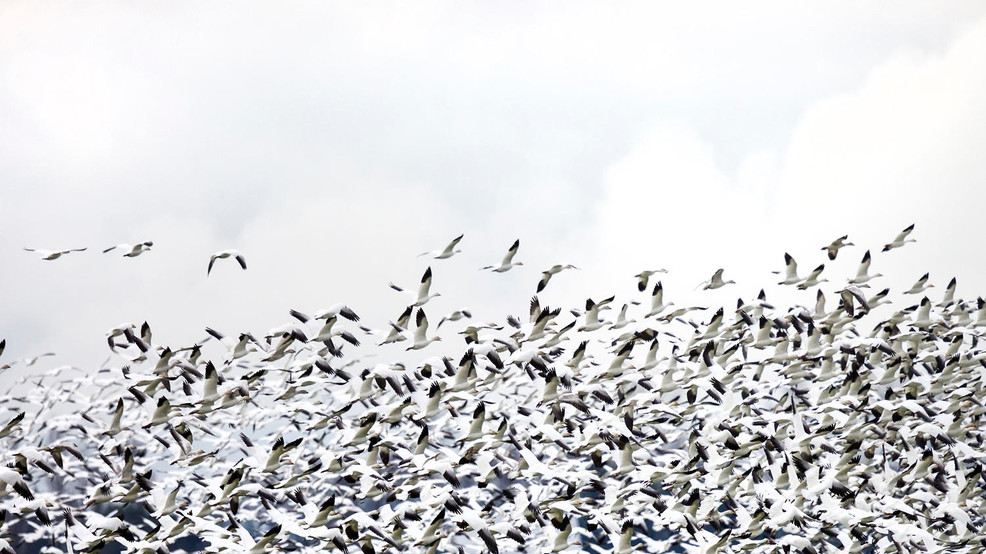 The Birds are Back In Town: Snow geese, swans arrive in Skagit Valley for winter

Living in the Skagit Valley has many perks - beautiful scenery, bountiful hikes, mountains, water, and every winter the return of the snow geese and trumpeter swans.

Several weeks ago I began hearing the familiar and nasal “honk, honk, honk” in the mornings just after sunrise. That sound comes not from an angry driver stuck in traffic, but the migrating flocks of geese. Their V-shaped formations, known as chevrons, lace the sky as they fly over my neighborhood. The entourage of birds began arriving in late October and will stay through March.

As the weather gets colder the number of geese increases into thousands of birds, all descending into the valley - and along with them, birdwatchers. They make this rich farmland area their home until spring. Wondering how to tell a goose from a swan? The snow geese are smaller in size than the swans with white bodies and black wingtips. Their rather boisterous chatter is another giveaway.

Ever hear the term "snowbird”? These flocks are the definition of the term. Their habitat for the rest of the year is up in the Arctic tundra, where they will nest and raise their young in large colonies out on the open frozen prairie.

As autumn approaches they begin their migration south, landing here in the Skagit Valley. With their young offspring in tow, they will spend the next several months grazing on the fertile fields of this area. Typically, they feed on natural delta salt marsh plants, such as those found along the slough of Skagit Bay, but increasingly supplement their diet with residue crops of potatoes and corn. Some farmers of the area even plant an overwinter cover crop of winter wheat for the geese to forage.

Being wildlife, both the snow geese and the trumpeter swans can be a bit transient - moving from field to field every day. This creates a certain level of unpredictability, however, there are a few general spots that are good starting points. But keep your eyes open and cameras ready for you may come upon a flock right along the roadside.

When you do spot them, their simple beauty is mesmerizing, as well as the chorus of their endless chatter as they call to one another. Watch with delight as groups of them take off and land, and better still is when the whole flock takes flight, usually when startled by a noise or the presence of a predator (like an eagle). A bonus show is when the entire flock alights and moves in unison, flying and rolling together as one big ball of birds. This is referred to by birders as a “murmuration”.

A couple of great places to begin when searching for the bird are within the Skagit Wildlife Area, run by the Washington Trails Association. Two main areas, with parking lots and kiosks, are Wylie Slough and Fir Island Farm Reserve, with the latter being my favorite to begin my search for snowbirds and view many other types of shorebirds in the process. Fir Island Reserve is a 225-acre preserve offering a short walk out along the marsh with breathtaking views of Skagit Bay. A winter walk focusing on nature's beauty is a wonderful, family-friendly, outdoor activity. What personifies the PNW more than enjoying the great outdoors!

If not spotted at the reserve, flocks may be sighted along the estuary or explore the backroads to locate them off-the-beaten-path. A pleasant drive along Fir Island Rd, through the valley, and into La Conner may be worth your while. Geese and swans have been spotted along other routes such as Best Road and La Conner/Whitney Road.

Come prepared for the weather because it can turn cold and blustery in the valley. Hats, gloves, and appropriate footwear for mucking about are highly encouraged. To access the wildlife areas, one will need a current WA State Discover Pass.

And don’t forget your binoculars and camera! The geese provide quite a show you will want to capture on video and watch over and over again.

Many times, geese will be grazing in the field to the left as you drive in, so here is to fingers-crossed!