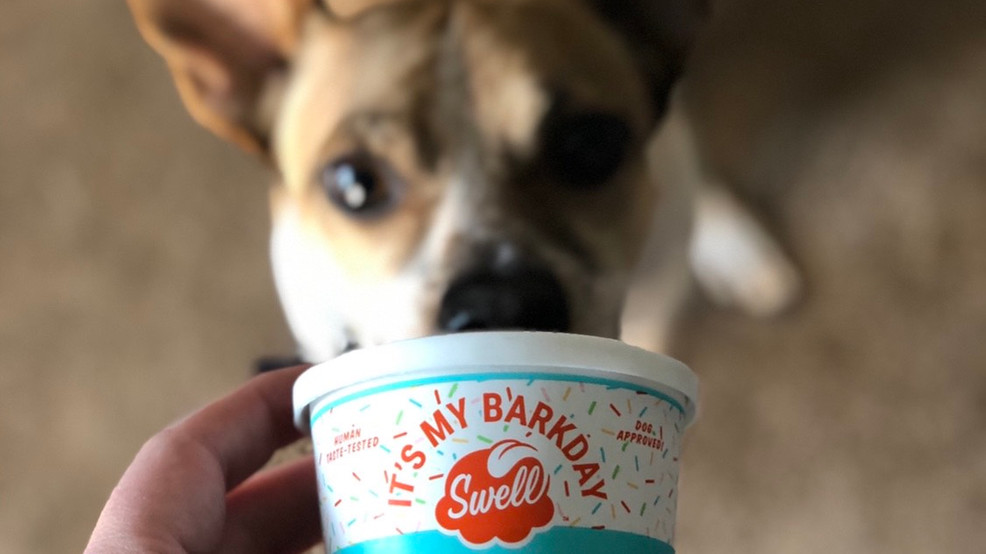 Sorry humans, this gelato is just for the dogs

For the majority of her life, Debbie Hendrickx has been passionate about two things: dogs and fashion.

“I never believed doing something with dogs was a valid career option, so I chose a career in the fashion industry,” said Hendrickx.

She spent 18 years working for Nordstrom, starting on the sales floor and working her way up to headquarters.

Swell, Gelato for Dogs was born from Hendrickx’s love for the smooth richness of gelato that “makes you close your eyes in bliss at first lick.” She began making gelato at home as a hobby and noticed the begging eyes her two Chihuahuas, (Patches, and the late Billie) would give her every time she enjoyed the treat. Not wanting to give them dairy and sugar, she began experimenting with more dog-friendly ingredients, like coconut milk.

“I created a few flavors that they and I really liked, and gave all of us that ‘closed eye bliss.’”

When her career at Nordstrom came to an end, she wanted to take the opportunity to include dogs in her work. She just had no idea how to tie dogs into the corporate skills she possessed.

One evening, it hit her.

“Instead of limiting myself to corporate skills I was good at, I just thought about things, in general, I really enjoyed,” she said. And what she really enjoyed was making gelato. Swell Gelato for Dogs was born on the spot.

NOriginally from Belgium, Hendrickx moved to the Pacific Northwest at age 24. She first heard the word “swell” in an old movie and immediately fell for it. Disappointed that the word gets little use today, she decided it would be the perfect name for her business because, well, she believes that dogs are swell.

She applied for permits a few weeks later, purchased an orange gelato cart, and headed out to Magnuson Dog Park. Hendrickx remembers the awkward looks she’d get from people once they realized that she was selling gelato for dogs. They either looked at her like she was a genius - or nuts.

Enough people were intrigued and ambled over to buy their dogs a gelato. The weather remained nice, so Hendrickx continued setting up her cart, seeing familiar faces week after week. After a few outings, she began to sell out, with customers encouraging her to sell her product in stores.

Before long, she was battling Seattle traffic all day long, hand-delivering gelato to 25 stores in the region.

At that point, she was making the gelato using a countertop gelato machine in her home and storing the product in a chest freezer. Four years later, she still makes the gelato in her home, practically dedicating the entire house to her business.

“Spare bedrooms have been converted to storage rooms, and the garage no longer houses cars but walk-in freezer instead,” she said.

What remains the same is the process. Each batch is handmade using the traditional artisan process with minimal ingredients and stabilizers and no preservatives.

Hendrickx originally started with two flavors: Banana Peanut Butter and Pumpkin Cheddar. Eventually she decided to add more, including a completely vegan option with Sweet Potato Molasses, It’s My Barkday, a Triple Berry Blend, and the seasonal ‘Nog for Dogs Spiced Pumpkin. The bases for each flavor rely on either coconut milk and/or bananas, with additional flavors like peanut butter, pumpkin, or molasses added to the mix. Each batch is taste-tested personally by both Patches and Hendrickx.

Swell Gelato can be found in 450 stores across 10 states, including the entire west coast, Utah and Arizona, as well as several states in the south. She’s hoping to rent out a proper facility soon to allow her house to return to being a home.

A portion of all sales is donated to the SPCA International.

“I feel so lucky to be doing something I love so much,” she said. “Knowing that there is a way the little orange cups of joy can make a difference in less fortunate dogs lives around the world just really fills my cup.”

While she and Patches - her 7 pound, 12-year-old, one-eyed blind Chihuahua - can no longer make appearances at the local dog parks due to the production volume today, she shares the joy in seeing dogs experience that gelato bliss through Instagram.

Hopefully, dogs are much better than people at ignoring those pleading begging eyes, because their humans are going to want to taste of every Swell gelato flavor.