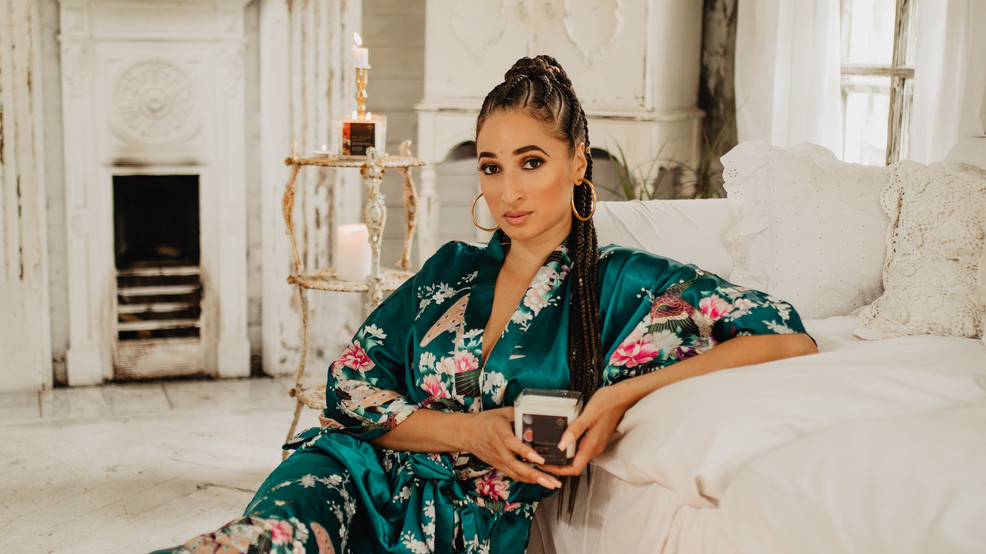 Sukie Jefferson knows that many new business owners go into the process fearing their industry might be saturated and asking the daunting question: “Is there room for me, too?” Yet Jefferson never started with that thought; instead, her passion-turned-profession started with an intense need to be creative and use her hands.

Since launching her candle business Sukie’s Candle Co. four years ago, Jefferson says, “The Universe has been sending a resounding 'Yes,’” every step of the way. She feels incredibly fortunate that, from the start, the demand for her gorgeous non-toxic, vegan and eco-friendly candles has been consistently higher than the supply.

After hearing her story, one can’t help but sense that her customers are picking up on the very organic way in which Jefferson got into this work — and the very intentional and authentic ways in which she’s gradually built her brand.

Jefferson, a native of the area and graduate of Garfield High School, attended Spelman in Atlanta for college and then spent time in Brazil and Africa (Bahia, Brazil, and Mwanza, Tanzania). She landed in the Bay Area for graduate school before heading to L.A. to get a “big girl job,” like she thought she was supposed to do.

During her three years in marketing and advertising, however, she felt incredibly trapped and began to notice a trend among her peers. Everyone seemed burnt out and disconnected from themselves. Yet people stayed on, she says, out of obligation.

To combat falling into this trap, Jefferson began to channel other ways of expressing herself. She had started mediating and was mid-meditation one day when she received the message to start making things. This gave her the idea to experiment with creating household goods, from body scrubs to face oils and creams.

Before long, she was using every lunch break to visit the local co-ops and health goods stores to stock up on supplies. Next thing she knew, Jefferson says she had become a “mad scientist” of sorts, watching YouTube tutorials and whipping up new innovations in her kitchen.

She thought the candles would tank since it’s such a scientific process, yet the first batch she made turned out pretty well. She spent the next year in her kitchen teaching herself the craft and feeling inspired by aromas that ushered back memories of travels and adventures past.

Owning one’s business can inevitably present challenges. At the beginning, Jefferson says, “A lot of people had ideas about what and how I should be doing this there were a lot of cooks in the kitchen.”

Yet she knew she wanted her creations to reflect “bold, sexual, sensual female empowerment,” and she wanted to enforce the message that we don’t need to wait for a special occasion to practice self-care. She adds, “I wanted to create a brand and product I would burn at home.”

Jefferson had to learn to trust her own vision and voice, knowing how she wanted to do business and believing that there was plenty of room for her. She feels good that she’s been able to build this 100% self-owned company in a “fluid and graceful way,” while taking as gentle an approach as possible. The process, she explains, is not only a form of self-care for those receiving the creations, but the entire process is a form of self-care for her, too.

These days, the full collection boasts 20+ aromas, including three brand-new ones getting released this month (like eucalyptus and mint). Jefferson has worked on refining the collection over the years, and has already retired some scents.

She wanted to be sure these were products that could be put comfortably into others' homes. That said, the candles use 100% pure soy wax, derived domestically from American farmers. They always use lead- and zinc-free cotton wicks with phthalate-free fragrances. Lastly, each candle is petroleum-free, infused with natural essential oils, and they're individually hand-poured in reusable glass containers.

The resounding favorite? Seattle Fir, which she says “smells the most like home” and is a “clean, mild citrus, woody, fir balsam scent with intoxicating earthy undercurrents.” Jefferson says this top-seller reminds her of childhood walks through the forest.

Other favorites (especially in summer): Coconut Lime (that can whisk you away to tropical beach) and Grapefruit Mint. She also points out Amber Noir, a sultry, romantic scent that’s a fusion of mandarin, jasmine and rich amber with undertones of sandalwood and musk. "I use them for different occasions in different rooms," she says, adding how deeply smells can be tied to our memories. "It's fascinating how we use aroma and scent to re-create our environment.”

Since Jefferson moved back to the Seattle area in August 2018, this hobby has truly evolved into something real; the response, she says, has been pretty remarkable. While the bulk of her sales are done online, the candles can also be found in a couple of stores (including two on Whidbey Island, where she lived upon first returning home). Her first Seattle location was Fremont's Urban Earth Nursery.

Earlier this year, around the time of the George Floyd murder and subsequent wave of Black Lives Matters’ protests across the nation (and world), Jefferson’s sales surged. In fact, she had to bring in help, and she says for two to three weeks, they were simply “buried in candles.” She found it incredibly touching to see so many people supporting BIPOC businesses and "putting their money where their mouth is,” she says.

That said, she strongly hopes that the trend sustains beyond the time when BLM is a trending hashtag. "In essence," she explains, "it was both touching but also a long overdue redistribution of economic revenue through Black and brown communities. "

Jefferson's longer-term goal? It’s lofty, she admits, yet she also believes in speaking things into existence. She loves the idea of bringing in other women and women of color. Down the line, she’s excited to create a space in which to generate more economic opportunities and jobs.

Jefferson feels this is a new era of Black women creating businesses of their own, something she finds both empowering and sexy. She sees a rise in brands reflective of “our stories and what inspires us." And she’s so encouraged by the fact that what is being put out into the world seems to be resonating.