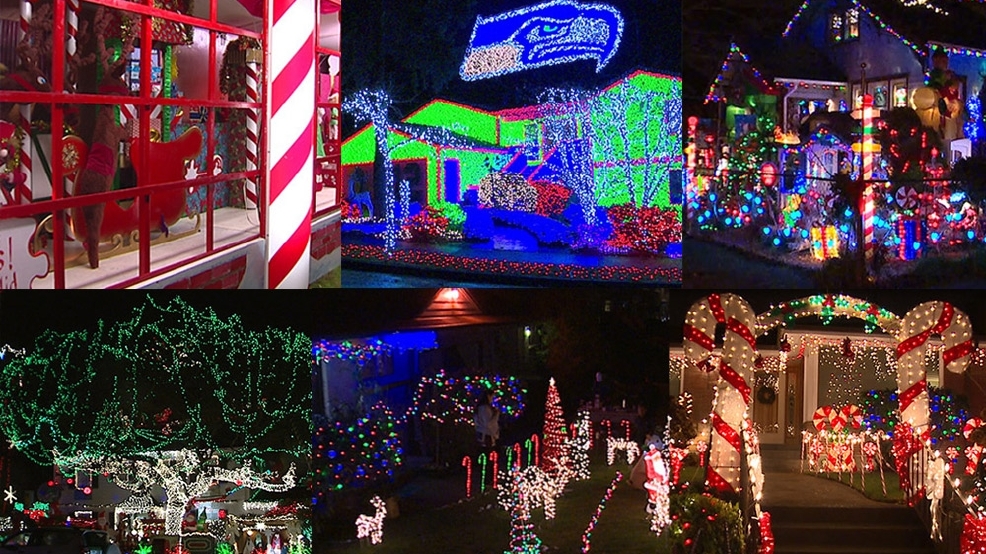 Steve Pool has been bringing you a sampling of Holiday lights displays from all over Puget Sound for more than 20 years now and the tradition continues. Taking a Christmas Eve stroll with the family? See if any of these houses are in your neighborhood, and take a look! (Image: KOMO News)
SEE MORE

Steve Pool has been bringing you a sampling of Holiday lights displays from all over Puget Sound for more than 20 years now and the tradition continues.

Taking a Christmas Eve stroll with the family? See if any of these houses are in your neighborhood, and take a look!

West Seattle - 3909 SW Charlestown Street
Jim Winder works his magic on a home-packed with lights set to music. Unique talking figures on the roof. Great sit-in-your-car and watch spot as the Helmstetlers' house is right on the street. Tune your FM radio to 101.9.

Poulsbo - 27630 Big Valley Road
More like a destination spot than a home light display. with a 300-foot long path through the woods, lights, and one of the best manger scenes around, we think. Ron Comin is an architect; it shows in his village and train layout. The North Pole-work shop / Santa's house/reindeer stables await you as you climb the trail.

Seattle - 10723 Densmore Ave N
It's a mechanical Christmas fantasy world. The biggest visitor question is-"where do you buy this stuff"? Dan Pardy and Dan Breidenstein have created a world so fantastic and so unusual there is no way it came off the shelf. They have built everything you see,by hand -- no computers, no electronic controls.

Port Orchard - 3045 SE Royalwood Pl.
Two acres decorated by a guy we call Mr. Christmas. Charles hosts a summer time Christmas character swap meet. He has been collecting decorations for years and many are out on display. He even has a movie screen-village and train (in its own building) music, lights 300 blow mold figures, a fire pit, Santa on the weekends.

Issaquah - 9325 240th Ave SE
There's 400,000 lights but this display, set to music, is not about size or greatness-just great art, electronics, and design done by many members of the Ginnaty family. These guys do Christmas up. There are goodies for the kids, Santa shows up from time to time. Patriarch Jerri Ginnaty is very proud of his efforts on behalf of the Issaquah food bank and Toys for Tots -- bring something for the bins and help break his enviable record.

Kirkland - 11217 NE 100th
Tune you car radio to the music and watch the house move. Sports fans, this is for you, from the giant Seahawk, on the roof, to the voices of area sportscasters-the show goes on for an hour! But wait there's more, knock on the door -- yes, go in the house! -- and view the large village and train layout, including a snow tunnel for kids. Bring some food for the food bank, if you can.

Mount Vernon - 23075 Franklin Road
Blow mold heaven, hundreds of figures displayed on a large lot. Mel and Gaye Fisher were not going to decorate this year, but friends would not let the "King and Queen of blow mold figures" off the hook. Three guys from the decorating community came to the rescue, helping the Fishers put out several hundred of their several thousand blow mold figure collection.

Arlington - 25218 Meadow Rd.
Dianne Krieg, has been collecting and showing blow mold figures for years. She has a very organized display of old (50s and 60s) to 2014 blow mold figures, arranged in order, featuring a 100+ blow mold nativity scene.

Tumwater - 3747 107th Ave W.
Two and one half acres-everything about this display is well crafted, well thought out, and big. Steve and Susan Hurst even have a special parking lot on the property. Visitors travel a boardwalk to a lake with a giant American flag-they even have a Christmas shop. Collecting for Union Gospel mission.

Maple Valley - 22011 SE 269th Pl.
Leave no spot unlit, is the family motto. Bring your sunglasses and food for NW harvest. Steve Pahl loves his gadgets, his lasers, his strobe light, and apparently his strings of lights. The rule is a light every four inches. Use caution when approaching, don't be blinded. You will find Steve Pahl to be a very "bright" man.

Mountlake Terrace - 6107 227th SW
You can see this one from the 228th I-5 overpass, but you would be missing some great music and lights, if you don't get down to the dead end street on 227th PL where Jeff Layne has assembled some great songs and set then to the lights. Unique to this display are "drip lights" which look like they move to the music. Next year Jeff is working on adding "talking trees" to his exhibit.

Seattle - NW 85th and 23rd Ave NW
A display with much history, been shining since the 1950's. Great drive thru-can get crowded, be patient, multiple houses with some very creative displays, many neighbors get involved, lots of handcrafted-one of a kind-never to be seen anywhere else stuff.

Tacoma - 1720 S. 9th
Lee even looks like Santa, you'll notice if you meet him in his packed Christmas display-this year on the theme of "Candy Land". As full as it is-what you see on the house and in the yard is only about 1/8 of the decorations Lee owns! Lee is a professional artist and it shows in this well designed lighting event. To see the detail get out of the car and walk the fence.

Bothell - 16504 112th Pl NE
What a fun place, with a U-shaped driveway-easy drive through viewing and access from Hwy 405 and NE 160th. Meet the smiling Keeners at the head of the driveway-they are amazing ambassadors of Christmas cheer. If you are in the giving spirit-the Keeners donate to the Ben Towne foundation for childhood cancer research. In two years you have helped the foundation raise $25,000 for this cause. Jeff, Candice and their elves hope to raise $15,000 this year alone.

Renton - 4907 NE 2nd
This jolly, white bearded Redmond Fire Department mechanic has a holiday block party when he turns on his lights. If you missed it, do not fear, he left the lights on for you-lots of lights. Mechanics know how to build stuff, and this year Doug figured a way to elevate his star fifty feet higher over his manger display. Great detail, artfully displayed.

Renton - 13835 SE 146th Pl.
Private art along a public walkway. Bob has been carefully building (literally) the display in a neighborhood walkway for many years. Candy Cane lane-arches-100 blow molds, and a series of hand built gadgets (mechanical) designed to get visitors in on the action.

West Seattle - 5605 Beach Drive
West Seattle's famous jewelry shop family has thrown everything they have in to this years' display on Beach Drive. New this year, a giant star under the canopy of a tree-look up from the sidewalk. Speaking of sidewalk-getting there is the only way to view all the surprises crowded into the Manashe front yard. Check out the rather large locomotive.

Puyallup - 1615 34th St. SE
These guys decorate their whole house-AND the street they live on. The Santa family has been known to sit themselves down in a sleigh (right there in the middle of the street) while Julie Halfaday happily snaps a photo of those wishing to sit with the "Claus". Lots of new bright white LED lights will pop out at you-and for the traditionalists-check out the older three dimensional decorations.

Skyway - 6804 S. 123rd
"Family" means everything and this family was called to action when Lionell Kinchen, master Christmas decorator became trapped in a wheel chair and a body attacked by cancer. Nephew Stacy Kinchen and family kept the spirit alive for Lionell, even if the body was weak, by putting up the lights, that Lionell could not. Not a huge display, or blinding lights but one of the best Christmas stories ever.