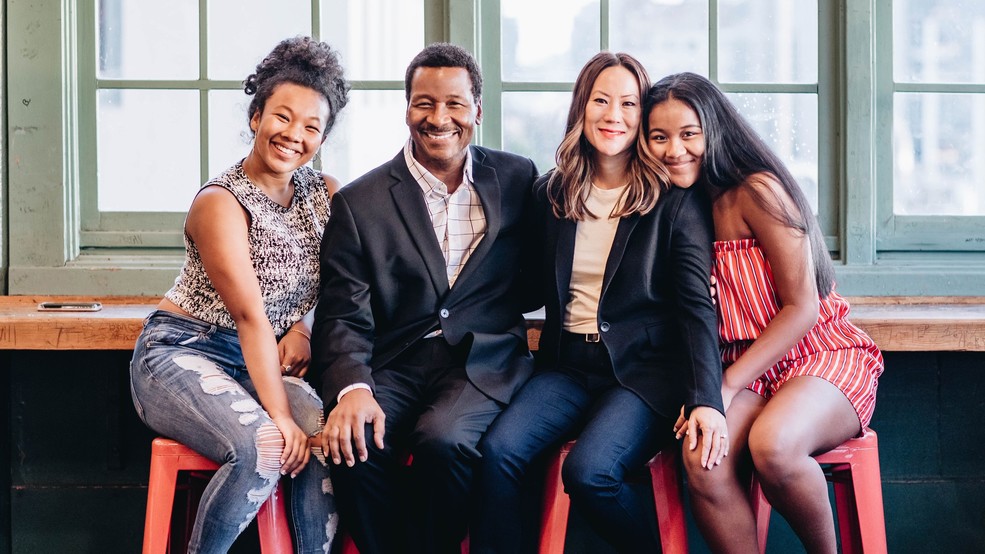 As KOMO TV's lead weather anchor, Steve Pool is used to forecasting the future, but he couldn't have predicted the health news that would change his life.

"I was on vacation and I got a call from my doctor on my cell phone," said Steve. "And I fully expected him to say, as he always does, 'Hey - you're fine, go forth and be good.'"

This time was different. He had prostate cancer.

"I can't even say it because , you know, it makes me emotional," the anchor swallowed. "That was a shock. It was. You start thinking about a lot of things. Contemplate your lifespan and - what about my family? Work? And so many things go through your head."

Even more difficult than hearing the diagnosis was sharing it with Michelle, his wife of 24 years, and their daughters Lindsey and Marissa.

The couple gave it to the kids straight - there wasn't a lot else they could say.

"I think, like mom - there was a lot of shock and disbelief," said Lindsey. "Like, no way, that can't be true, there's got to be something missing. Then you kinda think why? Why did this happen? Why me? Why us? Why this family?"

"And then you told me an hour later and I didn't really know what to think," said Marissa. "Because you don't know what's gonna happen. I had no idea if this meant something horrible or if it was gonna be OK for us."

The whole family went through a period of adjustment, taking a while to sift through the information. What is prostate cancer? How does the treatment work?

As their new reality started to sink in, he had to let his other family know, his family of viewers.

"In an odd way I actually felt the love around me," he said. "And that was amazing. When Mary [Nam, co-anchor] and I did that video, when I was saying I'm gonna be out for awhile."

Steve started treatment at the Seattle Cancer Care Alliance Proton Therapy Center. Every day he goes to a procedure at a facility up in Northgate.

"They have these amazing machines that look like Star Wars, ya know?!" he said. "They position my body and they start shooting that stuff where they can, zap where they can, where the cancer is. And I do that every day, and it's ok."

The treatments leave him a little groggy and unable to drive, but his girls have his back.

"It definitely is weird," said Lindsey. "It was like a bit of a role reversal, because maybe only like six years ago, dad was driving me around to the mall. And now I'm driving him to the mall, so it's an interesting change."

Marissa used to be scared of driving on the freeway, but she got over that - because of her dad.

"Anything I can do to help out!" Steve laughs.

In fact, just last week he completed the program. Through it all - he's stayed positive.

"This isn't the best situation and it's not the best time in our family's life - but he just kind of goes with it," said Michelle. "And I really, really, really appreciate that. He doesn't fight it, he's not angry about it - where a lot of people could be angry about - it he just gets it done."

Since revealing the news, Steve and his family have been receiving an outpouring of support.

That was just the beginning.

"When I see things like this - it's just sort of mind-boggling and frankly, uplifting," said Steve. "I opened this and looked at it and instantly started crying. I couldn't believe it. It was just so wonderful."

And the letters. Hundreds of them, coming in every day. Those notes of encouragement, along with emails and cards from viewers, give the family the biggest boost. They often read them together. The fact that so many people care so much for Steve, means so much to the Pools.

"He's so loved you know?" said Lindsey. "I'm kind of glad that this was one of the results of this situation is that he got to see how much of an impact he has on other people, and not just on his family but pretty much the entire Seattle area."

"I get asked if it annoys me when people come up to me [as Steve Pool's daughter]," said Marissa. "I'm like 'No!' It's really nice and it makes him happy. He's a legend and he doesn't even know it."

"We're just so, I mean - I could start crying right now," said Michelle, tearing up. "But we are just thankful for people that we don't know. People that we do know. They have rallied. They have been our strength. It has been amazing and they have told me over and over 'You have a strong community and people really love you and want to take care of you.' We've really, really felt that. And it hasn't always been easy - but it's been the outpouring that's been amazing."

For now, Steve is focusing on getting back to good health. Everyone is hoping he's back soon, including Steve himself.

"To answer the question of all the people 'When will I be back?'" he said. "As soon as I can get my body right and my brain right - ya know? We are blessed."