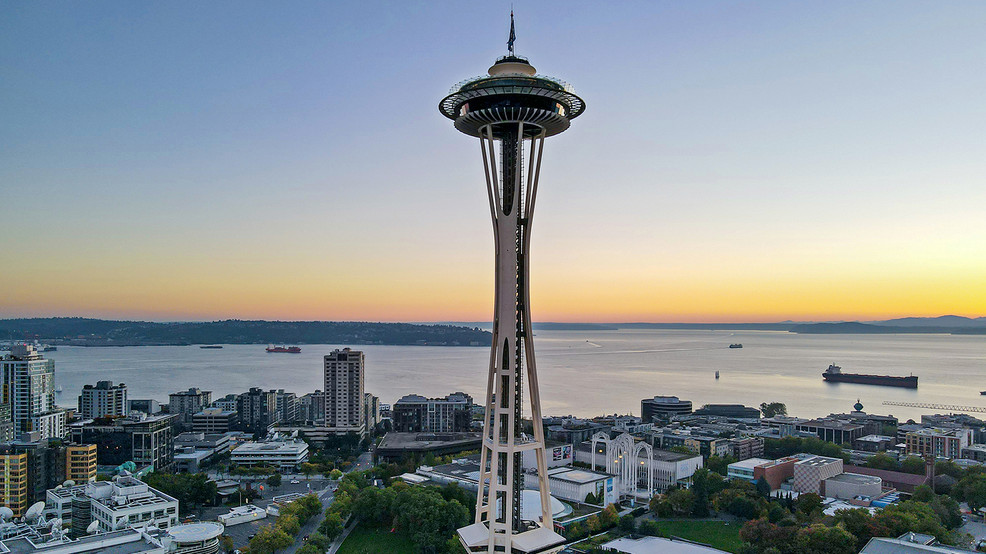 Through the Lens: TV Shows & Movies starring the Space Needle (real or fake)

For those born after 1962, it is hard to comprehend what Seattle looked like without its most prominent landmark, the Space Needle. It has become so synonymous with the city, that many movie and TV series has used this unique skyscraper to help establish locations. However, many of these productions weren't even filmed in town, and would just use some stock footage of the icon. For instance, the movie "Where’d You Go Bernadette?" was actually shot in Pittsburgh. Many more, including the Twilight series, "Firewall" and TV series like "The Killing" were mostly shot in Vancouver B. C. Sometimes the Space Needle that's featured in these productions is not even the real thing, but just CGI special effects. Even so, there have been a few that have not only included the Space Needle in its story telling, but made it into a supporting character.

We've compiled a list of productions that have featured the Space Needle, real or fake, in a prominent way. Noticeably absent from this list are films such as "Sleepless in Seattle", "Ten Things I Hate About You" and "Henry and the Hendersons" because the Needle itself was only shown briefly.

The Space Needle was created to serve as a focal point and observation tower when Seattle hosted the Century 21 Exposition, also known as Seattle’s World Fair, from April 21 to October 21, 1962. To promote the event, public service announcements were created which featured images of the Needle as well as many of the buildings at the Seattle Center which are still used today. You can find these on YouTube thanks to Seattle Achieves.

Bell System, now known as AT&T, created the short film, "Century 21 Calling " which chronicles the adventures of two overly-excited teens as they explore the fair. A good chunk in the middle of the film highlight and advancements made in telephone technology during that time. The kids finally make it to the Needle by the end of the film. You can view it on AT&T’s channel on YouTube.

And Mariner Films created the short documentary film, simply titled "Seattle World’s Fair". The Needle itself isn’t shown much here, but you’ll see the International Fountain, the infamous “bubbleator” and more. You can watch it on the Seattle Channel on YouTube.

Now, movies where the Space Needle made a grand appearance:

"It Happened at the World's Fair" (1963)
No other movie features the Space Needle more prominently than this Elvis Presley flick and as the name suggests, the story (or lack thereof) takes place at the 1962 Seattle Worlds Fair. The film features a scene with Elvis dining at the Space Needle restaurant with a nurse working at the fair. It's humorous because the nurse suggests that they get a bite to eat at the needle as if it was a local hamburger joint. The movie itself isn't all that great (unless you are a huge Elvis buff) but vintage footage of the Seattle Center grounds is enjoyable to watch.

"Austin Powers 2: The Spy Who Shagged Me" (1999)
This comedy pokes fun of both the Needle and Starbucks by making the landmark Dr. Evil's headquarters. The Needle doesn’t get a lot of screen time, but it’s there.

"Chronicle" (2012)
This “found footage” film involves three teens who discover that they have gained telekinetic powers from some strange object that fell from the sky. One scene features a teen consumed with the need for power who rises up to the windows of the the Needle and shatters the glass harming the people inside the former Sky City Restaurant. The real restaurant closed five years later. Coincidence?

"The Parallax View" (1974)
This political thriller film starring Warren Beatty opens with the assassination of a presidential candidate inside the Space Needle followed by the pursing of the killer on top of the Needle’s roof! It’s frightening realistic. You’ll also find a river scene filmed at Skagit River’s Gorge Dam.

"Grey’s Anatomy" (2005-)
Since Grey’s Anatomy has been on the air since 2005, you’ve probably heard by now that the fictional Seattle Grace Hospital’s helipad is actually the one used at KOMO Plaza. It sits right across from the Space Needle. Most of this prime time soap is filmed in Los Angeles, but the show does send crews and some cast members to the Emerald City from time to time to film brief scenes to make the show more believable.

"10.5" (2004)
The Space Needle itself only appears during the first 15 minutes of this two-part, disaster-themed miniseries before it crumbles and crashes spectacularly on the pavement during a 7.9 earthquake. After the airing of the special local TV station KING 5 explained the inaccuracies relating to the toppling of the Needle during the evening news, (i.e. the needle is actually made of steel, not concrete and is designed to withstand up to a 9.0 earthquake).

"Seattle Superstorm" (2012)
This film was just one of many disaster movies that have aired on the Syfy channel before being released on DVD. The trouble begins when a unidentified object is shot down by the military and crashes into Puget Sound causing a variety of strange weather issues including (but not limited to) earthquakes, tornados and lightning strikes. Not a single shot of this made-for-TV movie was actually filmed in town. And as for the Space Needle, it suffers a similar fate shown in 10.5, but the CGI is not nearly as good.

"Frasier" (1993-2003)
Technically, the Space Needle was featured in every episode of this "Cheers" spin-off series in animated form during the opening credits. An image of it also appeared outside of Frasier’s balcony window. However, it was the show’s 100th episode (“The 1000th Episode”) celebrating the doctor’s 1,000th episode of his radio show) where the Needle played host to “Frasier Craine Day” where everyone, including then Mayor Rice, showed up in appreciation. Other Seattle locations shown included the Pike Place Market and the Monorail.

"Roboshark" (2015)
This Bulgargian/Canadian movie (also known as "Robo Shark vs. Navy Seal"), which also premiered on SyFy Channel, has been called a “tongue-in-cheek creature feature” which unlike 10.5 and Seattle Superstorm, was actually filmed in Seattle. The bizarre storyline features a shark/computer hybrid who can follow people anywhere including the Pacific Place Mall! And once again, its curtains for the Space Needle.

"Death Note" (2017)
Netflix premiered this film which was adapted from the Japanese manga series of the same name. Here, a high school student finds a mysterious notebook that has the power to kill anyone whose name is written on its pages. And so, as one does, he goes on personal crusade to rid the world of criminals. Much of the story takes place in Seattle but it is Seattle’s Great Wheel that gets the big scene at the end, not the Needle.

The Space Needle has even found itself in the world of cartoons. Fighting crimes must have been pretty lucrative for Scooby-Doo and the gang since they are seen dining at the Eye of the Needle restaurant twice in the episode, “A Frightened Hound Meets Demons Underground.” The outside looks only vaguely like the Space Needle and is colored red.