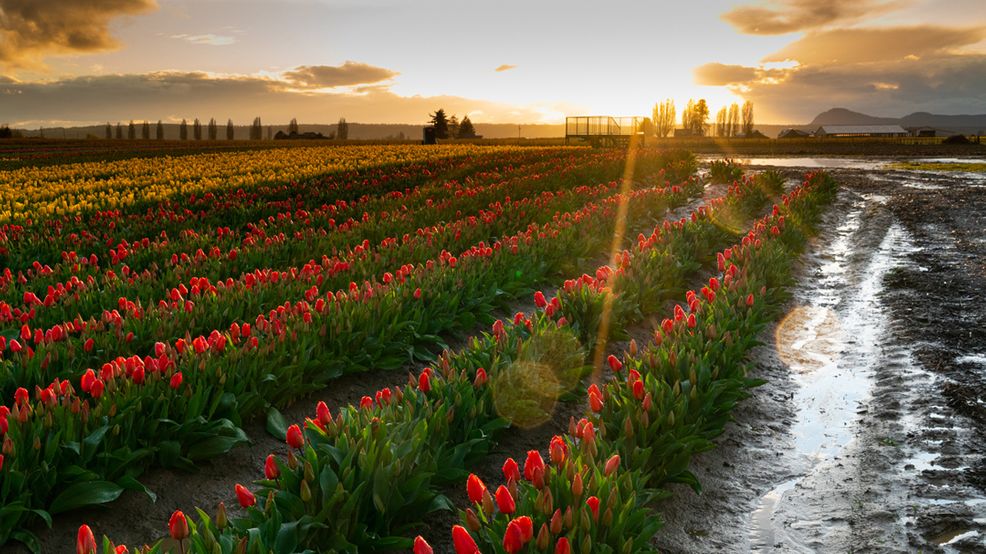 Skagit Valley natives adapt to save Tulip Town amid COVID-19

Five long-time friends headed in different directions after graduating from high school, but a shared love brought them home.

After pursuing different career paths like law, tech and business - an idea sparked when they reunited about 25 years after graduating high school. The five friends decided to found Spinach Bus Ventures, a company focused on promoting community and developing the economy in the place they grew up.

"We just started talking about the valley and, you know, there's so much beauty and potential here," said Speer. "It wasn't really anything planned, it kind of feels like a calling that none of us really expected."

Purchasing Tulip Town, a tulip farm previously operated for more than 30 years by the previous owners, was their company's first investment this past June.

Just nine months later, they were preparing to open for their inaugural season as owners and operators. But that wouldn't happen.

Gov. Jay Inslee's "Stay Home, Stay Healthy" order went into effect in mid-March to slow the spread of COVID-19, a decision that essentially canceled the festival for the first time since 1984 and shut down the farm. The notion that this was actually happening hit the team about a week before Inslee announced the shutdown.

Tulips bring in hundreds of thousands of tourists to Skagit Valley each year. Not being able to open is not only a substantial economic hit but also to the community who look forward to it every year.

"I knew that this was a $65 million opportunity that could evaporate. If tulips are no longer grown commercially in Skagit Valley, then our community is going to miss out on a lot of income. That's a lot of jobs, a lot of businesses that are just not going to make it back," Miller said. "What can we do to keep tulips viable?"

"We have an amazing expression of these flowers that we spent 10 months growing, people want to have a connection to these flowers," he said. "We don't scare too easy - we innovate."

The coronavirus pandemic is an evolving and unpredictable situation, meaning the team must also be ready to adapt as things change. In a matter of weeks, the Tulip Town team has rolled out several new ways to get their tulips to the community.

People can get bouquets delivered to their homes nationwide or stop by the farm's roadside stand to pick some up. Tulip Town is also in the process of launching an app and virtual tours. Color for Courage is a program where people can donate a bouquet of tulips to places like hospitals, nursing homes and police stations that will be delivered as a "thank you" to those working on the frontlines of the pandemic.

"Tulip Town has been a bright spot amidst this outbreak," said Jennifer Fischer, the special events and corporate relations officer of Overlake Medical Center. "They've delivered hundreds of bouquets to our hospital over the last few weeks. It's been wonderful to pass out the tulips and see the smiles on our caregivers' faces."

Tulip Town is also partnering with other businesses, like Canlis. The iconic Seattle restaurant has created Canlis Community Supported Agriculture boxes with items from local farmers — including tulips.

That's not all. Some other ways Tulip Town has adapted:

Howard, Keltz, Miller, Ward Sparwasser and Speer grew up in the fields of Skagit Valley. When they purchased Tulip Town last year, the last thing they anticipated was not being able to open for the season.

But the "overwhelming" support of their community has inspired them to push forward and find new ways to keep it going.

"Our tulips, they aren’t about us. They are about all of us. We know that together we will turn these challenges into opportunities," said Miller. "It might take a village to raise a child, but it’s going to take a community to save the tulips."

Visit tuliptown.com for more information on how you can support and purchase tulips.