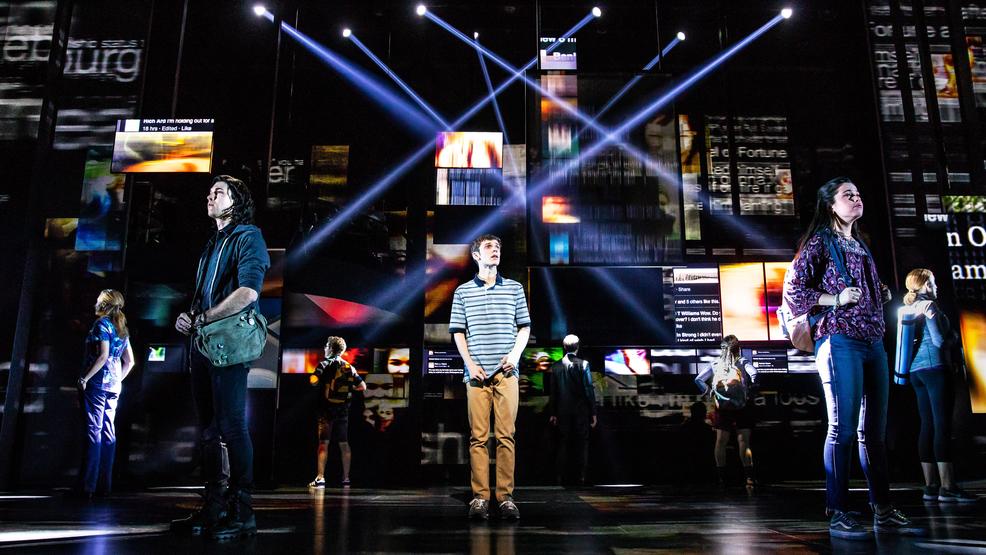 These are all descriptions of "Dear Evan Hansen", the emotionally relatable hit musical that is Broadway's current darling. So you can imagine the excitement in the Emerald City when it was announced that it would be stopping for a brief (15 performance) run at the Paramount Theater this winter. People scrambled for tickets that were selling fast (and at high dollar amounts), and pretty soon a Lottery System similar to last year's 'Hamilton' frenzy was enacted.

I was lucky enough to be granted a press pass for Friday's show at the Paramount, and I went in with high, high, high hopes. Sometimes this can make me nervous - when you've heard so much hype about something that it feels almost impossible for the reality to match the idealist vision you have. I took my friend Candice, who also writes for Seattle Refined has a movie reviewer. If you've read her reviews, you know she's hard to please, and gives it to you straight. Her quippy remarks and strong opinions are some of my favorite things about her (I also really like her daughter and her dog). When she likes something - STOP THE PRESSES. It means it's good. Really, really good.

I, on the other hand - am pretty easy to please. I love a sappy, simple plot line - I'm not looking for the deeper meaning behind the things that are meant to entertain me. If it happens, great! If it doesn't - I'm not broken up about it. I cry really easily, and tend to be overly invested in pretty much any character you put in front of me.

So I've painted the picture as we walk into the theater last week. We both watch the show, then look at each other as the crowd rises in a standing ovation. Me, with mascara running down my face. Candice, looking like she's just changed her child's diapers. Yup - we had COMPLETELY different takeaways, and instead of writing just a straight-up review, we thought it would be fun to do a little She Said/She Said.

She Said: '5/5 Stars. Every high-schooler should watch it' - Britt

The play follows Evan Hansen, an awkward and lonely high-school teenager who is struggling to make connections, both IRL and socially (aka the two different worlds kids live in these days). Evan's desperation to make friends and be happy immediately endeared me to him. I was lucky enough to not be bullied at school, but I read the news - I know the type of bullying Evan faces in the show happens all the time in high school throughout the world. Even more heart-breaking is the desire for Evan's single mother to connect with him. She's doing everything right - checking in, asking how his day is, giving him pep talks - but it's not enough, and not helping. I don't want to get too much into the details of the plot, since a LOT happens, but the chords of teen angst, depression, anxiety, suicide, bullying, love and acceptance are played heavily, again and again. And every dang time, I lose it I cried about every five minutes, any time the mother walks on the stage, and towards the end - just any time any character looked sad (which is, kinda all the time).

I loved it. What's more, I think it's SO important. It was not at all what I was expecting - and walking away I didn't have the 'high-on-life' experience I had had when coming out of 'Hamilton'. There are really no happy/feel-good moments - the show is relentless in it's application of the real-life stressors of our digital world, and it's impossible to get caught up in the fiction of the moment, because you know it's not really fiction. I think every single high-schooler (and maybe even middle-schooler?) should watch this, and it's made me think for days after seeing it.

I give it four out of five stars, and would go see it again and again, and recommend it to anyone else interested in learning more about the challenges teenagers growing up in the weird world are facing.

I’m going to give a very unpopular opinion: “Dear Evan Hansen” is just alright. “Are you blind? Are you deaf? Is it not the musical of a generation?” No. No. Dear God I hope not.

Friends and acquaintances, mainly those on the younger end of the lifespan spectrum, have professed their undying obsession with 'Dear Evan Hansen'. Being a culturally woke person, I figured I’d fall into its grips handily. But if I said I was changed upon leaving the Paramount last week, then I’d be a total fraud. When it comes down to it, “Dear Evan Hansen” was too one-tone for my taste. Sure, its message that “Everyone Matters” and, more broadly, “Be Kind”, is sweet and endearing, but the end, in this case, doesn’t justify its bleak means, which, if I’m being blunt, is not really all that fun.

The music is good – more than good, beautiful and memorable – and the acting exceptional. That's why I'm giving it two of five stars. As for the rest - there are laughs here and there, but not nearly enough. If I’m sitting three hours in a lightly tufted seat, then there should be more laughing than crying. It’s the other way around in this case, except I didn’t cry, but sat in an uncomfortable limbo, feeling cold-hearted for my lack of tears and embarrassed for inexplicably chuckling at inappropriate times.

Have you seen it? Let us know what you think. Tickets are still on sale (though pricey), or you can try your hand at the Ticket Lottery.